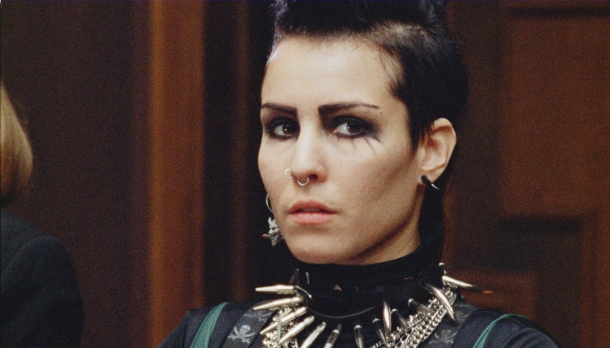 I am usually not a fan of trilogies; the third film often pales in comparison to the crescendo of emotion and suspense built in a series.  And while the occasional exception exists (Return of the King), most (Godfather 3, Alien 3, Terminator 3) are substandard when you compare them to their phenomenal predecessors.  Would The Girl Who Kicked the Hornet’s Nest, the third installment in one of the best-selling trilogies, suffer the same fate?  Perhaps.  But how could I resist the lure of Lisbeth Salander, arguably one of the most interesting, unique and feminist heroines that has ever graced the page or screen?

The Girl Who Kicked the Hornet’s Nest is the final film in the Millennium Trilogy, which also includes The Girl with the Dragon Tattoo and The Girl Who Played with Fire.  GWKTHN picks up right where the second film leaves off.  Punk hacker and researcher Lisbeth Salander is in critical condition after surviving a gunshot wound to the head, shoulder and hip.  In the same hospital two doors down, her mortal enemy, the sinister Zalachenko, also recovers from life-threatening wounds.  While Salander fights for her life physically, she must also prepare for an emotional battle of wits as she must stand trial for crimes committed as well as prove her mental competency.  Salander’s friend, journalist and magazine publisher Mikael Blomkvist, continues his unwavering support.  He races to prove her innocence, uncovering a treacherous government conspiracy to silence Salander.

I’ve been engrossed by the movies and books written by the late Swedish author Stieg Larsson.  So I couldn’t wait to see how the story ends.  My mother used to always say that a sequel was only good if you could watch it without seeing the other movie(s) in the series.  The Girl Who Kicked the Hornet’s Nest would be difficult to watch without seeing the first two or reading the books.  This is truly a film belonging to fans of the trilogy.  With a different director, Daniel Alfredson, at the helm, it doesn’t stand alone as well as the first or even the second film.  The movie suffers from a choppy pace.  But the action scenes, such as the shootout in Samir’s restaurant and a police raid, are choreographed effectively.  But it’s the powerful performances by Noomi Rapace as the tattooed sullen survivor and Michael Nyqvist as the obstinate and passionate Mikael Blomkvist that elevate the material. 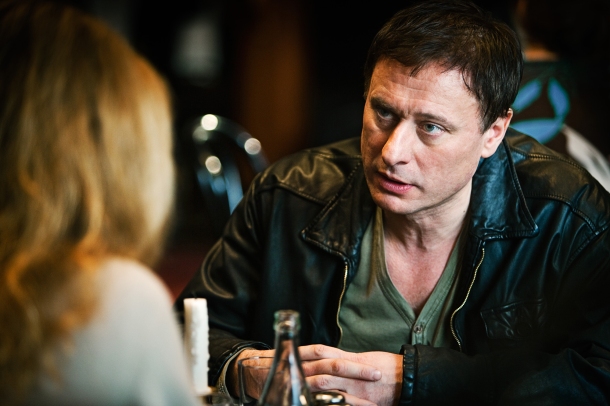 Not surprisingly, there are differences between the book and its movie adaptation.  Annika Gianinni, Salander’s lawyer, is made to seem less competent.  In the book, she kicks ass during the trial in her flawless cross-examination of Salander’s childhood psychiatrist, slimy Peter Teleborian, who claims she needs to be institutionalized.  But in the movie, she portrays far less resolve.  Also, it’s never mentioned that Gianinni specializes in domestic violence and sexual assault cases, which spurred Blomkvist, her brother, to ask her to represent Salander.  To my delight, the film retains the strong female police officers Monica Figueroa and Sonja Modig.  Thankfully, the film cuts some extraneous storylines like Blomkvist and Figueroa as lovers.  The subplot involving Erika Berger, Blomkvist’s best friend and editor of their magazine Millennium, concerns her taking a job at another publication and receiving sexually explicit emails from a possible stalker.  In the film, Berger never leaves Millennium and doesn’t support Blomkvist’s stubborn investigation when it jeopardizes the safety of the other journalists.  She still receives threatening emails but the film removes the whole premise of sexual harassment in the workplace, slightly diminishing Larsson’s theme of misogyny, preferring to focus on the government corruption. 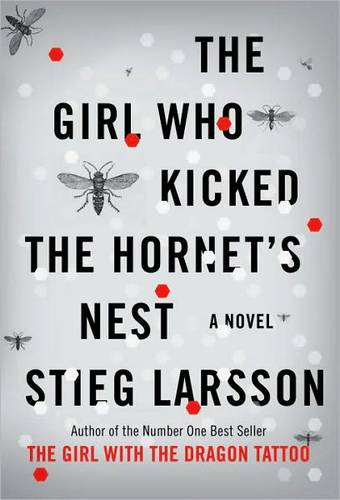 In the U.S., the first book entitled The Girl with the Dragon Tattoo, altered from its original Swedish title Men Who Hate Women.  The Swedish name conveys the theme of misogyny Larsson carries throughout the entire trilogy.  The first book contends with sexual assault, rape and domestic violence.  The second book confronts sexual trafficking.  The third book shows sexual harassment in the workplace.  The trilogy depicts all of the different manifestations of men’s hatred towards women.  To me, that was one of the things I enjoyed most about Larsson’s books: his ability to seamlessly fuse social justice with compelling characters and an interesting plot.  Removing it somehow neuters the book’s message.  The Girl Who Kicked the Hornet‘s Next’s original title is The Air Castle that Blew Up, with “air castle” referring to a “pipe dream.”  It’s interesting to note Larsson’s original titles because only in the second one does he reference “girl” and in that particular book, he’s referencing Salander as a child.  In the U.S., while they infantilize her in the titles, sadly reducing her to a “girl” rather than a “woman,” publishers shrewdly put Lisbeth Salander front and center, for she is the primary reason to read the books and watch the films.

Salander endured rape, assault and institutionalization; her rights throughout the trilogy have been violated.  Yet she refuses to be a victim.  Salander steels herself, always ready to fight back.  For her trial, she dons a “costume” of garish goth make-up, mohawk hair and ripped clothes in court.  She wasn’t going to pretend to be something she wasn’t; she had nothing to hide.  This speaks to Salander’s strategy, a point not fully conveyed in the film.  While Blomkvist, lawyer Gianinni, and her friends Plague, Holger Palmgren, and Dragan Armansky come to Salander’s aid and rally around her, she is an equal participant in her defense.  Asphyxia is the program she designs to infiltrate people’s computers, which hacker Plague uses to uncover information on a trial witness.  But if you hadn’t seen the other films or read the book, you’d never know that Salander’s brilliant mind invented the program.  The last scene of the movie ends differently from the book too, detracting from Lisbeth’s emotional growth in learning to allow people into her life. 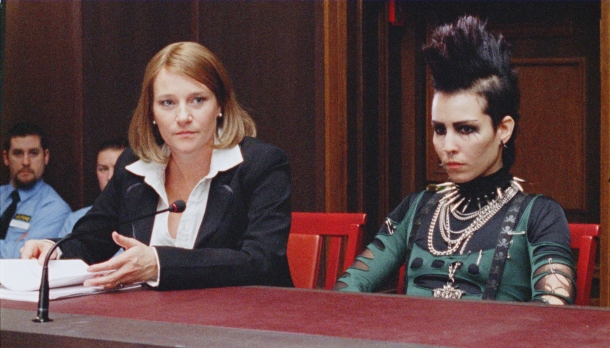 Actor Noomi Rapace brings the kick-ass heroine to life, imbuing her with strength and complexity.  Despite a bedridden Salander for half the film, a complaint some reviewers have expressed, Rapace captivates.  Beyond her dedication to the role (she trained for 7 months in preparation), she has a knack for conveying a range of emotions with a tilt of her chin or a narrowing of her eyes.  Yet she’s underutilized here.  I kept craving more Lisbeth, more Rapace…for me the two have become inextricably intertwined.  I can’t imagine anyone else in the role, particularly as Hollywood gears up for Lisbeth Salander mania as actor Rooney Mara will attempt to fill Rapace’s shoes in the U.S. version.

My fave blogger Melissa Silverstein at Women and Hollywood had the opportunity to chat with the indomitable Rapace (so jealous!).  When Silverstein asked Rapace why she thinks women relate to Lisbeth Salander, Rapace replied,

“She does not complain and she doesn’t accept being a victim. Almost everybody has treated her so badly and has done horrible things to her but she doesn’t accept it and won’t become the victim they have tried to force her to be. She wants to live and will never give up. I find that so liberating. Her battle is for a better life and to be free and I think everybody experiences that at some point in their life. They say OK, I’m not going to take this anymore. This is the point of no return. I’m going to stand up and say no.  I’m going to be true to myself and even if you don’t like me that’s fine. I don’t want to play the game of the charming nice sexy girl anymore, I’m me. I think everybody can relate to that.”


It was interesting watching this film and juxtaposing it with For Colored Girls which I also saw this past weekend.  Both convey the pain men can inflict on women; both show women struggling to not just survive but thrive.

What continues to fascinate me about Lisbeth Salander is her defiance to yield, living life on her own terms.  She doesn’t wait for justice to come from the authorities; she’s a warrior wielding her own vindication.  Salander continually challenges categorization, refusing to be defined by her looks, her sexuality or her gender.  She defines herself; a powerful message that we as women and as a society don’t hear often enough.  I’m going to miss Lisbeth Salander.

The Girl with the Dragon Tattoo here.

4 thoughts on “Enemy of the State: Heroine Lisbeth Salander Fights Back in ‘The Girl Who Kicked the Hornet’s Nest’”