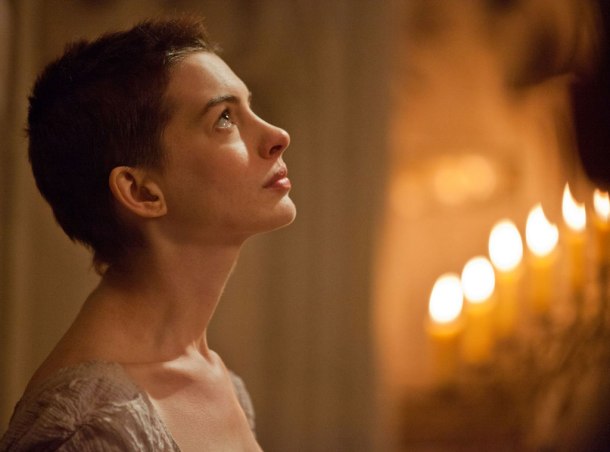 Some writers, like professor Stacy Wolf, have enjoyed yet criticized the film adaptation of Les Miserables for not being feminist enough and turning the female characters into “bit players.” While others have lauded its feminism. Sure it irks me yet another film focuses on the journey, salvation and redemption of a man. We clearly have enough of those. But that ignores the importance of women in Les Mis. It ignores how, as Bitch Flicks writer Leigh Kolb astutely points out, a film featuring poverty and class struggles is feminist.

I have loved Les Miserables for years. After reading it in junior high, the book absorbed me — the horrific tragedy, pain and oppression. The vivid characters and their stories stirred and moved me. I immediately went out and bought the soundtrack, falling under its spell. 5 years later I saw it on Broadway, it mesmerized me. So when I heard a film adaptation of the musical? With Anne Hathaway and Hugh Jackman? With live singing?? Hearing Samantha Barks as the awesome Eponine belt out “On My Own?” Oh yeah. Saying I was psyched was definitely an understatement.

Sure the numbers 24601 will always be synonymous with Jean Valjean and the cruel incarceration he faced for stealing a loaf of bread. And yes, I love the standoff between Valjean and Inspector Javert or the passion of Enjolras at the barricades. But the person who has haunted me the most throughout the years? It wasn’t any of the men. It was Fantine.

Anne Hathaway embodies the tragic role, giving a phenomenal, powerful and transcendent performance. She deserves all the hype and accolades she’s received. I’ve always been a fan of Hathaway in anything from Rachel Getting Married to The Devil Wears Prada. But she takes acting to a whole other level in this devastating performance. In “I Dreamed a Dream,” the show-stopping tragic song — which btw, made me weep in ragged sobs in the movie theatre…oh fuck, who am I kidding, even when watching the trailer too — Hathaway pours every emotion, every ounce of herself into the role. She trembles, rages, weeps. Her voice wavering from angelically soft to ragged and hoarse. Her performance alone is reason to watch the entire film. No joke. She’s that outstanding.

Fantine is the archetypal sacrificial mother, giving up everything for her daughter Cosette. But Fantine transcends merely rearticulating tropes and archetypes. Fantine is downtrodden. Life has beaten her down. The tigers at night have torn her hopes apart and crushed her dreams. Hathaway imbues Fantine with a fiery passion balanced with forlorn desperation. She’s angry at her circumstances, angry at her pain, desperate to save her daughter.

Fantine also illustrates the plight of single mothers. Single mothers are 5 times as likely to be in poverty, many working in low-wage jobs without paid sick leave. Fantine struggles to make ends meet to pay for Cossette who lives with the greedy and villanious Thenardiers, at the expense of her own health as she eventually gets ill with tuberculosis.

Fantine works in a factory and is fired after the lecherous foreman discovers through her gossipy coworkers (gee, thanks for the female camaraderie, ladies) that she has a daughter out of wedlock whom she sends money. When she’s thrown out on the streets, Fantine has nowhere to turn. She eventually sells her locket and her prized luscious locks. But then she sells the thing that always makes me shudder. Her teeth. And then, when she has nothing left to sell, she sells her body becoming a sex worker. She sells herself.

Anne Hathaway tried to relate to her character but couldn’t as their lives wildly diverge. But she realized that while Les Mis is a period piece, it parallels the struggles women face today, particularly with Fantine being forced into sexual slavery. Hathaway (who has come out in support of the One Billion Rising campaign to fight violence against women) said:

“There was no way I could relate to what my character was going through. I live a very successful, happy life. I don’t have any children that I’ve had to give up…or keep.  So I tried to get inside the reality of her story as it exists in our world.  And to do that, I read a lot of articles and watched a lot of documentaries and news clips about sexual slavery. And for me, and this particular story, I came to the realization that I had been thinking about Fantine as someone who lived in the past, but she doesn’t. She’s living in New York City right now, probably less than a block away.  This injustice exists in our world.  So every day that I was her, I just thought ‘This isn’t an invention. This isn’t me acting. This is me honoring that this pain lives in this world.’ I hope that in all our lifetimes, we see it end.”

As Ms. Magazine‘s Natalie Wilson points out, the distinction between sex worker and sexual slave is crucial:

“Her framing of Fantine as a sexual slave, NOT a prostitute, is key, as it refuses to glorify or joke about what is so often swept under the rug regarding sex work: that the majority of women do not “choose” it but are forced into it.”

Traditionally, people view the sex industry in two ways. There exists a range of ways to be in it, either by choice, circumstance or coercion, but regardless it’s work and we must make it safe for sex workers and regulate disease. Or the sex industry is a form of violence against women and girls, exploitative and a form of gender-based violence.

Choice is the keystone in the argument. Do people choose sex work? Or are they forced into it via trafficking? Or do they choose it only because they have no other options or means to earn a living, negating its categorization as a “choice?”

In the book Half the Sky, Nicholas Kristof and Sheryl WuDunn “confront the liberal myth that prostitution is a voluntary vocation for women.” As a reproductive justice advocate, I believe a woman’s body should be her legal and personal domain. Some sex workers choose their profession willingly. But too many women – 3 million women and girls – are forced into sex trafficking. Traffickers coerce, beat and rape women into submission. Trafficking is human slavery, a human rights travesty. Numerous women, children and men are savagely sold. Whether people choose sex work willingly or are trafficked, they shouldn’t face criminalization. People who’ve survived trafficking lose jobs or can’t get jobs due to convictions.

Les Mis fuses these two views. It shows that sexual slavery is exploitative and a human rights violation — Fantine enters sex work for she has no other choice, she has no other way to earn money. But it simultaneously reinforces that we shouldn’t punish sex workers for their circumstances. Les Mis doesn’t devalue, demonize or erase the humanity of those in sex work.

Some assert Les Mis suffers from outdates gender roles and gender stereotypes. Sure it’s set in 1810s-1830s Paris and Victor Hugo wrote it in 1862. But that doesn’t mean we can’t or shouldn’t critique Les Mis through a current lens, especially considering the film is current. But I don’t think Les Mis is chained to the past.

Sexual slavery and oppression aren’t merely in history books. Women today face poverty, trafficking, domestic abuse, rape, assault. Even if we don’t personally confront these struggles, we all must deal with binding constrictions of sexism and rape culture, which Les Mis illustrates.

When Anne Hathaway infamously (and awesomely!) shut down Matt Lauer’s douchebaggy slut-shaming on the Today Show after paparazzi took a crotch shot of her, she said:

“Well, it was obviously an unfortunate incident. Um, I think — It kinda made me sad on two accounts. One was that I was very sad that we live in an age when someone takes a picture of another person in a vulnerable moment and, rather than delete it, and do the decent thing, sells it. And I’m sorry that we live in a culture that commodifies sexuality of unwilling participants, which brings us back to Les Mis, because that’s what my character is — she is someone who is forced to sell sex to benefit her child, because she has nothing and there’s no social safety net. And I— Yeah, so, um, so let’s get back to Les Mis.”

Hathaway is right, Fantine — and so many other women like her — have no safety net. Without healthcare, education, paid sick leave, adequate day care and social assistance programs, today’s impoverished single mothers have few options.

Les Mis also sheds light on rape culture. After Fantine fights back against a man harassing her, putting snow down her dress, she’s the one punished, not the assailant. Inspector Javert wants to arrest Fantine, reinforcing a victim-blaming rape culture which criminalizes and demonizes women’s behavior and punishes victims/survivors, rather than the perpetrators of abuse and assault. With the global rape epidemic now taking center stage — Steubenville, Jyoti Singh Pandey in India, Notre Dame’s rape cover-up — we must question how we as a society perpetuate and enable violence against women.

Feminism and social justice push us to not only see the world from our own perspective and privilege. But to see it from others’ perspectives and circumstances as well. Now I recognize it’s problematic that Fantine can only achieve salvation and peace in death. Or that she becomes a saintly sex worker, a symbolic Mary Magdalene. But through Fantine’s eyes, we see the horrors of poverty, sexism and rape culture. She symbolizes the oppression women combat — throughout history and today.

Fighting oppression, looking at the intersectionality of gender and class, critiquing – these are the core of Les Mis’ message. Isn’t that what feminism is all about?
EDITING NOTE: This article originally used the words “prostitute” and “prostitution” as well as “sex worker” and “sex work.” But the former terms have been edited out as many sex workers find “prostitute” offensive.