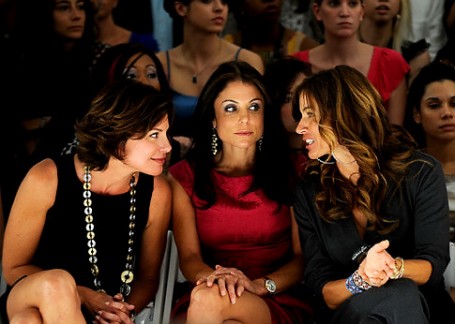 Catfights have always garnered TV ratings and box office dollars.  Last week, Bravo aired the Real Housewives of New York City reunion in 3 parts (I mean seriously, did they really need 3 episodes?!) dishing and rehashing their verbal catfights from the past season.  On Hell’s Kitchen with Gordon Ramsey, chef Autumn continually told the camera how glad she is to be on the men’s blue team as women are so catty.  This is certainly not anything new or groundbreaking.  But it got me thinking about how we view women in our society, particularly how movies and TV portray women.

Last week, Vanessa Carmichael wrote in the Huffington Post about the Real Housewives of NYC and how their backbiting antics discredit women:

“We enjoy seeing the metamorphosis of Alex who went from a dignified adult woman to the Shannon Doherty Heather. We like to see Kelly pick fights with women she is no match for who in turn eat her alive. We like to see the Countess picking on everyone’s manners, which isn’t good manners, by the way; Jill Zarin mastering one-upmanship; and we like to see Ramona turn into a messy mean drunk. Above all, we love to see Bethenny Frankel slay her cast mates with one venomous comment after another.”

Carmichael is spot on; we enjoy watching emotional trainwrecks and verbal smackdowns.  While part of me relishes watching the crazy drama as a guilty pleasure, I’m still saddened that the media perpetually pits women against one another.  Now don’t get me wrong, I adore verbal sparring and watching women warriors battle it out.  But cattiness is different; it invokes malice and belittlement, verging on cruelty.  We should be cautious of the message movies and TV deliver about women.  Too often, women’s roles are relegated to simplistic caricatures, frequently in a virgin/whore dichotomy.  Women are far more complicated and nuanced than Hollywood would have us believe.

Cheryl Dellasega, PhD, discusses in her book, Mean Girls Grown Up, how many TV shows including makeover shows, competitive reality shows (like Survivor, The Bachelor) as well as “dramedys” like Desperate Housewives, often make women rivals.  Rather than embracing sisterly camaraderie, women become combatants fighting for men or attention.  She writes,

“Unlike men, however, who are inclined not to aggress against men in general or their friends in particular, women do both…Television shows and movies urge women to compete with one another in openly aggressive ways, the more extreme the better.”

In previous blog posts, I’ve shared my love of Sex and the City and Golden Girls.  The antithesis to catfights, these shows celebrated women’s friendships (as did the show Girlfriends which I also loved), all while exploring their diverse perspectives and honoring their lifestyle choices.  Many have criticized SATC2 for its overt display of consumerism, which is interesting as men in films often portray rich playboys flaunting their wealth a la James Bond.  While the show and movies highlighted fabulous fashions, it was done so in a fun escapist way, rather than a way to substitute personal fulfillment.  Rather than women competing against or demeaning each other, the crux of the story has always been the importance of girlfriends.

In her latest book Enlightened Sexism, Professor Susan J. Douglas (Where the Girls Are) exposes how women continually receive conflicting sexist messages in pop culture.  The media subverts women’s frustration with these contradictory images by telling them to achieve salvation through consumerism and control of their bodies, inadvertently fueling the “mean girl” fire.  Douglas argues,

“So by selling us the ‘faux feminism’ of freedom through skin creams and control through pantyhose, they urge us to substitute consumer feminism for the real deal…young women in particular, lament the gap between image and reality and the impossibility of bridging it.  Whether they know it or not, they are missing feminism.  There is an anger, however repressed, about how unforgiving this new boilerplate femininity is and an instinct, however thwarted, to fight back.  There is a desire for female solidarity based on having to figure out how to live, still, in a male-dominated world, rather than on having to lose five pounds.  Girls and women with plenty of help from Lancôme, Diet Pepsi, and the bathing suit industry, have learned to turn this sense of loss and this anger in on themselves, of course.  But with the rise, and hyperinflation, of the mean girl dramas, the media have done something else: provided fresh new scripts for where girls should really direct their frustration and rage – against one another.”

This is why feminism is still important today: because we have not yet achieved equality, neither in the corporate world or on-screen.  Not everyone may identify as a feminist.  Yet whether we recognize it or not, we yearn for female empowerment.  We don’t need to buy into the bullshit stereotypes that the media shoves down our throats.  We don’t need to cut other women down to size to make ourselves feel better.  Remember that we don’t have to play the role of the mean girl in order to be truly powerful.

5 thoughts on “Mean Girls: Cattiness in Media Pits Women Against Each Other”