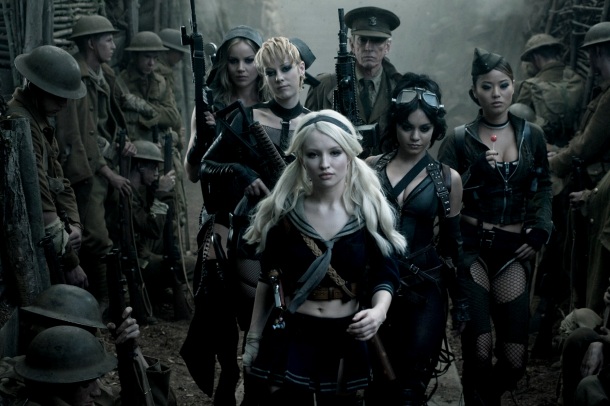 Once again, I fell for the siren song of a Zack Snyder movie.  He lured me with a provocative, eye-catching trailer, all with the hopes of a great film; this time, a potentially feminist film!  But just as in times past, as he did with 300 and Watchmen, he let me down.  Perhaps that’s what he should stick with, 2 minute trailers.  But I couldn’t resist a film with not one but multiple female characters.  So my bestie John, film critic at Hello, Mr. Anderson and I headed off to see Sucker Punch.

Set in the 1950’s, Sucker Punch features a 20-year-old woman (Emily Browning) whose abusive stepfather institutionalizes her in a psychiatric hospital.  Facing an impending lobotomy, she dreams of escape with other patients through an illusory fantasy within a fantasy.  Through her imagination, the story shifts back and forth between reality, an imaginary burlesque brothel and a mythical fighting quest.

Let’s start with the things I DID like.  I thought the concept of a dream within a dream a la Inception, while not unique was still a great idea.  I loved that there were several female characters (and a multi-racial cast to boot!) and that 5 of the young women institutionalized work together to escape.  Writer/director/producer Zack Snyder told Entertainment Weekly, “I already did the all-male cast with 300, so I’m doing the opposite end of the spectrum.” I have to give Snyder kudos for wanting an all-female cast.  Although this isn’t actually an all-female cast as in say a film like Descent, and he completely ignores Queen Gorgo in his film 300 played fabulously by Lena Headey (to me the most interesting character in that god-awful wreck of a film).  And the visuals are lush and stunning.  While Sucker Punch feels like an overblown music video on steroids (apparently a trademark of Snyder’s), the soundtrack, particularly the use of Bjork’s powerful and eerie “Army of Me” and Emiliana Torrini’s cover of Jefferson Airplane’s “White Rabbit,” was fantastic.  Sadly, that’s where my positivity ends.

Sucker Punch is such a hot mess; so many things went horribly wrong.  While the film features female characters, none of them possess any depth whatsoever.  Wrought with trite dialogue and no character development (clearly something Snyder is allergic to), this film exists as nothing more than eye candy.  The most interesting character is Sweet Pea (Abbie Cornish) and I attribute that to the stellar acting abilities of Abbie Cornish (watch her in Bright Star if you haven’t seen it yet…she’s amazing) who’s clearly making the most with what little material she was given.  I mean what the fuck are Abbie Cornish and Jon Hamm (or for that matter any of these actors) doing in this piece of shit?! 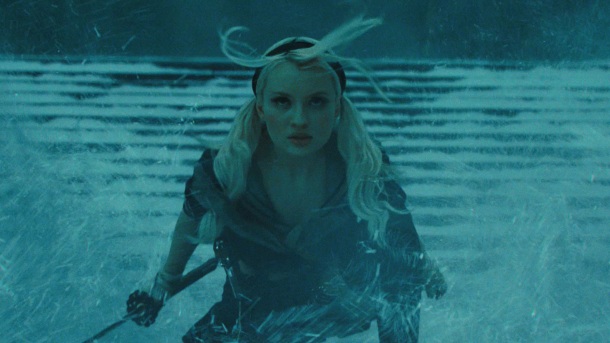 All of the women are hyper-feminized and infantilized sex toys.  They don ridiculous garb (I know it’s a fantasy action film but c’mon) and all are bestowed with cutesy nicknames (Rocket, Sweet Pea, Baby Doll), none of which they choose for themselves.  But the worst offense is the portrayal of Baby Doll (Browning), the protagonist of the film.  With her bubble gum pink cheeks, spidery lashes, hair swinging in pigtails and her schoolgirl-esque costume baring her midriff…she’s a pervert’s fantasy.  For the first 30 minutes of the film, Baby Doll doesn’t even an utter a word.  And the way the brothel fantasy world shifts into the fighting world happens when (brace yourself) Baby Doll dances like a seductive Salome, she mesmerizes all who watch, allowing her to slip into the other fantasy world to complete the next task on her quest towards escape.  Towards the end of the film, Baby Doll tells another character, “This was never my story,” another attempt to strip her of her voice.

And speaking of voice…despite the majority of female characters, the person with the most lines is a fucking creepy dude played by Oscar Isaac.  In the trailer, it appeared that Carla Gugino’s character granted guidance and wisdom to the girls since it’s her voice you hear narrating the clip.  But in the film, it’s actually Scott Glenn who fills that role. A man.  It’s as if Snyder had to make a film with women palatable by having his female characters in sexy costumes and with men lending a hand cuz you know we women can’t figure things out on our own without men.  How fucking empowering is that?!

While an original film (Snyder’s first non-adaptation) it’s evocative of a comic book or anime.  Now, I love action films (Aliens, Terminator, Kill Bill), comic books and superheroes.  Witchblade, Catwoman, Wonder Woman, She-Hulk and X-Men are just some of the series that boast strong female characters.  But this film pisses all over female empowerment.  While to my chagrin, female superheroes often wear skin-tight garb covering their thin physiques and ample bosoms, for me, the appeal of kick-ass women is that they are (or rather can be) intelligent, strong, self-sufficient and independent.  Through physical training, they achieve discipline and outer as well as inner strength.  But here, there is no physical training; it’s all an illusion.  And while I do enjoy fighting battles physically as an allegory for fighting internal struggles, it runs amok here.  In both the reality and brothel realms, the women continually face assault, murder and rape from the men.  Yet in each of the fighting sequences, the women fight dragons, robots and other mythical creatures; almost as if men prove to be too strong or capable of foes for women to fight.

The film is about as subtle as a sledgehammer.  When the Wise Man (Scott Glenn) advises Baby Doll the items she’ll need to obtain to escape, the camera zooms in on each item lingering for quite some time. We get it, Zack…no need to bludgeon us with your imagery.  In another domination confrontation, Blue (Oscar Isaac), an abusive pimp in the brothel world/a scheming orderly in reality, confronts Baby Doll and tells her that he feels like a kid in a sandbox where everyone gets to play with his “toys” and now he’s taking his toys home.  Nice, another way to objectify your female characters.  Snyder may possess good intentions, but we all know how those turn out… Even in a cut sex scene, Snyder claims that he’s showcasing empowering as it conveys a woman owning her own sexuality.  The cut scene showed Jon Hamm as the “High Roller” who’s bought Baby Doll, telling her that if she comes to him and has sex with him willingly, he’ll set her free.  Uh, yeah.  Sex under bribery isn’t exactly owning your sexuality.

One scene near the beginning of the film gave me hope that this wouldn’t be a misogynistic piece of bullshit.  In a fluid switch from “reality” to the dream world of the burlesque brothel, Cornish stops a rehearsal of a show for male clients in which they are pretending she’s a patient about to be lobotomized (mimicking Baby Doll’s impending fate in reality).  Cornish as Sweet Pea says,

“This is a joke, right? I get the sexy school girl and nurse thing, but what’s this? A lobotomized vegetable? How about something more commercial?”

Snyder also claims that he didn’t shoot the women provocatively.  Excuse me for a minute while I choke from laughing so hard…okay, I’m back. Wait, he actually thinks that doing things like zooming in near a woman’s crotch or having a woman lasciviously lick a lollipop isn’t provocative filming?!  Dude, let’s call a spade a spade here.  At first I thought that if perhaps the film had been written or directed by a woman, someone could have pointed out all of the sexist bullshit Snyder was infusing into the film.  But his wife was a co-producer…so there goes that theory!

A prevalent myth exists that featuring kick-ass women in action films proves empowerment. But that’s not the reality.  Researcher Katy Gilpatric, Department of Social Sciences at Kaplan University (“Violent Female Action Characters in Contemporary American Cinema”) found that most women in action films serve as props to the male characters, die via self-sacrifice and reinforce gender roles.  While the women in Sucker Punch don’t serve as love interests and work cooperatively as a team, SPOILER ALERT!!! most of them die (in the fantasy world) and sacrifice themselves.  Worst of all, they all succumb to stereotypical gender roles.

Sure, Snyder can claim he’s created a critique on geek culture, rather than lavishly embracing it.  I can claim I’m the Queen of England.  But when you have a pile of shit, throwing a gown on it and parading it around…it’s still a pile of shit.  Maybe I wouldn’t be quite so hard on this film if more films featured strong, powerful women in which they tell their own stories.  Maybe if women didn’t confront constant subjugation and violence amidst a rape culture.  Maybe if society didn’t base a woman’s worth on her thinness and beauty; that women must embody both whore and Madonna.  Maybe…oh who the hell am I kidding.  Ultimately, Sucker Punch breathes misogynistic pornification, where women put on shows for men and serve as nothing more than mere sex objects.  I’m not sure what’s worse, Snyder’s faux feminism or no feminism at all.

7 thoughts on “Valley of the Dolls: The Faux Feminism of ‘Sucker Punch’ Turns Women into Fighting Fuck Toys”