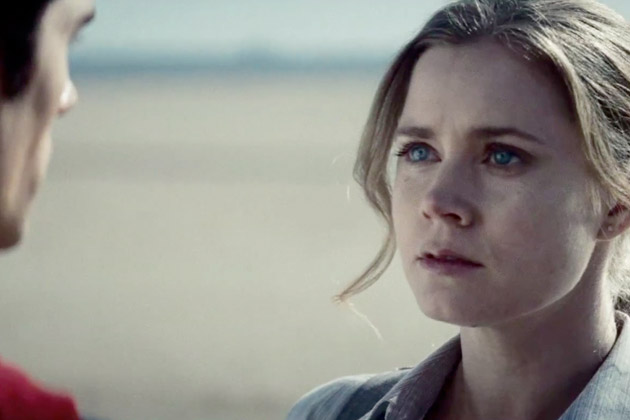 I’ve never been a huge fan of Superman. Sure I grew up watching and liking the Christopher Reeve films. And I sure as fuck am NOT a fan of Zack Snyder and his frequent faux female empowerment, despite his protestations to the contrary. But I do adore Lois Lane. An intrepid, fast-talking, driven reporter? How could I not?

Lois has had many incarnations: feminist women’s libber, lovelorn damsel in distress, tough business woman. And she’s often a mélange of these traits. She has an extensive feminist history and “she has always reflected conflicting attitudes toward women, especially talented, independent women.” Throughout her history, it seems Lois has always been a crystallization of a woman immersed in a world dominated by patriarchy and sexism. So does Man of Steel give us “a Lois Lane we deserve?”

Lois is a smart, spunky, hard-hitting, Pulitzer Prize-winning journalist. In her first scene in Man of Steel, when there’s some bro-tastic bullshit being spewed, Lois replies, “Now that we’re done having a dick measuring contest.” Fuck yeah!! Love this Lois! When Lois is shown her Spartan quarters at a military outpost in the Arctic, she questions, “Where do I tinkle?” Did Lois really use the word “tinkle?” Since it was juxtaposed after her awesome “dick-measuring” throwdown, I believe it’s intended as a subtle commentary on how society views women as weak, coddled and needing lots of amenities. But who knows, maybe I’m giving the film too much credit.

Lois writes a story about the mysterious stranger who saves her in the Arctic, believing he is not of this world. When her editor Perry White (Laurence Fishburne, the first African-American to play the role…and sadly one of the few people of color in the film, which is a shame considering “Superman’s identity as a transnational adoptee”), won’t publish her story, she persists and leaks it to an online site. Lois refuses to let anyone get in the way of her career. And that’s incredibly admirable.

In the Superman films with Margot Kidder and Christopher Reeve, Lois is a better reporter than Clark. He can type faster but she’s a shrewd investigative journalist. He has the brawn while she has the brains. But both share a morality, he wants to save people in danger, she wants to tell stories to inform the public and expose injustice. Because of this, both are fairly equal despite Superman’s superhero, god-like powers. There’s an interesting change in Lois’ role in Man of Steel. In the comics and previous films, Lois suspects but doesn’t know Clark is Superman, or if she does know, Clark erases her memory of his true identity. But here she discovers the truth early on. It puts the two characters and more equal ground.

Producer Deborah Snyder says Lois and Superman in Man of Steel save each other – he saves her physically while she saves him emotionally. Does that sate my need for equality? Notsomuch. Yes, it’s a step in the right direction. Yet it makes me uneasy as it relegates men and women to stereotypical gender roles. That men handle the “tough stuff,” while women the touchy-feely world of emotions.

I like that Lois makes up her mind and has an insatiable curiosity and is career-driven. Yet her life still revolves around Superman. Now some people will argue with me saying, “But the movie is named Superman, NOT Lois Lane!” Yeah, I know. I don’t give a shit. I want women in films to have their own personalities, their own lives, their own identities. Of course Lois’ path is intertwined with Superman’s or she wouldn’t even be in this film. But why must women continuously be reduced to damsels in distress, sidekicks or love interests? Wielding a gun or throwing a punch, isn’t automatically synonymous with power or agency.

Some will argue that Lois fights, playing a pivotal role in defeating General Zod. And she does. But it’s not her ingenuity or skills that enable her achievements. It’s Superman’s daddy via fancy hologram-consciousness instructing her how to defeat Superman’s enemies. Okay, so she can carry out orders. Is that really an improvement? It’s not her ingenuity or intelligence. And of course Lois still remains the love interest and frequent damsel in distress.

What about Faora, Superman’s female Kryptonian, man-hating (in the comics) nemesis? She kicks some serious ass with a compelling fighting style. And it’s awesome. But again, she merely follows Zod, a dude, serving as his second in command. Why couldn’t she be in charge as the head villain? While she doesn’t have much personality, she does have an interesting exchange with Superman when she tells him he will always lose because he suffers the flaw of morality which she and her brethren have evolved past.

I initially thought this would be an annoyingly bro-tastic film with guidance and support strictly coming from the men in Clark/Kal-El’s life. But women play an equal role in the film. Unlike Star Trek Into Darkness where women remain mostly invisible or as sex objects, we see women in the military, women journalists besides Lois, and women on Krypton in leadership positions. “All of this may seem relatively minor, but it is rare for superhero movies to feature females in important, non-sexualized, non-damsel-in-distress role.”

What is interesting though is Man of Steel’s commentary on masculinity. Throughout the film, Clark/Kal-El must wrangle with his emotions of identity and belonging. He wants to help people but his father keeps telling him he must hide his powers for people fear what they don’t understand, further underscoring the themes of immigration and xenophobia. When Clark is a young boy, he gets bullied. But he doesn’t fight back, he merely endures. He tells his father he wanted to hit the boy. His father nods and says that part of him wanted him to hit the bully. His father inquires, “But what would that accomplish?” When Clark is much older, traveling around and bouncing from job to job in anonymity, he again encounters a bully objectifying a female co-worker. He endures the bully’s taunts and walks away. There’s a continually dueling masculinity happening on-screen — a mature, calm and rational male who turns the other cheek and a toxic, aggressive, hyper-masculine male vying for supremacy.

Both sets of parents — Jor-El and Lara Lor-Van and Jonathan and Martha Kent — influence their son. Man of Steel shows how Clark/Kal-El benefits from the influence of both his adoptive and biological father and mother. Although it would have been nice to see Lara’s consciousness in the Fortress of Solitude, not just Jor-El. Through much of the film, it’s Jor-El and Jonathon Kent providing guidance. But Martha Kent provides as strong an impact on Clark. She teaches her son to silence all of the chaos in his mind (brought on by his superpower senses of hearing, sight and smell), to focus only on the sound of her voice. In a genre that often features “absent mothers,” it’s great to see the power of motherhood here.

By showcasing the strength of his bonds with his father and mother, the film asserts that men need both feminine and masculine spheres in their lives. Superman finds inner peace when he learns of his past and when Lois believes in him. The men in Clark/Kal-El’s life teach him outer strength while the women in his life teach him inner strength.

The message underscoring the film is choice. That we can choose our destiny, choose the lives we lead. I found this especially compelling considering 2013 is shaping up to be the worst year for reproductive rights and the film’s subtle reproductive justice theme as Jor-El and Lara defy the laws of Krypton to conceive Kal-El/Clark. They choose to defy the eugenics of their society and have a child who can choose his own path, not merely follow the one laid out for him by society. They also choose to jettison their child to Earth in order to save his life. While we get to see Jor-El in all kinds of action scenes, Lara is the one who chooses to push the button launching Kal-El when her husband is threatened. By the end of Man of Steel, Superman must make a choice. He must choose Krypton or Earth. And he ultimately decides through a surprising violent act that runs counter to Superman’s moral code. When he breaks down because of his decision, Lois is there to comfort him.

While I liked it and it’s by far my favorite Snyder film (although trust and believe, that’s not saying much), it’s kind of a mess with tissue-thin characters and not being able to decide what it wanted to be. While it’s “criticial of hyper-masculinity and the violence it engenders” and “condemns sexual objectification and harassment of women,” the film’s last third contained such an onslaught of non-stop violent action it seems to contradict the theme of the perils of violence and aggression. Yet it’s nice to see a film argue that “choice saves the world.”

While it’s fantastic Man of Steel reinforces the importance of both femininity and masculinity and attempts to deconstruct hyper-masculinity, it’s unfortunate that the film still says women’s lives revolve around men through its failure of the Bechdel Test. Yeah, I don’t really count one-sided conversations of journalist Jenny saying to Lois, “Come see this,” or Faora instructing Lois about her breathing device. What’s annoying is that these conversations could have been fleshed out, along with the discussion between Martha Kent and Lois who talk to one another…but of course about Superman.

Some have hailed Man of Steel “the most feminist action film of the year.” Yes, it depicts women in various roles, boasts an intelligent female love interest and a kickass female villain, and questions toxic hyper-masculinity. Despite all its strides, can a film truly be feminist if it ultimately revolves around dudes?

I’m getting really fucking sick and tired of complaining about blockbuster films, particularly superhero films. I love this genre. I love comic books, sci-fi and action films. I want so desperately to have these films be awesome. And feminist. Which would make them even more awesome.

While we’re seeing more women-centric blockbusters like The Hunger Games, Bridesmaids, Twilight and the upcoming The Heat, we desperately need more, especially women in superhero movies (Wonder Woman, She-Hulk, Black Widow, etc, etc, etc). Hollywood has “pretty much entirely devoted itself to telling men’s stories.” It seems like filmmakers are kinda sorta beginning to listen to audiences’ desire for more empowered women on-screen. Yet I’m continuously annoyed that even when filmmakers claim their female roles will be more proactive or empowered, their attempts at appeasement still fail. They still don’t get it.

Some filmmakers and studios think merely increasing the number of women, featuring a female sidekick, or giving a woman a gun solves everything. How about seem real empowerment? How about seeing complex female characters with agency? How about we see their perspective, hear their voice and see their struggles?

Man of Steel gets so many things right. Yet it still fails to portray nuanced female characters with agendas of their own who don’t exist to aid in the self-actualization of the men in their lives — roles Lois, Martha, Lara and Faora all serve. It’s a shame especially when you have an iconic feminist female role already embedded in the story.