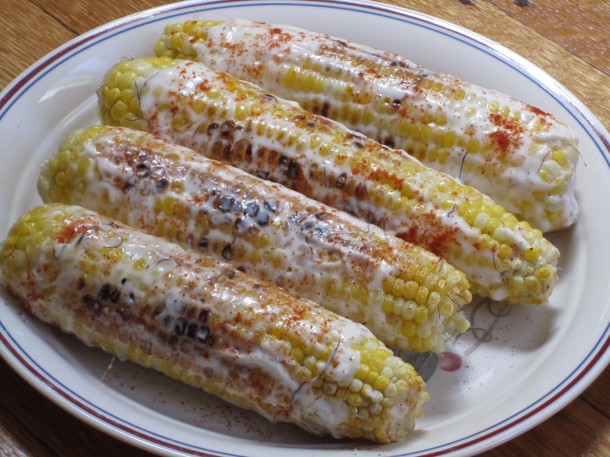 As I peered in my kitchen this weekend, trying to stave off hunger pangs, I wondered what to eat.  A hot and lazy summer day, I yearned for something fast and quick but of course delicious.  Since it’s the summer and I buy a lot of seasonal produce, several ears of corn peaked out at me from my fridge.  Perfect!  But I craved something different from the usual boil, butter and salt routine.

For me, corn conjures up images of Latin cuisine.  So I cracked open my trusty Viva Vegan cookbook.  Written by one of my vegan food icons, Terry Hope Romero, I found her recipe for Mexican Street Corn, which I adapted, changing the oil from peanut to sesame, omitting the oregano and using cayenne pepper instead of chili powder.  Served by street vendors, it traditionally uses Mexican crema, a mixture of sour cream, heavy cream and salt. As vegan mayonnaise, particularly Vegenaise (which is seriously AMAZING), has a subtle tang, the taste equivocates Mexican crema better than dairy-laden mayo.

As I told you last week, apartment living with no balcony or back yard means no outdoor grilling for me.  So broiler or pan-grilling it is!  Grilling makes the kernels so tender and brings out a wonderfully smoky, sweet flavor in the corn.  Fused with the comforting, creamy tang of the mayo, nuttiness of the sesame oil, acidity of the lime juice and heat of the cayenne, each balanced bite will whisk you away to the streets of Mexico…and remind you that sometimes the simplest recipes are indeed the best.

3. In a small bowl, combine mayo and juice from 1/2 of 1 lime.  Whisk together to make it creamier so it will be easier to spread.