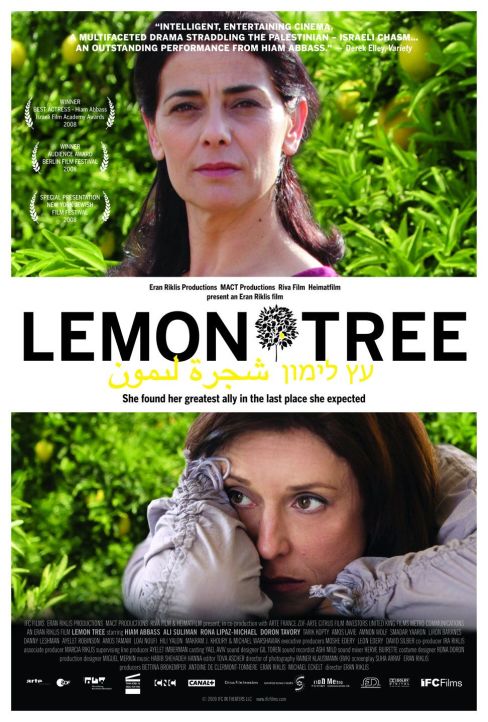 Arab culture has always captivated me.  In college, I took classes on gender and Islam, Arab women’s movements and Middle Eastern History; classes which opened my eyes to diverse cultures and perspectives.  People possess passionate opinions about the ongoing conflict between Palestine and Israel.  With so much chaos and oppression, observers as well as those personally involved may not truly comprehend the other side’s plight.

The film Etz Limon (Lemon Tree) attempts to bridge the divide and present both sides of the story.

Starring the always powerful Hiam Abass (The Visitor, Amreeka), who effortlessly exudes dignity and grace no matter the role.  She captivates the audience, fully expressing her thoughts and feelings with her eyes, never having to utter a word.  Abass won several awards, including Best Actress Award of the Israeli Film Academy, for her portrayal of Salma Zidane, a Palestinian widow who tends a lemon grove that’s been in her family for generations.

When the new Israeli Defense Minister moves in next door to her (on the Israeli side of the border) with his wife, Mira Navon (Rona Lipaz-Michael), the Secret Service advises him that the lemon trees are a security risk.  Fearing a sniper could be obscured by the trees, the Minister orders Salma to cut them down.

A woman who’s lost her husband, who’s children have grown and moved away, Salma is not about to lose her source of income nor her identity.  With quiet yet fierce determination, she enlists the help of a young lawyer to fight the court order.  Her decision to go against the State of Israel sends ripples throughout the lives of those involved.

Simultaneously, Mira faces her own struggle as she attempts to adapt to life in her new home and role as a politician’s wife. She’s often in solitude as her husband is preoccupied with his career. She ultimately becoming an unlikely ally in Salma’s crusade. As the court case gains more notoriety, Mira gives interviews speaking in favor of Salma, defying her husband, much to his chagrin. 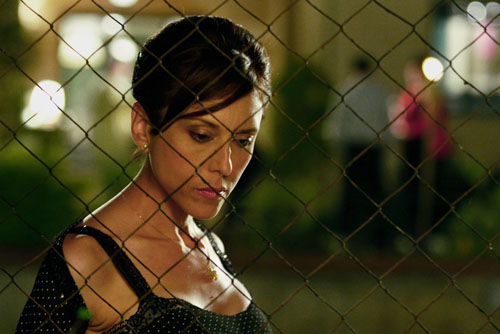 Directed by Eran Riklas (The Syrian Bride), this beautiful and understated film simultaneously conveys the daily oppression of the Palestinians as well as the fears of the Israelis.  Discussing the film, Riklas said,

“The Middle East is constantly changing although when you really think about it, perhaps it isn’t…hope, optimism, pessimism, breakthroughs, new horizons, a new day, the future, the past – all words used on a regular basis to describe the situation in a region that has seen it all.  Trees have always been around to witness what mankind has been doing…this is really a film about solitude as it is reflected in the lives of the two women – Salma on the Palestinian side and Mira, the Defense Minister’s wife, on the Israeli one…as well as all the other characters involved who somehow represent so many issues and subjects but all of them suffer from a kind of loneliness which is part of their lives on a personal and national level.”

I was pleasantly surprised at its balanced treatment of both perspectives, considering the volatile and intertwined history of religion and bloodshed.  No stereotypes exist here. No judgments passed on who’s right and who’s wrong.

While not originally intended as a feminist film, Lemon Tree ultimately is as we see the world through each woman’s eyes — we see their battles, their journeys. Too often, there’s a fallacious stereotype that exists in the U.S. that women in the Middle East are passive or subservient. Not true. In the film, both Salma and Mira find their voice and fight for what they believe.

Salma and Mira are both neighbors and mothers.  Two separate scenes in the film show each woman climbing over the wire fence to the other’s border, perhaps symbolizing their ensuing empathy for each other.  Separated by language and the physical wall between Palestine and Israel, yet united in their bond of compassion and respect for each other.  Each woman contends with loneliness as they find their inner strength, striving to navigate their lives in the constraints of their imposed physical and emotional boundaries. Each woman struggles to literally and metaphorically tear down confining walls with the hope of achieving freedom and peace.