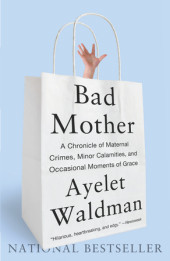 Interview written by Sarah Hudson.  Originally published at My Ideas Is Just Better.  Reprinted with permission.

As my last post discussed the supposed battle between single women and mothers, from my own perspective as a single lady, I thought I would provide the opposite view…that of a mom.  My fellow blogger Sarah Hudson (My Ideas is Just Better) recently interviewed author Ayelet Waldman (Bad Mother, Love and Other Impossible Pursuits) about her books and motherhood.  Waldman opened up and shared her thoughts on everything from what it takes to be a good mother and having your book made into a movie to blogging and comments from assholes.

Just as single women face biases, so do mothers.  Waldman talks about how the media silences women’s voices and how easily society deems women “bad” mothers.

Here’s a snippet of the insightful interview:

Sarah Hudson: Looking at your book, in the opening essay in Bad Mother, you say that there’s “a vogue for honesty” in motherhood and while that’s not new, do you feel like with the response you received and the way some of the “mommy bloggers” have started to back away from that persona, do you still feel there’s that vogue for honesty?

Ayelet Waldman: When my essay came out there was that huge, huge cry. But when Bad Mother came out, except for the few psychos and the fact that the Salon comments page is the cesspool for the American psyche so you can’t draw conclusions from that because those people are so fucking insane, the response was overwhelmingly positive and I think that’s because there has been a transition in the way we think about motherhood over those 5 years. And I like to think that I’ve been part of that transition. It used to be that you showed up for the bake sale with your bakery cupcakes and you were embarrassed. Now, I feel that when you show up for the bake sale with your lovingly handcrafted cupcakes, you’re a little embarrassed. And this is all for the good. There’s just more room for expression. The book is all part of the same debate. Now I embrace the bad mother, I’m still talking and using the rhetoric of women’s oppression. But at the same time, to get to choose? It’s better to be this way than the other way. It’s better for the kids too. These children raised by perfect mothers, who have channeled all their ambition and neuroses and anxiety into the perfection of their children, are not the people we want running our society in two, three, four decades. Trust me.

Hudson: I think that’s a huge part of why what you write can be so controversial. Because you’re writing about what my grandmother would refer to as high class problems…But that doesn’t negate how real they are.

Waldman: It also doesn’t negate that it’s social commentary. Like child care issues. People like to say that it’s a high class problem but, trust me, the woman who’s desperately trying to make her rent just has a much more serious version of that problem. So, like writing about the dilemmas of child care, like “what does it feel like to have your kid in child care,” women who write that get lambasted but that’s a problem that all women have across the economic spectrum, even more so for people who are less privileged. And nobody says to Michael Lewis, “Shut the fuck up you’re a white man.” You don’t hear that. Nobody says that to my husband. But you hear it to women and the reason you hear it is because it’s all about silencing the voices of educated women because that is the best way to silence the voices of all women…

Hudson: In Manhood for Amateurs, there’s the story of your husband being told that he’s a good father by a total stranger in a grocery store. So my final question is, what do you think it would take for a stranger to tell you that you’re a good mother?

Waldman: Oh I know exactly what it would take. I’ve figured it out. I would have to perform a tracheotomy on one child with a Bic pen, while helping the other child with their algebra homework and changing the baby. If I did all of those simultaneously in public, someone might say good job. Short of that, there’s nothing.

Visit My Ideas is Just Better to read the rest of Sarah’s wonderful conversation with “the Divine Ms. W.”

Sarah Hudson is an Ohio-born, Florida-bred girl, currently residing in Boston, whose life revolves around politics and pop culture. She keeps meaning to read Michael Pollan’s The Omnivore’s Dilemma but the new issue of US Weekly is just too tempting.

2 thoughts on “Guest Post: Interview with Author of ‘Bad Mother’”