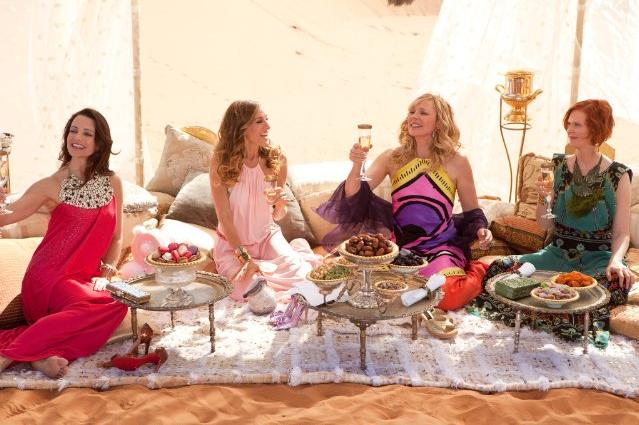 Sex and the City is one of my all-time fave shows.  I simply adore it.  As a result of watching it over and over, I can and do quote lines from each episode.  I’ve even been on the SATC tour in NYC (which I highly recommend!).  While I was thrilled to see the first movie on the big screen, and enjoyed it, it essentially broke my heart.  Despite the show dealing with infidelity, cancer and getting dumped on a Post-It, the first film took the ladies to a much darker and gut-wrenching place than they had ever ventured.  The second movie jubilantly returns them to a place of sheer escapist delight.

The second movie picks up 2 years where the first film left off.  Charlotte (Kristen Davis) is juggling being a mom to two girls, Miranda (Cynthia Nixon) is struggling with a new domineering boss at work, Samantha (Kim Cattrall) is Samantha and attempting to stave off menopause and Carrie (Sarah Jessica Parker), the narrator and heart of the show, is married to the love of her life.  Writer/director Michael Patrick King takes the fabulous foursome to Abu Dhabi on a lush vacation.  SATC2 delightfully dances into outrageous over the top territory, including Liza Minnelli officiating a gay wedding before belting out Beyonce’s “Single Ladies.” The ladies strut in the desert over sand dunes in cowboy hats and couture as if walking down a runway and sing “I Am Woman” in a karaoke bar.  It’s silly and fun. That’s not to say that all is smooth sailing with Bradshaw & Co.  Marriage vows are questioned, some have problems letting go and lost loves return.  But these issues take a backseat to the joyous romp.

Too many people have bashed, criticized and lamented the frivolous nature of SATC2.  It’s been labeled “the most stupid, the most racist, the most polluting and women-hating film of the year…”  Roger Ebert declared that “some of these people make my skin crawl” and Lisa Schwarzbaum of Entertainment Weekly lamented, “When did “Sex and the City” become so long and mean so little?”

In response to all the hate, Melissa Silverstein of Women & Hollywood writes,

“I actually think that people really get off on beating up on this film, and I can’t decide whether it’s because a gay man has made a pretty gay film that is for women, or because the film is for and about women that’s going to make a ton of money and no one gives a shit if a single straight guy goes and sees it…But while it is an escapist movie, it is one that occasionally has some zingers about how women are treated in our culture.”

Despite its rank of 2nd on opening weekend (Shrek Forever After was #1) and 3rd for Memorial Day weekend as a whole, the SATC franchise is still a money-making juggernaut.  When blockbusters like Iron Man 2 or Transformers are applauded (and yes they are silly fun), a “women’s” film is seen as frivolous and trite.

While this is by no means All About Eve or Citizen Kane, the film raises important issues.  What does it mean in our society to be a married couple without children?  Carrie questions how to navigate traditions such as marriage while still being true to yourself.  Women being silenced (by men, the media and society) is another reoccurring theme in the film.  Charlotte and Miranda share one of my favorite scenes where they sip martinis and divulge secret concerns about motherhood.  Some critics have mistakenly thought the women were toasting themselves and their lavish, selfish lifestyle.  Yet they were expressing their concerns as mothers about living up to perfection and not being able to voice their valid fears.  Plus they give an adorable shout-out to women who don’t have the expensive childcare assistance that they can afford.

Some have raised the question as to whether the movie was offensive to Arabs and Muslims.  Dubai wouldn’t even allow them to film there due to the sexy storyline.  I have to say that this is my one criticism of the movie.  There’s a Eurocentric tone to much of the movie, including a scene in which Samantha says that for such a future thinking country, the United Arab Emirates are backwards about sex.  Just because a different culture has a different perspective on sex, does not mean they are wrong or “backwards.” But the most cringe-inducing moment happens when Samantha, whom I love for proudly owning her sexuality, shouts profanities and shoves condoms in the faces of Muslim men on the way to mosque in a souq (marketplace).  The majority of the audience roared with laughter but I was disappointed.  I wish they had taken the opportunity to dispel stereotypes rather than going for an offensive cheap laugh.

However, the movie redeems itself with a touching scene between the four ladies and several Muslim women, who reveal flashy couture gowns underneath their aabayas (robes) and niqabs (veils).  Some critics have erroneously criticized this moment as showcasing consumerism.  However, I found it as a way for the women to show that they were different yet shared unity in self-expression.  And according to my Palestinian Muslim co-worker, this is precisely how women in the Middle East dress as they dress for other women, not men.  A point that movie critic Roger Ebert clearly doesn’t understand as he ponders, “Do women wear their lowest-cut frocks for each other?”  The answer is a resounding…yes!  And therein seems to be the biggest problem of all that people have with SATC2: it’s a movie for women (and gay men) and not aimed at straight men.

Regarding the difference between fantasy films for women and men, Scott Mendelson, film critic and blogger, astutely points out,

“If the male fantasy is about selflessness, sacrifice, and responsibility, the female fantasy is about just the opposite. Fair or not, the expectations of society dictate that women sacrifice on a daily basis, for their kids, for their (allegedly unappreciative) husbands, even for their aging parents. They are the caregivers and selflessness is both their calling and their burden…Thus, for the female fantasy film, the escape is one of escaping responsibility, of being selfish, of having unlimited funds and unlimited time to make yourself look better and feel better. If the women of Sex And The City are a little shallow (as are some of the romantic heroines played by Reese Witherspoon and Jennifer Aniston), then that is only because that is the fantasy of many women: to throw caution to the wind, to be selfish and wealthy, to use your wealth only to better yourself and not worry about others.”

But despite the missteps, the movie is a fun and campy ride, a hilarious and heartwarming fantasy.  It made me feel good, reminding me why I love the show so much.  Many women love the show for its gorgeous fashions and NYC backdrop.  While the eye candy is certainly icing on the cake, that’s never been my reason.  To me, the show has always been about friendship.  Carrie, Charlotte, Miranda and Samantha were, and still are, a family.  It was a groundbreaking show about being a 30-something woman in society.  It was a show that said it’s okay if you want to be single and it’s okay if you want to get married and have children; a perpetual love letter to love, friends and to embracing individual choices.

So if you’re a fan of the show, put your Manolos on, sip martinis and grab your best girlfriends (which I did…well except for the Manolo part as I wore vegan shoes!) and spend the evening reminiscing with some dear old friends.