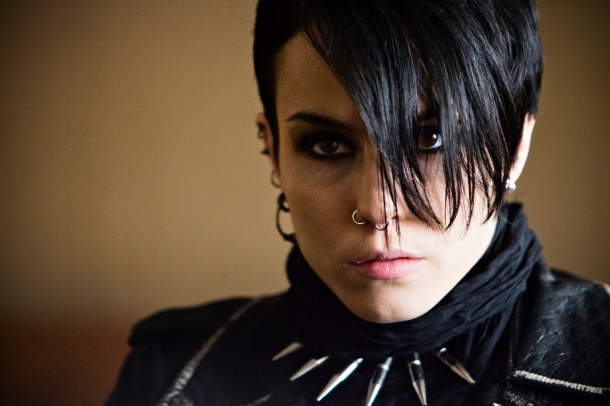 Unless you’ve been living under a rock for the past year, you’ve undoubtedly heard about the international phenomenon that is Swedish author Stieg Larsson’s The Girl with the Dragon Tattoo.  As I often lament the lack of strong female characters in books and film, I was intrigued to descend into the world where one of the most exciting and controversial heroines resides.   I’ve been voraciously reading the books in the Millennium Trilogy (I’m currently reading the 2nd).  Having thoroughly enjoyed the book, I was curious how the film adaptation of The Girl with the Dragon Tattoo, directed by Swedish filmmaker Niels Arden Oplev, would measure up.

The story revolves around the disappearance of Harriet Vanger, the niece of a wealthy business tycoon, who vanished without a trace 40 years earlier.  Harriet’s uncle has been tortured by her absence all these years.  Journalist Mikael Blomkvist, who’s been convicted of libel, and Lisbeth Salander, an introverted punk who’s a brilliant researcher and hacker, seek to solve the baffling mystery.  The book is a riveting twisting thriller with numerous suspects.

Blomkvist is an interesting character.  A charming and passionate journalist championing for the truth, he vacillates between cynicism and naïveté.  Dejected after his conviction, he yearns to clear his name.  He also frequently bed hops yet has enormous respect for women often befriending them.  While acclaimed Swedish actor Michael Nyqvist gives a valiant effort, he does not imbue the character with enough charisma.

But the sole reason to go see the movie (and read the book too) is for Lisbeth Salander.  Noomi Rapace, who won a Guldbagge Award (the Swedish Oscars) for her portrayal, plays her perfectly.  She stepped into the role by training for 7 months through Thai boxing and kickboxing (in the books Lisbeth boxes too) as well as piercing her eyebrow and nose, emulating Lisbeth’s punk look.  A nuanced performance, Rapace plays the tattooed warrior with the right blend of sullen introvert, keen intellect and fierce survivor instincts.  Salander is a ferocious feminist, crusading for women’s empowerment.  Facing a tortured and troubled past, Salander is resourceful and resilient, avenging injustices following her own moral compass.  An adept actor, Rapace conveys emotions through her eyes, never needing to utter a word.  Yet she can also invoke Salander’s visceral rage when warranted. 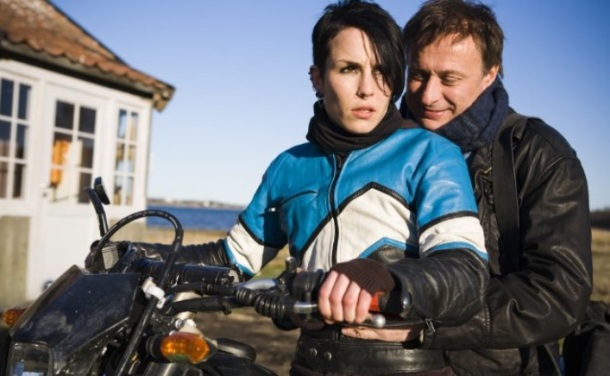 While not quite living up to the book, the film is fantastic.  It’s a very stripped down, gritty portrayal, particularly when compared to slick stylized American movies (which is I’m sure how it will be produced in the American re-make).  Seeing all of the Swedish locales described in the book on-screen plunged me even further into the story.  While the film stays fairly faithful to the book regarding the plot and the protagonists Blomkvist and Salander, there are notable differences between the book and film.  As the movie condenses the book (even as it clocks in at 2 hours and 32 minutes), it lacks the same suspense.  However Oplev does a superior job streamlining the story’s flow and evoking the tense mood.

But there are a few missteps.  The score is distracting at times (the 80s called and they want their synthesizer back) and the end following the murder mystery portion, feels rushed and thrown together.  The biggest complaint from viewers has been that the film lacks character development.  Female characters, such as Erika Berger, Millennium’s editor and Blomkvist’s best friend/lover, and Cecilia Vanger, a suspect in Harriet’s disappearance, have their roles drastically reduced; interesting for a story that focuses so prominently on women.  Yet Oplev diminishes other characters in order to put the two sleuths front and center.

Also, if you’re like me and reading each book before you see the film and you haven’t read the second book yet, be prepared for spoilers as there are scenes NOT in the first book that are taken from the second book integrated into the film, such as Lisbeth’s flashbacks and the topic of her conversation with her mother. 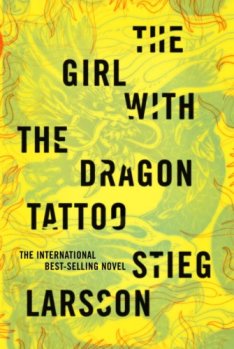 In the book, Larsson makes social commentaries on fiscal corporate corruption, ethics in journalism and the role of upbringing on criminal behavior.  Larsson also provides an interesting commentary on gender roles with his two protagonists.  Despite Blomkvist’s social nature and Salander’s private behavior, they both stubbornly follow their own moral code.  Both also possess overt sexualities. Yet society views Blomkvist as socially acceptable and perceives Salander as an outcast.  These themes are absent from the movie adaptation.

The Girl with the Dragon Tattoo has received an exorbitant amount of attention for Larsson’s controversial central theme of violence against women.  It’s true that both the book and film portray graphic violence.  The movie does not shy away from the uncomfortable subject matter.  In the book, women fall prey to being assaulted, murdered and violently raped.  A pivotal rape scene, disturbs and haunts the viewer.  But sexual assault is a reality women face, albeit an ugly truth that we as a society may not want to see.  Yet Larsson in the book and Oplev in the film never made me feel as if women were victimized.  On the contrary, women, particularly in the form of Salander, are powerful survivors.  She fights back, not merely accepting her circumstances.

As Melissa Silverstein of Women & Hollywood wrote in Forbes,

“As my friend playwright Theresa Rebeck says, “The world looks at women who fight back as crazy.” We constantly see movies, TV shows and plays where men commit violence against women. That’s our norm. Here we have a woman who is saying no more and exacts revenge. Larsson is very clearly saying what we all know and believe. Lisbeth is not crazy. She is a feminist hero of our time.”

Violence against women is a pervasive issue.  According to the anti-sexual assault orgainization RAINN, “every 2 minutes in the U.S., someone is sexually assaulted; nearly half of these victims are under the age of 18, and 80 percent are under 30.”  And in Sweden, the problem is just as pervasive.  Larsson states that, “46 percent of the women in Sweden have been subjected to violence by a man.”  We must not continue to brush these crimes aside.  The original Swedish title of The Girl with the Dragon Tattoo (both the book and the film) is Män Som Hatar Kvinnor, which translates to “Men Who Hate Women.”  I’m glad that Larsson devoted his books to shedding light on misogyny in society.

A provocative and haunting film, The Girl with the Dragon Tattoo is worth watching for Rapace’s subtle yet powerful performance.  It’s rare for an audience to see a strong, self-sufficient woman on-screen.  It’s even more unusual for a movie to address the stigma of sexual assault as well as the complexity of gender roles.  Watch the movie and read the book.  Get acquainted with Lisbeth Salander; she may be the most exhilarating, unconventional and surprising character you will ever encounter.

10 thoughts on “Rebel with a Cause: A Feminist Hero Emerges in Film ‘The Girl with the Dragon Tattoo’”