I’ve been looking forward to watching Eat, Pray, Love ever since I saw the trailer. I read the book a couple years ago as its popularity piqued my curiosity.  The prospect of leaving life behind to travel for a year intrigued the armchair traveler in me.  I picked the book up…and couldn’t put it down.  Author Elizabeth Gilbert drew me in with her honesty, humor and raw vulnerability.  So I was eager to see the film adaptation.

The film follows Elizabeth “Liz” Gilbert, a successful writer with a seemingly perfect husband and home.  Yet as she attains more and more of what she thinks she wants, Liz’s unhappiness grows and her world begins to crumble.  Liz endures a devastating divorce followed by a fling with an actor.  When that relationship falls apart, her pain consumes her and she’s unsure where to turn.  Yearning to reignite her passion for life, Liz decides to travel, living abroad for one year.  She chooses to live for four months in Italy to focus on pleasure (“eat”), then India to connect with her spirituality (“pray”) and finally Bali to learn how to balance the two and ultimately lead a life in harmony (“love”).

Lush and gorgeous, the film exhibits breathtaking vistas.  Director Ryan Murphy (Glee, Nip/Tuck) spurs you to want to pick up, leave everything behind and move to Italy, India or Bali too (especially Rome for me!).  And megastar Julia Roberts is likable, capturing Gilbert’s curiosity about the unfolding world around her.  I also enjoyed the decadent food scenes (which are a big part of the book), reminiscent of those in Julie and Julia.  The supporting cast, particularly Viola Davis (Doubt), Mike O’Malley (28 Days, Glee) and especially Richard Jenkins (who shines in The Visitor and Six Feet Under) are gems.  However, Javier Bardem’s talents (he’s phenomenal in The Sea Inside, Vicky Christina Barcelona and No Country for Old Men) as a forceful yet subtle actor are wasted here.

In the book, we have the pleasure of Gilbert’s humorous and vulnerable voice to guide us.  While it’s sort of present in the film, it’s somehow diluted.  One of the most heartbreaking yet touching moments for me in the book is when Gilbert sobs on her bathroom floor begging god for help for she doesn’t know what else to do.  Yet I never felt, as much as she tried, that Roberts captures Gilbert’s depression and how she hit rock bottom.

I’m glad the movie retains the part about Wayan, her daughter Tutti and their struggle to buy a house in Bali after Wayan leaves her abusive marriage.  But in the book, Gilbert spends far more time with them than the movie would lead you to believe, preferring to focus instead on the romance between Liz and Felipe, a Brazilian businessman in Bali.

Gilbert, with the help of friends and teachers along the way, finds the answers she seeks.  Yet she also finds them within herself.  But the film ignores this important distinction.  Especially at the end, it’s as if Liz needs others to tell her what to do, rather than coming to decisions on her own accord.  The book, while ending on a fairy-tale ending, focused on Gilbert’s self-transformation, shifting from always revolving around a man to finding herself and what she wants.  She realizes that you have to truly love yourself before you can love another.  Gilbert learns to forgive herself, lets go of her unhappiness and embraces life.

The movie makes some interesting points on gender.  When Roberts eats dinner with Bardem, he tells her how he stayed at home with his kids while his wife worked.  Roberts calls him “a good feminist husband.”  In Italy, there’s a great scene where they’re celebrating an American Thanksgiving dinner to say goodbye to Gilbert.  Her tutor’s mother asks if she’s married.  When she replies no, the mother declares that she doesn’t understand why a woman would go off and travel by herself.  Her friend Sophie comes to her defense saying that no one would say that to her if she were a man and calls her brave for traveling alone.  Another woman at the dinner comments on the difficulty of women’s choices.

Speaking of gender, last Friday, my amazing boyfriend Jeff accompanied me to see Eat, Pray, Love on opening day.  Best part, I didn’t have to drag or bribe him; he actually wanted to see it.  This illustrates an interesting exception as women will go see films about men as well as films about women.  But many  men (my fab boyfriend excluded) will only go see films starring men, and not women, deeming them frivolous chick films.  Melissa Silverstein at Women and Hollywood (and the Opinioness’ fave blogger!) wrote a fantastic article “If Women Like It, It Must Be Stupid” all about how women’s stories and interests are devalued and treated as less important than men’s interests.  Silverstein writes,

“Why is it that things that appeal to women are made to seem trivial, stupid and less than?  Is it about the fact that large groups of women are embracing something?  Is it a fear that if enough women like something we’ll figure out how screwed we’ve been on so many issues that we will all just come together and revolt?  Pleeze.  Newflash – we aren’t that organized.  Shit, we buy more books and see more films, yet stuff that appeals to women is constantly demeaned.  Aren’t our dollars as green as the guys?  I think the main point of the issue and the biggest problem is still that women go to see movies and read books that star men and men won’t and don’t do the reverse.   This has been going on at the movies for some time and it had created a girl ghetto especially at the big studio movies that are targeted at women.  So in order for the films to be successful they have to be really good (which we hope all movies are but know that many are not), or have built in audiences because only women are going to be in the theatres ala Twilight. The pressure is overwhelming.” 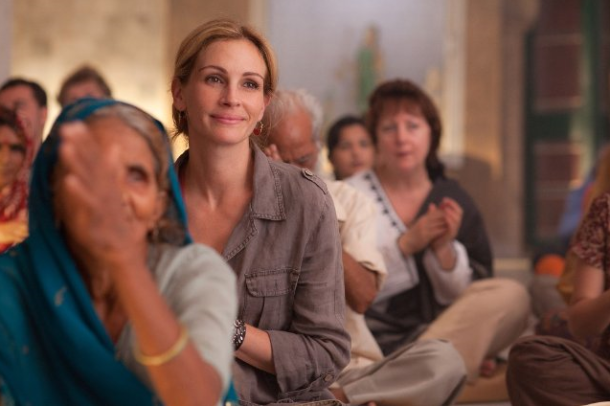 In an article “Eat, Pray Spend” in Bitch Magazine, Joshunda Sanders looks at the gender theme of Eat, Pray, Love in a different light.  She writes about the pervasive problem of privileged literature (“priv-lit”), asserting that women like Gilbert, Oprah and other self-help gurus tell women to buy their way to happiness.  She writes,

“It’s hardly reasonable to demand that every woman who wishes to better her life be poor, or nonwhite, or in some other way representative of diversity in order to be taken seriously. But Eat, Pray, Love and its positioning as an Everywoman’s guide to whole, empowered living embody a literature of privilege and typify the genre’s destructive cacophony of insecurity, spending, and false wellness…Priv-lit perpetuates several negative assumptions about women and their relationship to money and responsibility. The first is that women can or should be willing to spend extravagantly, leave our families, or abandon our jobs in order to fit ill-defined notions of what it is to be “whole.” Another is the infantilizing notion that we need guides—often strangers who don’t know the specifics of our financial, spiritual, or emotional histories—to tell us the best way forward. The most problematic assumption, and the one that ties it most closely to current, mainstream forms of misogyny, is that women are inherently and deeply flawed, in need of consistent improvement throughout their lives, and those who don’t invest in addressing those flaws are ultimately doomed to making themselves, if not others, miserable.”

I found Sanders’ article articulate and fascinating; she raises many valid points on sexism and consumerism.  There’s something to be said for how our capitalist culture continually purports money and possessions as the path to happiness.  But in all her Gilbert bashing, she fails to mention that Gilbert was able to travel in the first place as she was given an advance on a book deal so technically, she was still working.  Regardless of how she funded her trip though, it doesn’t invalidate the lessons she learned.  Ultimately, Sanders misses the point of Eat, Pray, Love.  Gilbert didn’t intentionally write a self-help manual; she shared her individual experiences. Rather, she wrote a manifesto to let go of fear and follow your dreams, whatever they may be.

While not nearly as engaging as the book, I liked the film.  In addition to being eye candy, it raises interesting questions about gender and expectations.  Women are supposed to want marriage and babies.  And yet what we want may differ from societal standards.  Many will bemoan that Gilbert is a wealthy privileged white woman who could afford to take a year out of her life.  But would anyone utter this complaint if she were a man?  Gilbert emphasizes that you don’t need to travel around the world to find happiness.  The film, despite its flaws, reminds us to chart our own course, no matter what anyone tells us.  And that lesson is priceless.

11 thoughts on “Vacation, All I Ever Wanted: Film ‘Eat, Pray, Love’ Shows One Woman’s Journey Around the World To Find Happiness”