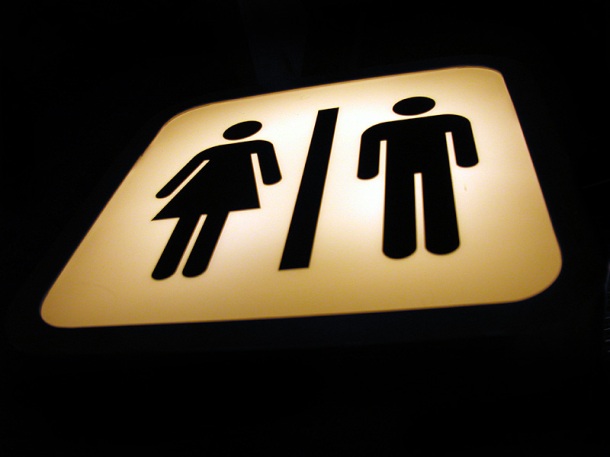 At the bookstore I work at part-time, my co-worker Deb discovered a lecherous pervo skulking about in the women’s bathroom last week.  Apparently, this was not the first time he had done so.  This naturally led to several of us gossiping and ultimately turned into a discussion about gender and bathrooms.  I asserted that I don’t believe in segregated bathrooms.  I’d prefer unisex bathrooms as I don’t like things defined merely by gender.  Deb mentioned that she wouldn’t want to be trapped in a bathroom with a sketchy stalker.  But I countered that having a women’s room doesn’t protect women from assault.  It certainly didn’t stop the jackass who sauntered into the women’s room at the bookstore.  Who’d have thought a discussion over bathrooms would spark a debate?

When it comes to segregated bathrooms, I have a problem with the symbols.  Why does the woman have a skirt?  Not all women wear skirts and not all men wear pants, as demonstrated by a high school classmate of mine who frequently wore his sister’s skirts.  (Sidebar, he was kicked out of school once for his skirt, not because he was wearing a skirt but because the skirt was too short!  At least the school was equal.)  Don’t get me wrong, I love wearing skirts and dresses.  But the signs subtly imply that in order for a woman or girl to be feminine, she must be wearing a dress. I don’t like anything that’s deemed for women only or men only, including bathrooms.

But Deb’s not alone in her fears of mixed bathrooms.  Amnesty International lists sex-segregated bathrooms in schools as one of their suggestions for protecting the safety of young girls.  Avoiding harassment for women is also the impetus in gender segregation in transportation.  In Israel, they will instate some women-only trains, a practice already implemented in Egypt, India, Taiwan, Brazil, Mexico, Indonesia, Belarus, Japan, Dubai and the Philippines.  In India, women face “eve teasing,” which officials hope to avoid with women only train cars. Do gendered bathrooms also protect women from assault?  Perhaps, but other issues arise with gendered bathrooms.

Unisex bathrooms (for both men and women) aren’t a new concept.  On my college campus, and on many other campuses around the country, students and the LGBTQQI community pushed to install unisex bathrooms.  Some corporations have also installed gender neutral (single-stall private) bathrooms.  The 90s TV show Ally McBeal famously explored gender roles and stereotypes as characters shared a unisex bathroom.  Why is it that many of us feel so strongly about gendered bathrooms?  Is it simply a matter of protection?  Or is it viewed as a sacred space a la Sex and the City where women can go to dish about men and swap tampons?  Even men seem to be sensitive about this as I abruptly discovered at a concert.  When the line for the women’s room was too long for my aching bladder, I ducked into the men’s room, not thinking anyone would mind a lady visitor.  But I was sorely mistaken as a few men yelled at me in surprise.  Perhaps people yearn for gendered bathrooms because we are at our most vulnerable and we don’t wish the opposite gender to see us.  Or it might be that some people are comfortable with the separation of traditional gender roles.  Law professor Mary Anne Case told the New York Times,

“Bathrooms have become a cultural ‘fault line’…Very few spaces in our society remain divided by sex.  There’s marriage and there’s toilets, and very little else.”

Now you might be saying shouldn’t people just be able to go pee in peace??  Yes, damn it they should!!  But it’s not so easy for some.  Difficulties may arise when parents with children of the opposite sex need to use the restroom, particularly fathers with daughters as women may feel uncomfortable with a man entering the women’s room.  For people who are transgender or intersex, the decision to choose either the men’s or women’s room may be painful and even dangerous. Trangendered individuals often face harassment as they may not “look” like they’re self-identified gender.  The website safe2pee.org provides a directory, including maps, of unisex and gender neutral bathrooms nationwide as well as resources for transgender or intersex individuals.  As their site states,

“Gender variant people face frequent harassment, discrimination and violence in public restrooms. Something as simple as trying to use a toilet can become a nightmarish ordeal, being forced to show ID, detained or even arrested. Some may not identify within the male / female binary and feel alienated in public bathrooms. This site offers a community-driven resource to allow people to locate safe bathrooms within their communities. Gender neutral and single stall bathrooms can benefit others as well: parents with children, those with access or mobility needs and those who desire extra privacy are a few who may benefit.”

“Many transgender and non-transgender people have no safe places to go to the bathroom – get harassed, beaten, and arrested in BOTH women’s and men’s rooms. Many avoid public bathrooms altogether and develop health problems. This affects not only self-identified transgender people but anyone who is perceived to not fit our society’s strict gender norms.”

Luckily, more gender neutral and unisex bathrooms are being installed in businesses and on college campuses as awareness for transgendered and intersexed individuals grows.  Going a step further, legislation has also been submitted to protect transgendered people, including a transgender rights bill in Massachusetts supported by Governor Deval Patrick and the Employment Non-Discrimination Act (ENDA), a federal bill in Congress that would protect transgendered individuals’ jobs.

There’s a problem regarding our society’s binary gender structure.  Not all people easily identify as male or female.  And even those who do, like myself, feel uneasy about such delineated gender roles.  A basic function like going to the bathroom shouldn’t be a human rights issue.  But it is, while simultaneously increasing the dialogue regarding gender norms.  Hopefully, we can all eventually support a myriad of gender identities and all pee in peace.

10 thoughts on “The Princess and the Pee: Bathrooms and Gender Roles”