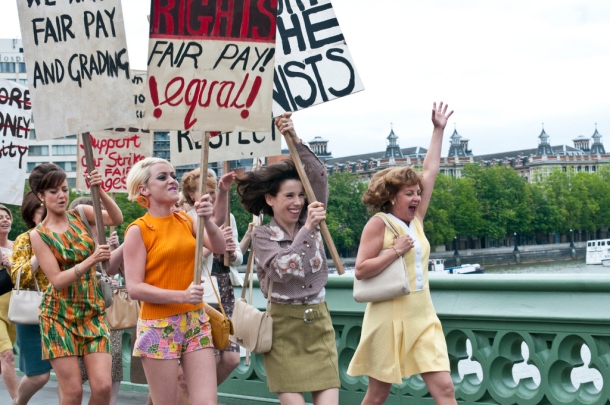 Equal pay for equal jobs…seems like a no-brainer, right?  But of course not all have shared that view throughout history…or even today for that matter.  If you’ve read my previous posts, you know I talk a lot about the importance of equal pay (it’s one of my many mantras) and fair treatment in the workplace.  To me it just makes sense that women should receive the same pay that men do for the same job.  The new fab feminist film Made in Dagenham (which everyone should see!) chronicles women’s fight for equal pay in the UK.

Set in 1968 and based on actual events, the film features Sally Hawkins (Happy Go Lucky) as Rita O’Grady, a machinist at a Ford Motors factory in Dagenham, England.  She and her female co-workers and friends are fed up that they are not paid the same as men and must work overtime after the company deems them “unskilled labor.”  As such, the 187 women decide to go on strike.  But as the story unfolds, we see that much more is going on here as gender roles, sexism and discrimination come to the fore front of the debate.  This rousing film is about how a group of women stood up to injustice and fought for what was right.

While the supporting cast is superb, Hawkins is the soul of the film.  She’s plucky and spunky with tremendous heart, conveying her frustration and anger over the status quo of women’s unjust treatment.  But director Nigel Cole injects a great deal of levity and humor into the story so it never feels heavy-handed. 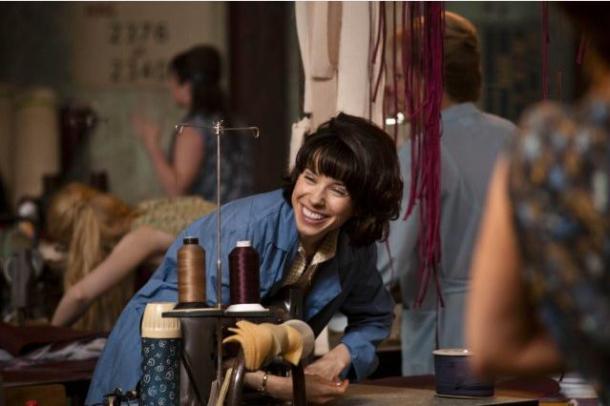 In the beginning of the movie, the women don’t know if they’ll strike.  In a meeting with the union, when a union liaison says he knows what the girls want, Hawkins says,

“Bollux.  You know what the girls want.  How you’re qualified to talk about that I do not know…Women have never been strike before.  You thought you could forget about it and we’d go away.  But we’re not going anywhere.”

So the women go on a 1-day strike.  They hold signs outside reading, “We Want Respect,” “We Want Fair Pay,” “Support the Machinists” and “Support the Women.”

The adorably charming Bob Hoskins (Who Framed Roger Rabbit?, Mermaids), the women’s supporter at the Ford plant, tells Hawkins that it has nothing to do with unskilled labor.  He astutely tells her,

When Hawkins asks him how he came to be so supportive of women, Hoskins replies,

“Got brought up by my mum…It was hard especially when she was getting half what the men got.  There was never any question that it could be any different.  It’s time someone did.”

After receiving a rude letter from Ford in response to the women’s 1-day strike, Hawkins gets fired up.  She rallies the women, standing on a chair Norma Rae style, calling for a permanent strike until they receive equal pay to the men declaring,

“We’re not your men.  No matter what skill they got.  Which is why we have to demand a level playing field whether you have a dick or not…equal pay or nothing.”

In addition to picketing outside their own plant, the women start traveling to other plants in other cities around England.  They talk to other female factory workers, not just machinists, asking them all to go on strike too.  Hawkins tells them,

“Every one of us is entitled to the same pay as men.”

The women then go to London, marching past Parliament with signs including “We Want Sex Equality.”  They get filmed and interviewed, bringing national attention to their cause.  A reporter states,

“What makes this strike unique is that it’s not about a specific pay issue but about all of pay inequity.”

Of course there are numerous opponents to equal pay.  Parliament workers assume that the women will end the strike once the men’s unions put pressure on them to return to work.  A union liaison thinks that “men come first.”  And Richard Schiff (West Wing) claims,

“The industry can’t afford to pay women the same as men.  It will collapse under the weight of the extra wages paid.”

While a historical film, the movie makes interesting commentaries on today’s gender roles in the same vein as Mad Men.  As I’ve written before, it’s interesting how as much as things change, just how much they stay the same.  Throughout the film, the men (and women) condescendingly call the women “girls” while referring to the men as “men.”  The movie also comments on gender in relationships.  Hawkins’ husband was fairly supportive in the beginning of the strike.  But when it goes from a day to weeks and then months, he grows weary.  Hawkins gets into a fight with her husband when he tells her that he doesn’t drink too much or cheat on her or hit her or their kids.  She yells,

There’s also a great scene with Rosamund Pike (a scene stealer in ‘An Education’), her husband who works for the Ford union and Schiff.  Since Schiff heard Pike studied history at Oxford, he asks her if her husband is being too lenient, if he’s “too velvet glove, not enough iron fist.”  This prompts Pike to share her thoughts on unions, how GM rarely has strikes since they employ a collaborative approach whereas at Ford, people tolerate the unions so they have an aggressive and intrusive approach.  Her intelligent response renders the men speechless, stunned that a woman could articulate the problem.

Pike, an unlikely ally, goes to Hawkins (they’ve crossed paths as mothers of children in the same school), pleading,

“Keep going.  Please keep going.  Do you know who I am?  I’m Lisa Burnett and I’m 31 years old.  I have a degree from a prestigious university and my husband treats me like a fool.  And when I was studying, I was happy mostly because of the work…I loved reading about all of these extraordinary people making history.  And I always wondered what it felt like.  So tell me when you’re done…don’t let me down.” 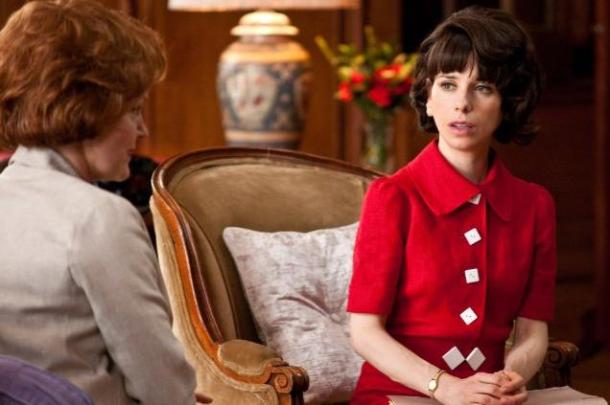 When Secretary of State Barbara Castle, a champion for equal pay in the film and in real life, wants to meet with the women, her aides think it’s a poor idea as it will give the cause merit.  Miranda Richardson (Crying Game, Tom & Viv) gives a hilarious tour-de-force performance as the Secretary.  She screams,

“Credence?  I will give credence to their cause?!  My god!  Their cause already has credence!  It is equal pay.  Equal pay is common justice, and if you two weren’t such a pair of egotistical, chauvinistic, bigoted dunderheads, you would realize that!”

When it’s time for the women to go before the National Union to get the men’s unions to support the female machinists’ strike, Hawkins who’s been their leader, steps up to speak.  One of the douchebag union liaisons who double-crosses the women offers his hand to help her to the stage to which she refuses.  It’s a subtle statement that she doesn’t need his help, nor do any women.  They just deserve what’s fair.  Hawkins gives a great speech.  She implores,

“You gotta stand up for what’s right.  Cause otherwise you wouldn’t be able to look yourself in the mirror.  When did that change?  When did we decide to stop fighting?  I don’t think we did.  But you gotta back us up.  We are the working masses, men and women.  We are not separated by sex but only by those willing to accept injustice…and equal pay wages for women is right.”

I don’t want to spoil the end of the film (I loathe spoilers!) but I will say that in reality, in 1970, the Equal Pay Act became law in the UK.  During the credits, the real women of Dagenham speak about their fight.  Similar legislation quickly followed in other countries.  And yet, we here in the U.S. can’t seem to recognize what’s fair.  Luckily the Lily Ledbetter Fair Pay Act, which addresses wage discrimination, was signed into law last year.  But this doesn’t mean we have equal pay.  Women still only earn 77 cents to every dollar a man makes, while African American women earn only 72 cents and Latinas 60 cents.  As a sidebar, the U.S. is only 1 of 4 industrialized nations that do not offer paid maternity leave.  What the hell U.S.?!  Why can’t we get our frakking act together??  Do we really think that women don’t deserve equal pay?!  Now of course no one is going to say, or at least admit, that.  Opponents to this legislation say that it will be unfair to men and pit men against women.  But the reality is that this is some outmoded tactic and ideology to keep women “in their place,” always a few steps behind the men. 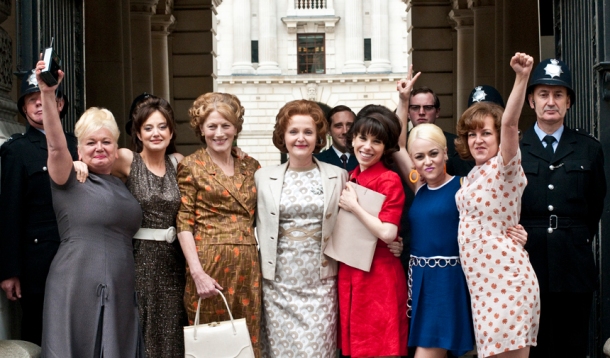 The acting and dialogue are fantastic.  The film also passes the Bechdel test as there are many conversations between two women or more that have nothing to do with men.  The female characters discuss wages, work and children.  What’s refreshing about the film is that while the women do disagree at times, they never turn their backs on one another.  They’re never catty or backbiting; they are a united front.  You don’t see that in too many films.

This is an incredibly empowering film.  I was so glad to learn about this revolutionary moment in history.  (P.S. I’m pissed that this is the first I’m hearing about it.  Why didn’t I learn this in my history classes in high school or college??)  As my fave blogger Melissa Silverstein pointed out, it’s ironic that Made in Dagenham was released in NYC and LA immediately after the Paycheck Fairness Act didn’t pass the Senate.  But it’s also a sad reminder that things still haven’t changed that much.  We still think of women as “girls” and men as men.  Sexism is still alive and kicking, even if it has become insidiously covert.  And we still haven’t achieved equal pay here in the U.S.

Seriously, everyone NEEDS to watch this film.  Movies are a great way to step outside of ourselves and see the world through another’s eyes.  These crusaders of justice were ordinary women who weren’t seeking fame; they just wanted to stand up for what was fair and just.  I hope men and women watch this and realize the inanity of not passing equal pay legislation.  I hope it motivates future generations of women to stand up for what they believe.

2 thoughts on “She Still Works Hard for the Money: Chronicling Women’s Battle for Equal Pay, ‘Made in Dagenham’ is a Must-See Film”