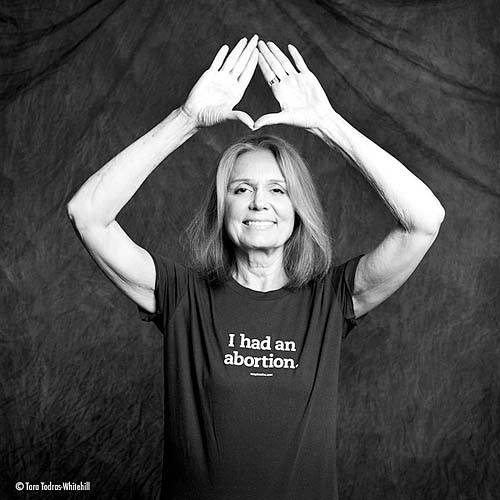 If you had an abortion, would you tell anyone?  Would you talk about with your friends or family?  Or might you discuss it online with strangers?

A media frenzy soon followed after Steph Herold, an amazing pro-choice activist, tweeted the #IHadAnAbortion hashtag on Twitter about a month ago.  For those who don’t know, hashtags are a way to categorize or tag topics on the social networking site.  Herold also created the website and Twitter profile “I Am Dr. Tiller” in honor of the murdered abortion provider, as well as founding the reproductive justice activist website Abortion Gang.  Herold started the hashtag as “a form of pro-choice activism,” hoping to create dialogue around abortion and diminish the societal stigma associated with having an abortion.  In an interview with The Nation, Herold shared,

“My immediate motivation for this project was a blog post that compared the modern prochoice movement to the gay rights movement in the 1970s. What strengthened the gay rights movement then, according to the author, was individual people coming out, and the general public realizing that homosexuality is more common (and normal!) than they ever imagined. The author of the post posed an interesting question: why don’t we do that for abortion rights? In reality, abortion is a regular part of women’s lives. Why not use Twitter to demonstrate that?”

Within the first few days, people wrote over 2,000 tweets using the tag.  Herold discusses the people sharing their stories:

“There have been all kinds of abortion stories on the hashtag, ranging from women who had abortions before they were legal in the US to women who had an abortion last month. There is such a diversity of abortion experiences on the hashtag, which I love because it mimics reality: there is no “average” abortion story…But I’ve had many women tell me that the activity on the hashtag made them feel less alone in their experience with abortion, even if they don’t feel comfortable tweeting their own story. Others have reached out saying that reading other stories has made them want to become a more vocal, active part of the prochoice movement.”

So why is this is so controversial?  Why do some people have a problem with women sharing their personal stories about their abortions?  Anti-choice advocates obviously don’t want women having abortions.  Yet some pro-choice advocates don’t want it discussed either.  Some women would of course prefer to keep their experiences private, as Aspen Baker, from the abortion counseling non-profit Exhale, purports in The Nation. She also argues that this campaign fuels anti-choice advocates. Women should absolutely have every right to keep their experiences to themselves. CNN even covered the story (albeit in a sadly biased way) and talked about how anti-choice people as well as some pro-choice supporters believed tweeting trivialized the issue of abortion.  But what many people fail to realize is that using social media is a way to connect with people, share stories and galvanize issues.  Why do women need to be ashamed of their decision?  Should women be locked away in closets?  The agency of voice, of women speaking and asserting their fears, desires, triumphs and hardships, is powerful.

In another interview with the reproductive rights site RhRealityCheck, Herold shared the tweets that struck a chord with her:

RT @chelsad: I’m adopted & appreciate what my bio-mom did, but when pregnancy made me too sick to keep a roof over my head, #ihadanabortion

Discussing abortions on Twitter is not the first usage of social media in which to talk about the issue.  Exhale is Pro-Voice is the blog by Exhale, a California-based nonprofit, “created by and for women who have had abortions in order to promote our emotional wellbeing.”  There are also the sites ImNotSorry.net and 45 Million Voices that allow women to tell their stories online.  But what’s different about Steph Herold’s Twitter campaign is that it not only allows people to briefly tweet, it also engages readers who might never otherwise seek out an abortion support site.  It broadens the audience and the dialogue.

Women who have had abortions have shared their thoughts and experiences and pro-choice women and men have conveyed their support.  Yet it’s even opened the doors for anti-choice advocates to express their opinions.  Not surprisingly, many of their tweets have been in condemnation of abortion even comparing it to the Holocaust (WTF?!).

Earlier this month, Herold started using an #IHadAPregnancy hashtag, hoping women will share their entire “reproductive histories”: pregnancies, miscarriages and difficult pregnancies.  When it comes to pregnancy, people usually only talk about the nursery, due date and baby names; but that’s not everyone’s story.  Just as Herold’s tweet allows women to share their views on abortion, a few other venues have arisen for women to share their experiences about another taboo topic: miscarriages.

Journalist Lisa Ling (one of my idols!) and digital media executive Sophia Kim, had a similar motivation when they recently launched their website “The Secret Society of Women“ to discuss topics affecting women, such as aging, body image, relationships and sex.  Six months ago, Ling suffered a miscarriage.  Earlier this week, Ling confessed to the ladies on The View how losing a child made her feel “more like a failure.”  So Ling and Kim started the site as “a sort of online confessional space, where women can share everything from hidden feelings of grief to secret addictions.” 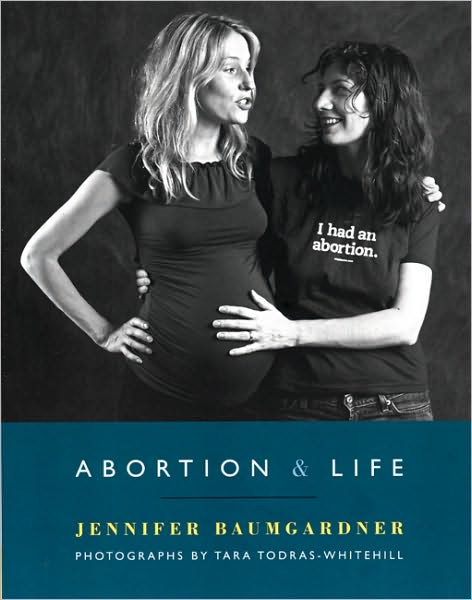 Social media isn’t the first venue in which a public forum has been used to discuss a seemingly private matter.  Six years ago, feminist writer/filmmaker/activist Jennifer Baumgardner (another one of my feminist icon idols!!) filmed the documentary I Had an Abortion, wrote the book Abortion and Life and created “I Had an Abortion” T-shirts.  In her book, she wrote that she was inspired to create T-shirts after attending a pro-choice rally in college.  She saw people wearing T-shirts with “in-your-face messages” and wanted to create a T-shirt with “I Had an Abortion” which she believed was “both quiet and yet the boldest message on could brandish.” Bitch Magazine quoted Baumgardner as saying,

Six years later, Baumgardner’s prophetic words still ring true.  Sadly, an attack on our reproductive rights is precisely what we currently face after the latest elections.  Sarah Kliff, reporter at Politico, sums up the abortion political landscape and the upcoming battles ahead:

“They [pro-choice advocates] have reason to worry:  Anti-abortion advocates are planning an aggressive strategy at both the state and the federal level. At a National Right to Life Committee state strategy conference last week — hastily convened after activists realized the extent of their legislative gains — the anti-abortion lobby announced it would focus on three model laws that have already seen some success on the ground.” 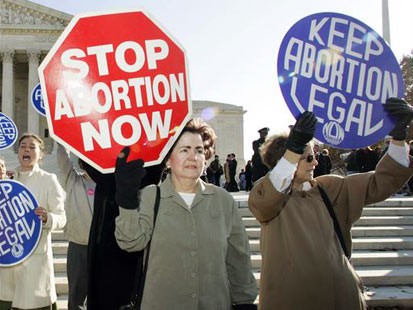 With the GOP now in charge of the House, there are five U.S. Congressmen in particular, including new slated Speaker of the House John Boehner, who are gearing up for anti-abortion legislation.  Some of the wonderful bills we have to look forward to?  At the state level, a bill on fetal pain, mandatory ultrasound viewing prior to an abortion and banning insurance coverage of abortion. And of course there’s the parental notification law in Alaska.  At the federal level, anti-abortion advocates seek “a permanent Hyde Amendment, which bars federal funding for abortion-related activities” and eliminating funding of Planned Parenthood.

Echoing Baumgardner’s public strategy, Herold calls pro-choice women and men to action with her initial #IHadanAbortion tweet, “Who’s had an abortion?  Let’s show antis we’re not intimidated by scare tactics.”  I wish there were more women like Herold standing up for reproductive justice.  Thankfully, the mainstream media have recently begun to call people prochoice/anti-choice or supporters of abortion/opponents of abortion, shifting away from the pro-choice/pro-life dichotomy.  This is important as language and naming are powerful.  Pro-life is NOT accurate.  Pro-choice people care about life too…the lives of women.

Women’s bodies are their own; no one has the right to decide what a woman should do with her body but her and her doctor. Yet women’s bodies have become a battleground of ideologies.  The “I Had an Abortion” and “I Had a Pregnancy” hashtags are a way to increase discourse and awareness about reproductive rights.  But they also allow women to open up and voice their opinions and feelings with others.  Hearing other women’s narratives is a way to let them know they are not alone.  But men should be part of the discussion too.   When asked about the role of men in reproductive rights in a recent interview with The Daily Femme, Herold said,

“We need men to be vocal advocates for reproductive rights — the movement is stronger with them in it. Reproductive rights aren’t just about women’s rights; they are about basic human freedoms. Men have to be a part of that conversation. We need their support in making sure every woman, every family, has the ability to decide when, if and how to have children.”

Women should be free to speak about their lives. We need to stop stigmatizing women who have had abortions.  There is no typical abortion experience; women feel diverse emotions and experience situations uniquely.  It’s important to remember that 1 in 3 women have had an abortion.  But it’s also important to remember that these statistics don’t merely represent numbers, they represent women’s choices and women’s lives.  Women of all ages, races, ethnicities, religions, socio-economic statuses, sexual orientations, backgrounds and views have had abortions.  They are our mothers, daughters, sisters, nieces, friends, girlfriends and wives.  By listening to women’s stories and making the political personal, maybe we can begin to shift away from judgment and shame towards acceptance and compassion.

8 thoughts on “Not Just Telling Stories: Women Speak Out About Their Abortions on Twitter as a Form of Activism”