As the wannabe politico that I am, I was excited for the State of the Union address last night.  Although I knew I would miss Nancy Pelosi bouncing out of her chair and clapping every 2 seconds.  President Obama always motivates and rouses an audience.  So I was prepared to be uplifted again.  But instead, my heart sank.

I’ve defended Obama numerous times to both Republicans and Democrats.  He has championed women’s causes.  When asked his stance on abortion, he said, “I trust women. Period.”  He’s increased funding for the Violence Against Women Act (VAWA) and reversed the Global Gag Rule.  He’s supported phenomenal legislation like the Lilly Ledbetter Fair Pay Act, which protects women against wage discrimination, and the Hate Crimes Prevention Act.  He has appointed women (Hillary Clinton, Kathleen Sebelius, Janet Napolitano) and women of color (Sonia Sotomayor, Valerie Jarrett). While I am thrilled that he has done so much to advance women’s rights, where the hell were women’s issues last night?

Obama opened the address discussing the tragedy in Arizona and the health of “their colleague, Gabby Giffords.”  But he glossed over the incident, perhaps not wanting to dwell on the negative.  But it would have been great if he had discussed her strength as an individual and yes, as a woman, particularly considering the lack of women in elected office.  He covered a wide swath of topics including the economy, jobs, innovative technology, eco-energy and the war in Iraq.  But no mention of the reauthorization of the Violence Against Women Act (VAWA).  Nothing about protecting pro-choice laws.  Not one word about equal pay.  And for all those people who think this isn’t the time, we have more important issues to rally around, women’s issues affect everyone.  Women’s rights ARE human rights. 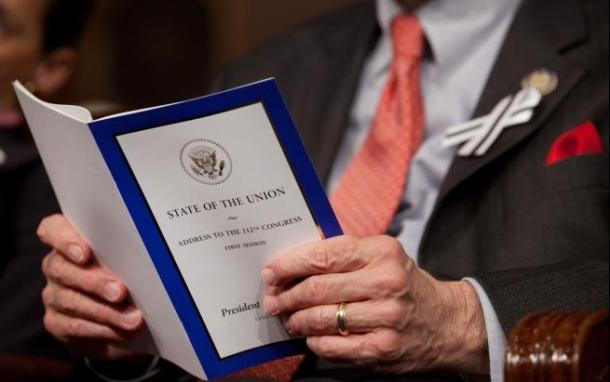 Luckily, Obama did talk about the repeal of “Don’t Ask, Don’t Tell (DADT),” the only time he broached the topic of gender the whole evening.  Obama declared,

“Our troops come from every corner of this country — they’re black, white, Latino, Asian, Native American. They are Christian and Hindu, Jewish and Muslim. And, yes, we know that some of them are gay. Starting this year, no American will be forbidden from serving the country they love because of who they love.”

Damn right!  And don’t get me wrong, I was delighted that he talked about DADT.  But I wish Obama had used this as a springboard to go one step further, saying how DADT affects queer women and transgender individuals (men and women) differently than gay men.  UPDATE: Transgender troops still can not serve openly in the military. And we also need to focus on LGBTQ rights other than serving in the military.

So what DID I like you ask??  I was elated by Obama’s emphasis on education.  He declared,

Teachers received a standing ovation, rightfully deserved.  Obama also talked about “Race to the Top,” a program designed to stimulate reform in elementary and high school education.  As a community college alum, I was also thrilled that community colleges received a shout-out as they never do.  And I couldn’t agree more with his assertion that teachers and education are crucial to the U.S.’s success.

I was also happy he discussed human rights in Sudan and Tunisia.  Yet it was a strange juxtaposition as he kept comparing the U.S. to China, one of the worst violators of human rights.  One of my fave parts was when Obama proclaimed,

“…American Muslims are a part of our American family.”

Damn right they are! Stop assuming all Muslims are terrorists, people!!  Due to all of the racism Muslims perpetually face in this country, it was important for him to make that distinction.

I also loved that Obama talked about immigrants, particularly students.  He gave a nod to the DREAM Act, legislation that aids children of immigrants go to college.  But I was immediately disheartened when he transitioned from this to talking about “illegal immigration.”  While he did say “undocumented workers” at one point, labeling people “illegal” or “aliens” has a nasty, negative connotation.  For such an enlightened person, I was stunned he uttered the i-word.  Too many people in the U.S. scoff at immigrants, wondering why they don’t come here through the proper channels, the way their relatives did.  But what people don’t realize is the amount of money it costs to immigrate to the U.S. (thousands of dollars) and that you usually have to have a job sponsor you.  If you’re an impoverished person, you probably can’t afford to pay all of the fees to come here.  As a nation of immigrants, it amazes me how intolerant people are of other immigrants.

At one point during the address, Obama said,

“What’s more, we are the first nation to be founded for the sake of an idea — the idea that each of us deserves the chance to shape our own destiny.”

The ideas that resonate with me in the U.S. are equality and freedom.  As someone who has advocated for women’s rights in the past, I wish Obama’s State of the Union covered reproductive justice, equal pay, VAWA and LGBTQ rights.  Maybe it seems that I’m asking too much.  But considering how kick-ass Obama has continually been since he exploded onto the political scene at the DNC in 2004, I don’t think I am.  I’m hard on him because I have high expectations.  Obama has always called for change.  I wish he had taken the opportunity on a national platform to champion for change yet again, becoming a harbinger towards much-needed gender equity.  Then perhaps the U.S. I imagine will no longer be a myth but a true haven of equality and freedom.

One thought on “No Woman’s Land?: Lack of Women’s Issues in President Obama’s State of the Union”