For most of my working life, I’ve lived paycheck to paycheck.  As someone who worked full-time while putting myself through college, I never had a dime to spare.  I’d often forgo health insurance in order to have money in my pocket.  I knew it wasn’t the wisest decision, but if it was between buying groceries or paying for insurance for something that might or might not even happen, I figured I was better off paying for food.  While I certainly don’t recommend going without insurance, I know it’s something many people must do.

As most of you know, the GOP is savagely waging war on women and their bodies, ravaging reproductive rights. One of the battles involves the GOP’s attacks on Planned Parenthood through the Pence Amendment in the federal budget (Amendment No. 11 to H.R. 1), sponsored by anti-choice douchebag de jour Rep. Mike Pence (R-IN) (the same asshole behind the Title X Abortion Provider Prohibition Act which attacks Planned Parenthood).  Last week, the House voted to pass this despicable amendment which would strip the non-profit of all of its federal funding.

Many people associate Planned Parenthood with abortion.  My fab friend Sarah H., who worked at a Planned Parenthood in Florida, told me about times anti-choice proponents would protest in front of her clinic along with bomb threats they received.  What kills me is how the anti-choice movement tries to co-opt support for life.  Yet if they were really interesting in protecting life, anti-choice zealots wouldn’t try to assassinate medical care providers and pass legislation harming women.

Supporters of the Pence Amendment claim they don’t want to fiscally support abortion.  Yet Planned Parenthood’s services extend far beyond abortion.  They provide contraception, comprehensive sex education, mammograms, cervical cancer screenings and screenings for  STDs.  In fact, abortion constitutes only 3% of their provided services.  Three percent!  And the federal dollars they receive don’t even fund abortions.  So really, the Pence Amendment’s efforts to defund Planned Parenthood and other clinics has nothing, nada, zilch to do with abortion.  What DOES it have to do with?  Seething hatred for women’s bodies and a desire to control their sexuality. 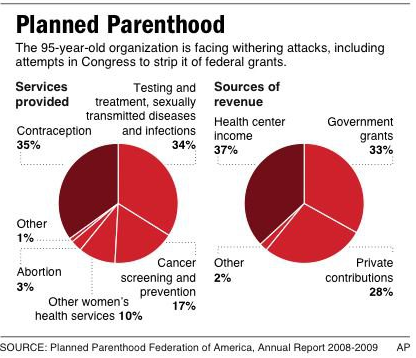 Riese Lyn Bernard at Jezebel , who shares her own experiences going to Planned Parenthood, talks about how the non-profit is a savior for many people:

“…Planned Parenthood isn’t just about providing abortions (which account for only 3% of the services PP provides) or services to at-risk populations, although that’s what it’s most revered for. It’s also a rare beacon of support and care for average everyday teenagers who, for a number of culturally reinforced reasons, are scared to talk to their family doctor or parents about birth control but are responsible/educated enough to know they need it…Furthermore, as an adult I’ve noted that amongst queers and sex workers, Planned Parenthood can be the only place where these women feel comfortable speaking openly about their sex lives without fearing rejection or political attacks.”

But Planned Parenthood isn’t the only entity who stands to lose funding in this fight.  4,600 hospitals and clinics, both public and private, would suffer.  Loretta Ross, National Coordinator at SisterSong , a reproductive justice collective for women of color, declared in a press release,

“This bill doesn’t just deny Title X money to Planned Parenthood, but to any reproductive health organization that performs abortions, including hospitals and the small community clinics that provide HIV prevention services, STI testing, and preventive care for teens.”

In NARAL Pro-Choice America’s petition against the Pence Amendment, they state the necessity for Title X funding which supports Planned Parenthood as well as other clinics and hospitals: 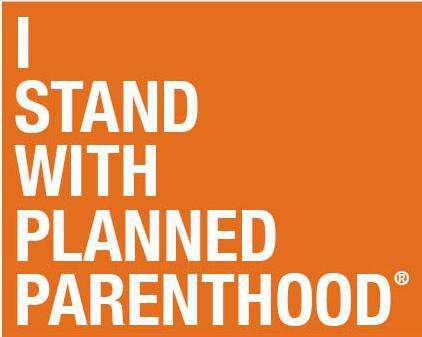 Amanda Marcotte at Double X responds to the question on most people’s minds: in this era of plunging jobs and fiscal instability, why the hell is the GOP attacking contraception?!  She asserts “that the recent emphasis on fiscal discipline has opened up a new path towards restricting contraception access.”  Marcotte writes,

“Anti-abortion activists and legislators have calculated that by framing anti-abortion proposals as austerity measures, they can bring along Tea Partiers and other fiscal conservatives. As Pence has put it: “What is more fiscally responsible than denying any and all funding to Planned Parenthood of America?”…Of course, rhetoric that attacks federal funding for contraception as a state-subsidy for promiscuity obscures the fact that continuing Title X is one of the more fiscally sound things the government can do: Research from the Guttmacher Institute demonstrates that every dollar spent on family planning saves the government four dollars down the road.”

If the GOP truly wanted to curb the number of abortions, they would support preventative measures like comprehensive sex ed and birth control.  Despite the House’s depressing decision, there was a valiant effort to block the Pence Amendment.  Rep. Debbie Wasserman Schultz (D-FL) discussed the number of people helped by Planned Parenthood and Title X funding:

“Let me tell you what it does to women who cannot plan their parenthood.  It derails their ability to complete education and training so they can get a job…Planned Parenthood is healthy for women, healthy for children and its healthy for our society.”

For anyone who doubts that this is an onslaught to women’s sexuality, and not just abortion, pro-choice and anti-choice proponents had an uneasy truce when it came to abortion in cases of rape and incest and in preventing pregnancies.  Rep. Stephen Lynch (D-MA), a self-proclaimed pro-life Democrat is appalled by the Pence amendment.  He argued,

“I think we agreed at one point in this country that the best way to reduce abortion in this country is to prevent unwanted pregnancies.  We used to agree on that.  This bill, this amendment, will increase the number of abortions in this country.  I don’t have many friends in the Planned Parenthood community.  They don’t support me; I’m pro-life.  But I respect the good work that they do.”

“The cuts were proposed under the guise of being fiscally responsible, but nothing could be further from the truth. For every dollar — and I want to say this maybe twice it is so important because nobody seems to have gotten this except my new friend from Illinois — for every dollar invested in family planning services, taxpayers save $4. So if you think you’re going to save yourself some money, go back to your planning board for that. But cutting family planning is not fiscally responsible, will not reduce the United States bottom line.”

During the debates, anti-choicer extraordinaire Rep. Chris Smith (R-NJ), the same douchebag who sponsors the No Taxpayer Funding for Abortion Act (H.R. 3), disclosed his disgust for abortion by describing one of the methods, a dilation and evacuation (D & E) procedure, as if it was a gory scene from a slasher film.  In response to his rant, Rep. Jackie Speier (D-CA) (my new hero!) passionately shared her own personal tragedy.  Rep. Speier underwent a D & E, although she doesn’t consider the procedure an abortion but rather a miscarriage, since she didn’t want her pregnancy to end. She divulged,

It’s rare for a woman to speak openly about her miscarriage or abortion on a public platform.  Both carry so much stigma; yet neither should.  After the House passed the Pence Amendment, Rep. Speier said,

“It is time to stop politicizing women’s health. For some, describing a procedure like the one I endured is nothing more than talking points. But for millions of women like me it’s much more-it’s something that will always be a part of us.”

We should remember Rep. Speier’s words.  While numbers and stats are important to keep in mind, people’s personal stories are far more powerful.  As for me, I luckily have health insurance now.  But many people aren’t as fortunate.  I still donate to Planned Parenthood because of all the amazing work they do each and every day.  If the Senate passes the federal budget (H.R. 1) with the Pence Amendment and it’s signed into law, not only will Planned Parenthood lose funding; millions of people will be without vital health services.

The GOP doesn’t care about low-income individuals and they certainly don’t give a shit about the women and men who will be affected.  Instead, they care about pushing their religious, conservative, misogynistic agenda down the throats of the American people.  A person’s body and their sexuality are their business, no one else’s.  But conservatives want to strip women of their autonomy, punishing them for their sexuality.  They won’t be satisfied until all women become handmaids subservient to the government.

2 thoughts on “Standing in the Way of Control: Why the GOP’s Ongoing Attacks on Planned Parenthood Affect Us All”