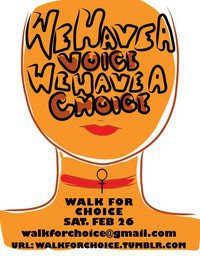 Just wanted to remind you all that tomorrow (Sat. 2/26) is Walk for Choice Day!  Across the country, people will stand up for reproductive rights by walking in cities such as NYC, Boston (my city hoowah!), Chicago, DC, Dallas, Atlanta, Phoenix, Houston, Minneapolis, Tampa, Los Angeles, San Diego, Orlando, Seattle, Portland, Detroit and so many more.  There will also be international rallies held in Canada, Australia, Pakistan and the UK!

Recently, I’ve been blogging and tweeting my ass off about all of the invasive attacks on women’s health.  Federal and state legislators have declared war on women and reproductive rights with laws trying to redefine rape, bar insurance coverage of abortion, informed consent, defunding Planned Parenthood and banning abortion after 18 days. It seems like every day I wake up to some new ridiculous legislation filed.  Here are some of the latest anti-choice bills at the state level:

But anti-choice legislators have gone beyond merely attacking abortion.  They are going after Planned Parenthood and contraception too. Over at Fair and Feminist, blogger Shelly compiled a list of bloggers writing today about why they stand with Planned Parenthood.  I’ve said it before and I’ll say it again…this is NOT just an attack on abortion (although anti-choicers are trying their damnedest to repeal Roe v. Wade).  This is an attack on contraception and reproductive healthcare; in short, an assault on women’s autonomy of their bodies.

I know many people are disillusioned with our government, thinking that nothing they do can make a difference.  But I’m here to tell you that we can.  We can stand up for our beliefs and our principles.  We must make our voices heard.  So Walk for Choice tomorrow…because if you don’t defend your rights, who will stop someone from taking your rights away?

One thought on “These Boots Are Made for Walking: Walk for Choice Day Tomorrow to Stand Up Against Anti-Choice Legislation”