I know it’s been awhile since I’ve shared with you all my feminist escapades in NYC participating in Soapbox Feminist Winter Term.  Blame it on the bullshit anti-choice legislation, wine drinking and the Oscars.  But I want you to get a sense of what this life-changing week encompassed.  So let’s pick up where we left off shall we?

Last time, I told you about our Media Day and how we spent an amazing morning at Bust Magazine and Feminist Press.  As if I thought this day couldn’t get any better, for the second half, we attended a feminist writers panel with the articulate Jodi Kantor (NY Times), hilarious and inspiring Latoya Peterson (Racialicious) and all-around badass Ariel Levy (The New Yorker, Female Chauvinist Pigs).  With humor and candor, they shared with us their backgrounds and journeys to become professional writers.

Jodi Kantor, a NY Times columnist, attended Harvard Law, not even thinking she could make a living as a journalist.  Her boyfriend (now husband) was a journalist.  She said he had the courage to become one.  Kantor eventually worked at Slate as an editor for 4 years.  Then The NY Times recruited her in an unusual way.  She had never worked in print before.  At the age of 30, Kantor realized she wanted to be a writer, so she became a reporter.  She wrote about Barack Obama, Hillary Clinton and the 2008 election.  She then became a D.C. correspondent.  Kantor is currently working on a book about what happened to the Obamas once they came to the White House.

1. A mistake is trying to impose coherence on your resume.  She said that many young people have disparate jobs and experiences; and that’s perfectly okay.

2. Don’t be too introspective – tempting to look inside your soul and try to figure out what you want to do.  Take the most interesting job(s) you can.

3. You have a window to do what you love and take risks.  You become more encumbered with responsibilities as you age.

Latoya Peterson is a writer, blogger and founder/editor of the race & pop culture blog Racialicious.  She ran away from home when she was 17.  She was working in a Blimpie’s and living out of her car.  Like Kantor, Peterson never thought she could make money as a writer.  Instead, she worked various jobs as a litigation assistant, developing film and waiting tables.  Peterson eventually worked at a website and then at the Library of Congress, where she made lots of money but hated her job.  Meanwhile, she was part of an online community with Addicted to Race, podcast that “explores mixed race identity and interracial relationships.” She’d also been attending community college but decided to quit so she could work as a writer full-time.

Peterson does a lot of feminist analysis on pop culture.  At first, she wrote for free, blogging at Racialicious.  Then she got first paid article for Bitch Magazine.  Over time, Peterson garnered a following with Racialicious with a reputation for analyzing feminism in non-traditional fields (like sci-fi).  She worked at other sites such as Jezebel and Feministing.  Now, Peterson gets paid as a freelance writer as well as a speaker and a digital media consultant (for Wikipedia, NPR).  A self-identified hip-hop feminist, she wants women and minorities to enter spaces they’re not supposed to be in or don’t normally live in.

Ariel Levy is a staff writer at The New Yorker and author of Female Chauvinist Pigs.  Her background is in television with her first job at the Late Show with David Letterman.  While she was on a film production track, she actually aspired to be a writer.  Levy told us that she knew she wanted to write and was extremely aggressive about it.  She worked at a gossip mag and later as an assistant to New York Magazine.  One day, Levy decided to just up and write a piece, which she then submitted.  The editors enjoyed her work, so she kept on writing pieces, gaining more and more writing responsibilities, eventually becoming contributing editor.  Levy wrote an article entitled “Female Chauvinist Pigs” which would become the basis for her book of the same title.  Her book explores sexuality and the objectification of women in society along with the relationship between the women’s movement and the sexual revolution.  For her current job at The New Yorker, Levy offered to freelance for them.  She told one of the staff, “Well, you could hire me but we’re not going to have a quickie.”  So she was hired!  Levy likes to bring “fringe” behavior into the mainstream.

1. It’s harder to suck it up the older you get. So take chances when you’re young.

2. However, you CAN make a career change mid-career.  You can do anything if you possess enough will to do it.  Levy freelanced on the side.  It’s a lot of hustling though.

1) Q: How do you change from a corporate or non-profit career to a writing career and still make money?

A: Latoya – Get your finances in order.  She said to read The Money Book for Freelancers, Part-Timers, and the Self-Employed and My So-Called Freelance Life.  Most places which have freelancers take 60 days to pay you and oftentimes, they pay late.  Take a pitch-writing class so you know how to pitch yourself.  Your relationships with editors are crucial.

A: Jodi – Sometimes I feel like I’m writing into the void.  You never know though who’s reading your work.  You can’t think about the numbers.  Being a feminist has been an asset to me.

Ariel – Being a feminist is an asset because publications are always looking for a different perspective.  Just because we’re feminists, doesn’t mean we’re absolved of doing something really well.  Fill your audience’s needs.  A reader doesn’t want to be talked down to; they want to be entertained, amused and have their hand held.

Latoya – She wrote a piece for Yes Means Yes anthology.  Jaclyn Friedman asked her to write something.  At first, she didn’t think she had anything to contribute as she had never been raped.  But then she spent 4 months mulling over events in her life and writing about things she’s witnessed and experienced, such as sexual assault.  You don’t have to personalize everything.  But there’s power in what we share.  She wrote the essay in Yes Means Yes for the women of color who don’t get represented.  At the Women in Action Media (WAM) Conference that Friedman organized, controversy arose.  Bloggers debated who gets to represent feminism.  They met resistance with the publishing firm Sealed Press who said they needed a higher profile feminist like Jessica Valenti.  Then Amanda Marcotte, feminist blogger at Pandagon, released her book It’s a Jungle Out There with a racist cover.  Both incidents ignited a firestorm with women of color and caused a boycott of Sealed Press.  “Women of color often write about gender but don’t often call it feminism or themselves feminists.” 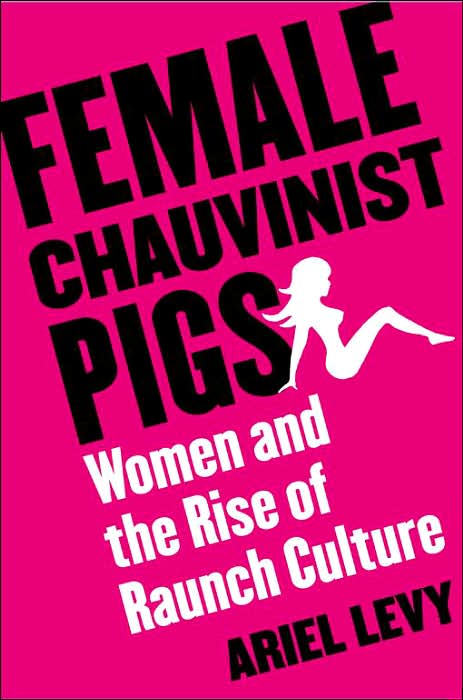 3) Q: About Female Chauvinist Pigs, Ariel, how do you feel about making a statement about feminism and having a strong opinion and getting deemed a radical and dealing with negative feedback?

Jodi – She used to be scared to ask strangers questions as an interviewer.  But now she’ll ask anyone anything.  She’s gotten much bolder.  Although she also once received razor blades in the mail for a piece she wrote (OMG!)

Ariel – When she first published the book, she “was jumping out of her skin” if people didn’t like it.  But now she feels like if you don’t like it, don’t read it.

Latoya – Keep your ear out for good criticism though.  The danger you run into is that you might think your feminism is THE feminism.  If you miss hearing what other people say, you’re missing a large swath of views.  The problem in feminist blog wars is that one person will say here’s who I am and that’s how it is.  But other readers and writers will say but that’s not my experience.

4) Q: As public feminists, how do you feel about women who don’t call themselves feminists, even if they are?

A: Jodi – “I’d rather show my feminism through my work.  I care more about that than my label.  At some point, trying to convert people will lose its luster.”  For her, she tries to focus on the people who care about what you’re putting out.

Ariel – “It would be nice if people called themselves a feminist.  I mean c’mon.  But if people live their life that way, that makes me happy.”

Yet again, I was blown away by these intelligent, inspiring, feminist icons.  I loved hearing how they’ve each fused feminism with their careers.  The diversity of the panel regarding race, sexual orientation and perspectives impressed me.  Kantor was thoughtful and reserved, possessing a quiet passion; Peterson emitted an eloquent energy, speaking about her intersectional experiences as an African-American feminist; Levy, who you could tell didn’t take shit from anyone, dropped F-bombs (both fuck and feminist!) with fluidity.

As I yearn to transition from my career in the non-profit sector to one as a paid writer, thoughts of going without food, getting evicted from my apartment or not being able to pay my student loans plague my hopes.  Is there room in journalism and the blogosphere for another feminist writer??  Yes, of course…we need more journalists and writers critically analyzing current events, the media and pop culture through a feminist lens.  Am I too old to go after my dreams???  Don’t worry, I know I’m not.  But I still worry.

Listening to all of the powerful panelists’ advice and stories, I realized that (as it is with all careers) no one path to writing exists.  So it’s time to drown out any negativity or doubts and listen to that burgeoning voice inside me that says, “Get your shit together and grab life by the balls.  It’s time to turn your dreams into reality.”