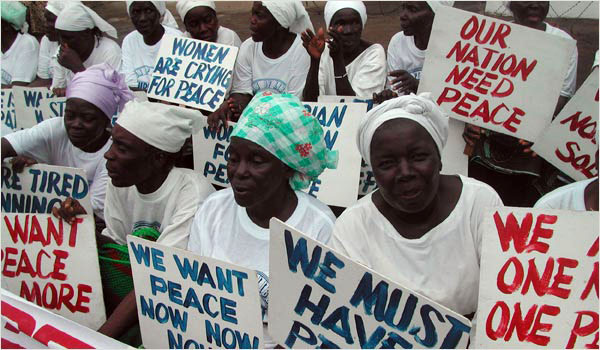 Men often dominate the debate of war, negotiation and even peace. Only one woman had ever won the Nobel Peace Prize in Africa. Until now. Last month, three women won the prize, including Leymah Gbowee and President Ellen Johnson Sirleaf (along with Tawakkul Karman in Yemen) who fought for women’s rights and helped achieve peace in war-torn Liberia.

We often think we can’t make a difference in the world. We’re just one person. How can anything we do matter? But the activism of the women of Liberia should inspire us all to realize that we can impact change.

In the 2nd installment of the Women, War & Peace series, director Gini Reticker and producer Abigail E. Disney, and WWP series executive producers and co-creators, create a Tribeca Film Fesitval-winning documentary. Pray the Devil Back to Hell tells the powerful and uplifting story of the Liberian women, including activist and social worker Leymah Gbowee, who joined together and peacefully protested, helping end the civil war ravaging their country.

For almost 15 years, beginning on Christmas Eve in 1989, two civil wars plagued Liberia. Warlord and former president Charles Taylor resided at the center of both. He overthrew the regime during the first civil war and committed war crimes and human rights atrocities while president during the second civil war. Taylor recruited soldiers as young as 9-15 years old. With his private army, the dictator controlled the finances and terrorized the country.

“Life was bad. People…couldn’t even afford a cup of rice.”

Everyone in Liberia lived in a perpetual state of fear. Gbowee told how she trekked to her parents’ house, walking for 7 hours, while 5 months pregnant with her two young children. Her 3-year-old lamenting that he just wanted a piece of donut to eat. She said:

“Liberia had been at war so long that my children had been hungry and afraid their entire lives.”

“Some say war was about the gap between rich and poor. Some also say it was about the hatred between the different ethnic groups. Others say the war was to control natural resources. Power, money, ethnicity, greed…but there is nothing in my mind that should make people do what they did to the children of Liberia.” 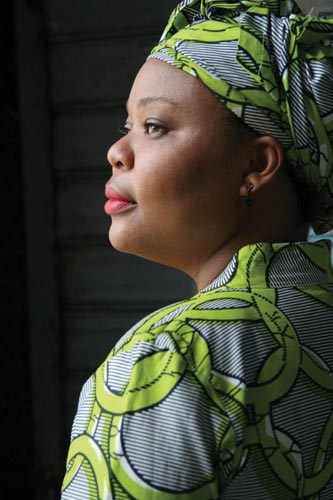 Gbowee shares the inception for her radically simple idea for peace:

“I had a dream and it was like a crazy dream. Like someone was actually telling me to get the women of the church together and pray for peace.”

Asatu Bah Kenneth, Assistant Director of the Liberian National Police, attended a meeting of the Initiative, the only Muslim woman in the church. Inspired by their work, she reached out to other Muslim women, encouraging them to get involved. Kenneth formed the Liberian Muslim Women’s Organization to work towards peace. Kenneth said:

“When I sold the idea to them, they were more than excited.”

Initially divided by faith, the Christian and Muslim women soon came together. The two peace groups united to form the Women of Liberia Mass Action for Peace. Vaiba Flomo shared:

“But the message we took on was: Can a bullet pick and choose? Does the bullet know Christian from Muslim?”

While the women were organizing, Taylor’s opponents prepared to go to war. The warlords wreaked havoc on the country, giving boys guns and intimidating civilians. Just as in Bosnia (and often happens in war), rape remained a constant threat for the women of Liberia. Journalist Janet Bryant-Johnson said:

People were forced to enter displacement camps. Not only did they live in “abject poverty,” people, especially children, died each day. The Liberian women went to the camps to see how people were faring. Their hope amidst tragedy inspired Gbowee:

“These women had seen the worst of the wars something that I had not seen but they still had that vibrancy for life. And just being able to help them, to sit and hold their hands, and to hug their kids and looking at people who had lost everything and still having hope, I think that was where I got baptized into the women’s movement.”

As the war progressed, the women wanted to take more drastic measures. Inspired by their faith, the women donned white garb to declare to people they stood for peace. Thousands of women protested at the fish market each and every day, a strategic location visible to Taylor. Carrying a huge banner stating, “The women of Liberia want peace now.” It was the first time in Liberia’s history where Christian & Muslim women came together.

While all of the women worked together, Gbowee’s indomitable will buoyed the women’s spirits. “Desperate for peace,” the women decided to engage in a sex strike from their husbands. As they protested, the women knew they had to be brave. Flomo declared:

“We were not afraid. My mother was like, “They will beat you people, and they will kill you.” And we said, “Well if I should get killed, just remember me, that I was fighting for peace.”

Kenneth became the women’s “spy,” keeping them abreast of developments. An international call for peace talks “emboldened the women.” Taylor initially refused to negotiate. But the women created a decree “demanding…not appealing” the Liberian government participate in the peace talks. Taylor finally decided to stop ignoring the women and meet with them, “the moment Gbowee had lived for.” The women marched to Taylor’s mansion to present their document. As they walked onward and chanted, groups of women joined them. When they reached Taylor’s mansion, Gbowee read their statement aloud:

Taylor succumbed to the women’s demands and attended the peace talks in Ghana. Some women traveled to Ghana to protest. Gbowee said:

As violence erupted in Monrovia, Liberia, some of the women remained in Ghana at the peace talks. Despite missiles and stray bullets, the other Liberian women risked their lives, continuing to protest each day at the fish market, singing and praying.

After 6 weeks, peace talks went nowhere. For the warlords, sleeping in lush accommodations and removed from the fighting, it was “like they were on vacation.” Frustrated, the women sat in the hall where the peace talks were held. “Seizing the hall,” the women locked arms and wouldn’t leave until a peace agreement was signed. Gbowee, accused of obstructing justice, passionately declared to the media at the conference:

“What we’ve done here today is to send up a signal to the world that we the Liberian women in Ghana, we are fed up with the war. We are tired of fighting, the killing of our people. We can do it again if we want to. And next time, we’ll be more than a thousand…We can do it and we’ll do it again.”

Two weeks later, they finally reach an agreement, including Taylor’s exile to Nigeria and the implementation of a transitional government until democratic elections held. As the women returned home, they were met with hugs and children chanting, “We want peace, no more war.” They knew their work wasn’t over as “peace is a process; it’s not an event.”

The women believed they couldn’t achieve peace until they attained democracy. So they campaigned for presidential candidate Ellen Johnson Sirleaf. With the “Iron Lady’s” election, President Johnson Sirleaf (who has helped erase the national debt, built schools, improved roads and increased access to healthcare) became the first elected female president in Africa. She acknowledged the Liberian women’s brave accomplishment:

“It is the women who labored and advocated for peace throughout our region.”

Despite the horrific subject matter of war, the uplifting documentary exudes optimism. The women achieved something “unimaginable.” The beauty of the documentary lies in director Reticker showcasing the Liberian women. With no narrator, she lets their voices speak for themselves.

“If we had not had different women from different walks of life, banding together, we may not have been able to solve the problem.”

Gbowee believes the film Pray the Devil Back to Hell has lasting impact and can inspire women to realize their power and mobilize:

” … This documentary is like a landmark or something that tells other women, ‘People did it before we came, we’ve done it, and they can also do it,'” she said. “So it’s not a fluke. It can happen. People just need to rise up and rise above the politics that so deeply divide us as women.”

The women’s tenacity, resilience and unity will amaze and inspire you. Social injustices plague the world; the staggering number of problems can overwhelm. But one person can make a difference; a powerful reminder that we each matter. We need to put aside our differences to combat injustice and reclaim peace. One voice can inspire others, triggering disparate voices to harmoniously come together; a symphony of voices can change the world.

Watch the full episode of Pray the Devil Back to Hell online or on PBS.