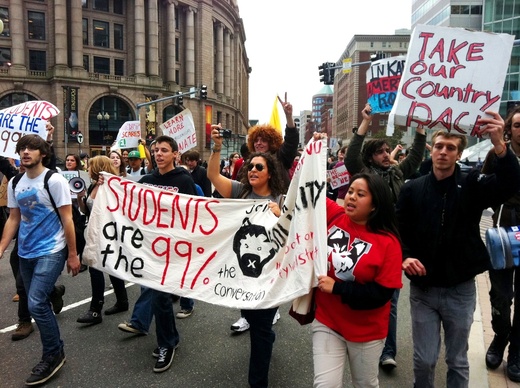 While I’ve been following Occupy Wall Street (OWS), I’ve got to admit that I have had mixed feelings about participating.

I consider myself a vocal activist. This year, I marched in Walk for Choice and SlutWalk and attended the rally to support Planned Parenthood. I admire the dedication and zeal of the Occupy protesters. And yes, I have ass loads of debt and student loans. And no, I don’t think the protesters consist of a bunch of lazy hippies who need to get off their ass and find a job. That’s just silly. It’s the lack of mainstream support for protests to support reproductive justice and eradicate rape culture which frustrates me.

Why the hell can’t feminist issues which work towards equality too garner this much support?

Feminist blogger & activist Sady Doyle, at In These Times, wrote about her own frustration with OWS:

“The men I knew who had been Occupying Wall Street were still not there with me at the year’s most heavily promoted anti-rape protest. I still couldn’t rationally expect them to be. The “next global feminist movement” still wasn’t moving strongly enough to occupy the city for three weeks. Or even one whole day.”

I couldn’t have said it better myself. But many other issues revolving around OWS have pissed me off:

But just because some people are shitty and sexist, doesn’t mean we should discredit the entire movement. Everyone involved needs to question their own privilege. Hell, we need everyone in society to do that.

I’ve been horrified by the repeated arrests and police brutality at multiple Occupy locations. Early Tuesday morning, the police cleared out Zuccotti Park, arrested protesters, forced press to leave and destroyed the camp including a library of 5,000 books protesters created. As a bibliophile who used to work in a bookstore, I shudder to think about the destruction of 5,000 books. It sends a message.

Books house much more than mere words. They hold ideas, revolution and hope. Destroying books attempts to destroy those morals. Banning the press from Zuccotti Park shits all over the freedom of the press and the free exchange of ideas. One of the greatest aspects of the U.S. are freedom of speech and the right to dissent. Mayor Bloomberg’s attack on Zuccotti Park says fuck you to our basic civil rights.

Inspired by the North African revolutions, today, just two months after it began, OWS has galvanized people to speak out and take a stand against economic injustice. While I want people to support the feminist and animal rights issues I hold so dear to my heart, it’s admirable if OWS gets people to shake off their apathy and continue to stand up for their rights.

One of the reoccurring themes that arises when people talk about OWS is community. My friend Leila Zainab Counihan, a kick-ass feminist who’s involved in organizing with Occupy Worcester, told me that while lacking racial and gender diversity, the movement has become so important to her for community-building, something lacking in so many of our lives.

On the Rachel Maddow Show, Bishop Gene Robinson, Center for American Progress Sr. Fellow, also talked about the merits of community. He said he viewed Occupy Wall Street, while being about economic inequities, spurred by a “grieving over the loss of community.” We are responding to our society where “it’s every man, woman and child for themselves, rather than a community.”

“How can we come together in a unity that is complex and emancipatory? Differences must not merely be tolerated but seen as a fund of necessary polarities to which our creativity can spark like the dialectic.”

Fab feminist Steph Rogers at Bitch Flicks wrote about her passionate support of OWS. In her astute critique of the movement, she found redemption in OWS’ ability to raise consciousness and explore economic inequalities.

Many other feminists have written about why they’re hesitant to support OWS, particularly the colonialism embedded in the movement, a need to decolonize Wall Street and how even the very word “occupy” is problematic. At Racialicious, hip-hop feminist Jess Yee said:

“What I am saying is that I have all kinds of problems when to get to “ending capitalism” we step on other people’s rights – and in this case erode Indigenous rights – to make the point…This is such a played out old record too, walking on other people’s backs to get to a mystical land of equity.  Is it really just and equitable when specific people continue to be oppressed to get there?”

And I think that’s my problem with OWS. We can’t oppress others in our quest to free ourselves from oppression. You shouldn’t slight one cause to further another.

As much as OWS has opened the dialogue for class, it lumps everyone into two categories of the 1% elite and everyone else. If we really want to discuss class (and believe me, we need to), we’ve got to look at the varied experiences of class and socio-economic status.

In a powerfully raw blog post at Tiger Beatdown, Sady Doyle writes about her own prickly past with class:

“But I’ve confessed, to at least one of them, that it scares me a bit, uniting behind a banner of the “99 percent.” I worry that this erases differences, erases histories, puts us into a position where all that matters is whether you are extremely wealthy or not, and I can’t match that up with my understanding of how class works, how it gets tangled up in all of these separate identities and oppressions.

Like Doyle, I too came from a working-class background. It’s an integral part of my identity. And therein lies the problem of OWS for me. Just as many women of color, trans women and disabled women may find the feminist movement problematic for too often focusing on upper-class straight white women, essentially erasing their unique intersectional experiences with racism, transphobia and ableism, I too have a problem with OWS for erasing my experiences as a woman from a working class background.

If this movement truly becomes about increasing community-building and consciousness-raising, even if capitalism isn’t eradicated or wealth redistributed, then perhaps it has succeeded. Part of me wants to protest in my city at Occupy Boston. Part of me wants to join in, standing in unity. But the mélange of classism and sexism stings.

Yes, we may be the 99%. But even within that percentage, we are not all the same. We are not all equal. I just hope more OWS protesters realize that truth.