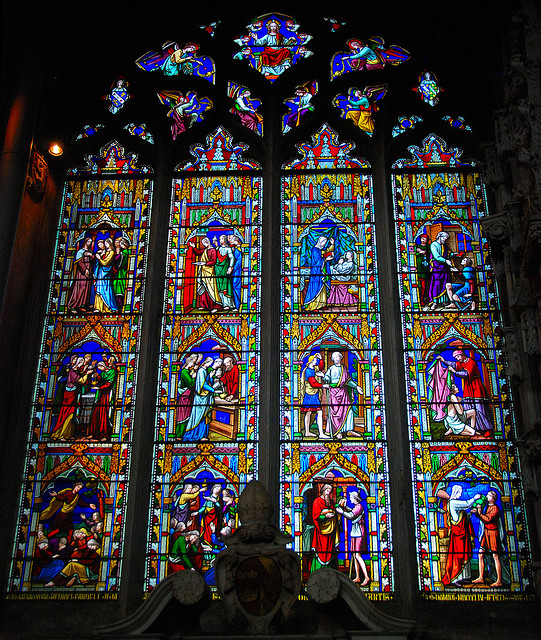 As an atheist who was born Catholic, I’m all too aware of the Catholic Church’s ridiculous no birth control stance. While the U.S. contains far more religiosity in its laws and customs than many of us may realize or admit, politicians and lobbyists often forget one crucial thing. The separation of church and state. But the church continually invades politics and healthcare. And of course attacks reproductive rights.

The U.S. Conference of Catholic Bishops has been doing some hardcore lobbying to Health and Human Services Secretary Kathleen Sebelius to expand a clause in the Affordable Care Act to allow any (that’s right any) religious institution to opt-out of birth control coverage. A fucking “conscience clause.” Lovely.

Is there a conscience clause for Viagara or Cialis? Nope. Cause the Catholic Church, an entity run by old white men, doesn’t care about controlling men’s reproduction. Only women’s.

“You know what violates my religious beliefs? Unjust war. Health insurance that covers Viagra but not abortion. Tax breaks for criminals. Punitive jail sentences for drug addicts who need treatment and counseling. The death penalty. Among many, many other things. But I don’t see anyone calling for me not to have to pay the taxes that pay for any of those things.”

“The thing is though, I don’t remember voting for the Catholic Church to be President of the United States.  Frankly, I don’t even recall seeing them on the ballot.”

It boggles my mind why the hell the Catholic Church thinks it possesses any right to deny healthcare. Shouldn’t medical decisions occur between a patient and their doctor? Absolutely (rhetorical question, folks).

When people control their reproductive health, they lead healthier and happier lives. Contraception is a tool of empowerment. It allows people to take charge of their bodies and sexuality; deciding if and when they want to have children.

Almost all women use birth control. More than 99% of women aged 15–44 who have ever had sexual intercourse have used at least one contraceptive method. Out of the 43 million women who are fertile, sexually active and not looking to get pregnant, 89% use birth control. But birth control affects people from various incomes differently. Denying coverage would strain peoples’ pockets.

If the Obama Administration listens to the bishops, 6 million people would be affected.  It would impact students, teachers, social workers, nurses, admin staff and their families at religiously affiliated schools, universities and hospitals. As Kim Gandy, former NOW President, writes at Ms. Magazine and HERVotes:

“…regardless of the religious beliefs of those employees and students.”

The Catholic Church wants to mandate what they constitute as “morality.” But what about my morality? What about quality healthcare? What about access to abortion and contraception? Gay marriage and adoption? Laws protecting domestic violence survivors? Evolution not creationism taught in schools? Comprehensive sex ed? No, the Catholic Church doesn’t give a shit about that kind of morality.

“It is disturbing.  But it is also completely predictable because it has happened repeatedly. Think Stupak Amendment executive order; think Nelson Amendment to the health care reform bill in the Senate.  Think about the President’s complete 180 on the Hyde Amendment. Think about the HHS regs that voluntarily expanded the denial of coverage of abortion care, applying the Stupak Amendment to exchanges, even though this was not required by law. Think of Obama’s silence in the face of clinic violence and the death of Dr. Tiller.  Think about the continued ab-only money and the fact that our international funding is still going to discredited programs.  I could go on but will stop there because it is all too depressing.”

Um remind me again…don’t we have separation of church and state?! Hopefully Obama remembers that too. Ugh.

This post is part of the HERVotes Blog Carnival: Women v. The Bishops. Sign the petition to ask President Obama to support birth control coverage. Follow the #bcrefusal and #HERVotes tweets.