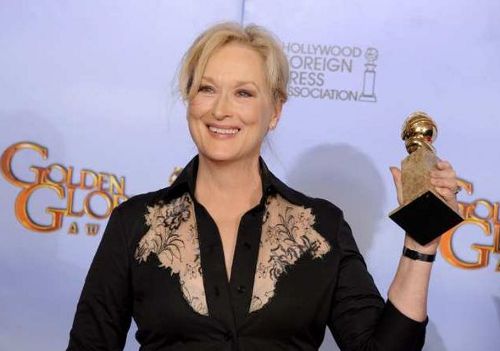 As a feminist blogger and self-proclaimed pop culture aficionado, I watch awards shows looking out for sexism and rooting for women to win awards. The Golden Globes, which aired Sunday night, is rowdy and unpredictable…due to copious amounts of alcohol the actors imbibe. With awards shows, movies, TV series – pretty much everything I watch – I vacillate between moments of elation and fury.

The Golden Globes actually begin with celebs trotting down the red carpet. Now, I love fashion. But such a fine line exists between art and objectification of women’s bodies. Speaking of objectification…Miss Golden Globe…the whole idea, the title….puke. Occasionally there’s a Mr. Golden Globe. But too often a young woman parades around because she’s pretty and a famous actor’s daughter…and…that’s it. Can’t we get rid of this nepotistic nonsense?

In his opening monologue, controversial host Ricky Gervais pitted Kim Kardashian against Kate Middleton (lovely). Then he joked about “not mentioning Jodie Foster’s beaver.” Like her movie “The Beaver.” Funny? Not so much. But it was really funny when he teasingly asked Johnny Depp if he’d seen The Tourist (and Depp shook his head no). Later, Gervais offensively joked about women taking time off to have a child. He declared 2011 a “big year for women.” Okay, sounds better. Oh, but he proceeded to call them “girls.” Gee thanks, Ricky. Way to infantilize women.

Emily Blunt presented the clip of Bridesmaids, nominated for Best Comedy/Musical Film. She said it proved women were funny and could poop…everywhere. Now, I LOVED Bridesmaids. Women are funny. They can be raucous and vulgar. But the film possessed so much better humor beyond shit jokes. Couldn’t we discuss Wiig’s hilariousness or the female camaraderie?? Nope, we’ve gotta talk about the poop.

When it comes to diversity, awards shows usually exist in a sea of white dudes. So it was great to see two people of color, Idris Elba (MLK) and Octavia Spencer (The Help), win awards. AND two actors from ‘The Wire’ (best TV series EVER!), the fantastic Elba and Dominic West, were nominated in the same category. Swoon! But I wish Spencer hadn’t won for playing a maid in a racially-charged film. The Help might have lots of women in it that doesn’t inoculate a film from racism. As @divafeminist tweeted,

“That clip tells you so much about “The Help.” Pretty much began and ended with the voices and images of white women.” 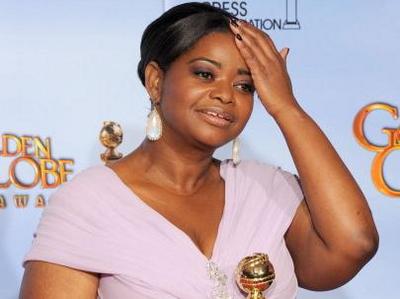 George Clooney made an ableist joke with knee-injured Brad Pitt’s cane. No, Clooney, say it ain’t so! He then made one of the many penis jokes of the night when he said Michael Fassbender could play golf with his enormous penis. Ugh. There were seriously an assload of dick jokes.

But the most horrifying moment belongs to Seth Rogen. As he stood next to co-presenter Kate Beckinsale, he said,

“I am currently trying to conceal a massive erection.”

What the fuck?! Sexual harassment isn’t funny. Whether he uttered the line because it popped into his head or he just read the teleprompter, doesn’t matter. He agreed to say it. Mentioning your genitalia to a co-worker isn’t humor. It’s sexual harassment, douchebag.

But I didn’t spend the entire night pissed off.

One of my fave Golden Globes moments? When they announced the nominees for Best Actress in a TV Comedy. The camera panned to Amy Poehler (who should have won for the most feminist show – Knope 2012!!) and buddy Tina Fey snuck into her shot. Two feminists on-screen!!

Some of the best moments also came from acceptance speeches. Winning for The Beginners, Christopher Plummer thanked his wife of 43 years, “whose bravery and beauty still haunts” him. Michelle Williams, winning for My Week With Marilyn, said, “I consider myself a mother first and an actress second.” It usually irks me when female actors denigrate or downplay their careers for motherhood. But I adored that she thanked her daughter, Matilda:

“…Her bravery and exuberance is the example I take with me to work and in my life.”

Daughters and wives weren’t the only ones thanked. Moms were too. Claire Danes (Homeland) brought her mom as her date. When Peter Dinklage won for Game of Thrones (he’s outstanding), he shared an anecdote about how his mom kept telling him fellow nominee Guy Pearce was so good in Mildred Pierce. He said,

“I love our moms because they keep us humble.”

But the best speeches belonged to Jessica Lange and Meryl Streep. Lange, who won for her bravura performance as an aging, racist (ugh) Southern belle in American Horror Story, said:

“I find it more and more rare, or rarer…to find a piece of work that is really beautifully written and gives you something to do.”

While Lange didn’t specifically say so, I sensed she alluded to the increasing difficulty for women to find complicated roles as they age. The indomitable goddess Streep, who won for her role as divisive leader Margaret Thatcher in The Iron Lady, also broached this topic:

“In a year that saw so many extraordinary performances by women in leading roles …That any one of these performances in any given year would have been a standout award-winning performance but the fact that they all came this year is really, really good news for all of us because sometimes it seems that serious, challenging, weird movies are like exotic birds, rare, extinct birds.”

Streep, a classy and funny lady (who uttered “shit” on live TV…a woman after my own heart!) gave accolades to women in phenomenal roles, off the top of her head since she forgot her glasses and couldn’t read her speech. In addition to Glenn Close, Viola Davis and Mia Wasikowska, she rightfully mentioned Adepero Oduye in Pariah. Best Actress, Director, Film…Pariah should have been nominated for EV-ER-Y-THING! I love that Streep realized it too.

And of course I can’t forget to mention Uggie the dog, who went up onstage when The Artist won Best Dramatic Film…and upstaged everyone.

Thankfully, some feminist themes emerged. But in a year that witnessed numerous outstanding performances by women, can’t our awards shows move beyond condescension, sexual harassment and juvenile dick jokes? Is that really asking too much?