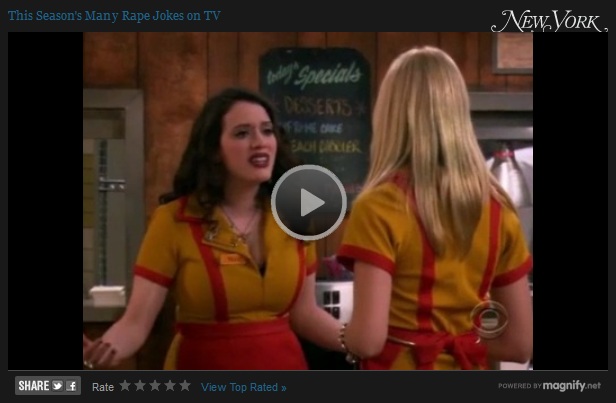 Newsflash, rape jokes are not funny. Ever. So why are so many sitcoms succumbing to them? 2 Broke Girls, Work It, Rob, Whitney, Up All Night, Two and a Half Men, Workaholics, Modern Family, It’s Always Sunny in Philadelphia, Family Guy, Glee, and The Soup (NO, Joel McHale!) have all attempted laughs at the expense of rape.

Rape jokes aren’t edgy. They’re lazy, misogynistic, insensitive and violent. And yet they are everywhere.

“If you go back there, you’ll need a bite guard and a rape guard.”

“Stop fighting it, just give into it. I don’t know why I’m quoting a rapist.”

“Somebody date raped me and I didn’t think I’d live through it. But I did and now I’m stronger and uh, still needy.”

A UFC fighter was fired last year for tweeting a joke on “surprise sex” (cause that’s uber hilarious) from It’s Always Sunny in Philadelphia:

“If a rape van was called a surprise van more women wouldn’t mind going for rides in them. Everyone like surprises.”

Work It, an updated Bosom Buddies cancelled after 2 episodes (thank god!), aired a rape joke within the first 2 minutes of its premiere. Wow, they didn’t waste any time being assholes:

“As a woman, I’m going to have to ask you to stop comparing prostate exams to the pinball scene in The Accused. It’s not okay.”

The Accused is a film about a woman, played by Jodie Foster, gang raped. “The pinball scene?” Yeah, let’s call it what it is…a rape. Comparing a vital physical exam by a consenting adult to rape, a nonconsensual, violent crime is idiotic and horrific. And not funny. At all. Of course this is the same show spewing sexism, racism and transphobia.

A rape joke appears in the TV trailer for the movie Horrible Bosses. In the fucking preview. Jason Sudeikis and Jason Bateman walk down a street when Sudeikis says, “I can’t go to jail. Look at me, I’ll get raped like crazy.” Then Bateman replies, “I’d get raped just as much as you would, Kurt.” “No, no—I know you would.”

Since when did rape become fucking flattery?! Rape is not a compliment. Not ever.

In the movie, when Charlie Day accuses “man-eater” boss Jennifer Aniston of rape she replies, “Just hold on there, Jodie Foster,” alluding to The Accused. Oh, cause it’s so much better when a woman makes a rape joke. Yeah, it’s not.

Lady T at The Funny Feminist discusses rape jokes and female comedians like Sarah Silverman’s infamous and controversial joke: “I was raped by a doctor, which is so bittersweet for a Jewish girl.Jewish girl.” Lady T goes on to write that she hates jokes that imply rape is funny, trivialize rape or makes fun of victims. Yet she can “appreciate jokes that make fun of rapists or rape culture or acknowledge that rape is underreported and terrible.” But since rape jokes can be triggering to survivors, she wonders if it’s even worth it.

Are you as sick of the bombardment of fucking rape jokes as I am??

A few months ago Facebook removed rape joke pages from their site after an outpouring of protests on Change.org and Twitter. Some of the lovely page titles included, “Riding your girlfriend softly, cause you don’t want to wake her up” and “You know she’s playing hard to get when you’re chasing her down an alleyway.” It’s disturbing it took a public outcry to remove them. Who the hell actually thinks these pages are okay to put up in the first place?!

Julianne Escobedo Shepherd at Alternet questions whether rape jokes are ever OK to tell. Regarding their prevalence, she writes:

“The fact that people find these lines fun, or funny, is systematic of our society, where 60 percent of sexual assaults are not reported to police precisely because of the perceived lack of seriousness toward rape (along with stigma and victim-blaming/shaming, among other reasons).”

Rape culture normalizes and accepts sexual violence. Society teaches us men are assertive, having uncontrollable urges (a la “boys will be boys” mentality) and women are passive, their sexuality something to control.

Wanda Sykes is one of the rare comedians broaching the subject of rape with genuine humor. She jokes about the benefits of having a “detachable pussy” so women won’t have to worry about being attacked when they go out jogging late at night. To me this isn’t a rape joke but a humorous commentary on the stupidity of trying to control women’s behavior.

And society is forever trying to control women’s behavior. In her must-read Ebony article, “Stop Telling Women How Not to Get Raped,” Zerlina Maxwell writes:

“For so long all of our energy has been directed at women, teaching them to be more “ladylike” and to not be “promiscuous” to not drink too much or to not wear a skirt. Newsflash: men don’t decide to become rapists because they spot a woman dressed like a video vixen or because a girl has been sexually assertive.

“The culture that allows men to violate women will continue to flourish so long as there is no great social consequence for men who do so.”

Too often, people toss around the word rape or laugh off rape jokes, not fully comprehending the severity of the word or realizing their insensitivity to rape and sexual assault survivors. Rape jokes “dismiss and normalize the idea of rape.”

“Nearly 1 in 5 women in the U.S. has been sexually assaulted.” We live in a rape culture that laughs at rape jokes and too often condones rapists and abusers.  We put the responsibility on rape survivors. We blame their actions and their behavior. Rape is not a sexual act. It’s about power, control and dominating another. People do not asked to be raped and cannot bring rape upon themselves. We need to place the blame where it belongs, with the doucebag creeps who rape and abuse.

In her brilliant “Over It” anti-rape manifesto, activist and playwright Eve Ensler writes:

Rape shouldn’t be a taboo topic to discuss. Survivors shouldn’t be shamed into silence. We need to have open dialogue about sexual assault. While humor can be a great way to confront tough issues, rape jokes trivialize someone’s painful plight.

Like Eve Ensler, I’m so over bullshit rape jokes too.