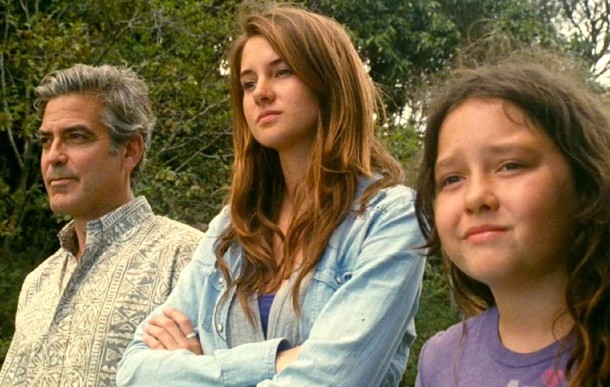 As you’ve probably guessed, I love, love, LOVE movies. The only thing I love more…talking about movies! So does Amber Leab, Bitch Flicks Co-Founder & Editor. So Amber and I decided to post for Bitch Flicks a Review in Conversation of Oscar and Indie Spirit nominated The Descendants.

We discussed how we both liked the film but we were dismayed “it policed and silenced its female characters in the name of its male protagonist, except for one: the teenage Alex” played by Indie Spirit Award Winner Shailene Woodley. We talked about the phenomenal acting, the “Women in Refrigerators” trope, Woodley’s outstanding scene-stealing performance (the underwater scene…omg SO good!), how the best parts were with Alex and/or Scottie, relationships between sisters and mothers and daughters, women stripped of their autonomy (except for Alex), reinforcing white patriarchy (not fatherhood but white privilege and female oppression) and diminishing female characters in a film in order to revolve around a male protagonist.

Here’s an excerpt of our conversation:

Megan (The Opinioness)’s Take:
“That’s what pissed me off about the film: its perspective and commentary on women. Matt bemoans, “What is it about me that makes women in my life want to destroy themselves?” As if the women in his life aren’t struggling with their own demons…it’s all how it affects him…Alex is the only female character allowed autonomy. But all of the women in the film must control their emotions and behavior…While the women have their actions and emotions policed, none of the men do…What message does it send that women, both as children and as adults, must stifle their emotions and urges?”

Amber’s Take:
“Though I haven’t quite figured out what to make of Elizabeth’s mother’s absence-by-Alzheimer’s, the fact that one adult woman was fridged and another imprisoned by dementia shows at best real disinterest in women’s relationships (and hostility at worst). Perhaps the relationship between the two daughters was sidelined for similar ideological purposes…At almost every turn in the film, a woman was not permitted full autonomy. Except for Alex, who was permitted to be a full, complex character. What does it mean for a teenage girl to be the moral center of a story–of this specific story? I haven’t figured it out yet, but it surely doesn’t make up for the indifference and hostility toward the other women.”

Read the entire post, The Descendants: A Review in Conversation, at Bitch Flicks ->