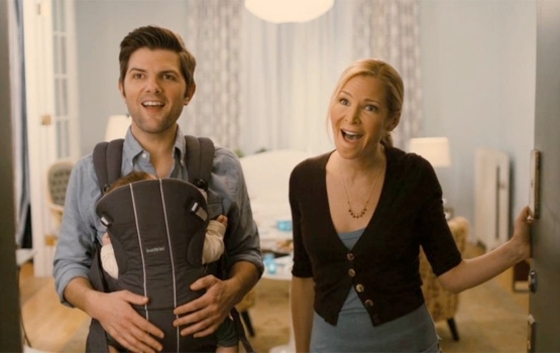 I was deliriously drunk with excitement to see Friends with Kids. I mean, a film starring Kristen Wiig, Maya Rudolph, Jon Hamm AND written and directed by a woman?? And not just any woman but writer Jennifer Westfeldt?! Yes, please!  And yes, it’s funny. Really funny. I laughed so hard my face hurt. Literally. Oh, and of course I cried. It’s not a complete movie-going experience unless I’ve devolved into a sobbing hot mess. But did it live up to my feminist expectations?

Westfeldt plays cheery, talkative and self-deprecating Julie who’s best friends with Jason (Adam Scott) a fantastic loyal friend who happens to be an objectifying womanizer in his dating life. Julie and Jason are the kind of besties who live in the same apartment building, have known each other forever, can finish each other’s sentences and continually debate hypothetical situations such as which is the best way to die.

After their circle of friends (Maya Rudoph, Chris O’Dowd, Kristen Wiig, Jon Hamm) get married and have babies, Julie and Jason witness the decline of spontaneity, romance and apparent happiness in the couples’ lives. Both Julie and Jason want a baby but they don’t want to lose romance. What if they could have a child but skip that part? Why must you have a baby with the same person you’re romantically involved with? And so they decide to have a baby together while remaining platonic friends.

Not only did she star in the film, Westfeldt also wrote, directed and produced Friends with Kids, which also happens to be the first film from Westfeldt and partner Jon Hamm’s production company.  The writing (Westfeldt drew upon her own personal experiences with friends) is sharp, intelligent and witty. The two leads banter with ease. Westfeldt is super likeable and if you adore Scott as Leslie Knope’s adorbs BF Ben Wyatt (um, yes, yes I do!!), you’re going to loooove him here. He’s fricking hilarious. Westfeldt wanted the dinner scenes where all 6 of the friends sit around and talk to echo those in Hannah and Her Sisters. And those feel effortlessly authentic. But don’t let the posters and trailer fool you. If you’re going to see this film because of Wiig, Rudolph and Hamm, you might be disappointed. There’s just not enough of them but maybe I’m greedy.

As the film unfolds, it encompasses shades of light and dark as it explores the characters’ lives. It’s funny yet brutally honest, never pulling any punches about life including babies with explosive diarrhea, stinging spousal arguments and juggling romantic relationships while being a parent. It felt like a raunchier When Harry Met Sally… had a baby with a more mature Sex and the City.

I loved that Friends with Kids showcases different women and mothers at different stages of their lives. We see Leslie (Maya Rudolph) and Alex (Chris O’Dowd) bicker but in a joking and loving union. Leslie’s a loving and supportive friend to Julie, comforting her when she’s down and forever trying to set her up with a man, whether it’s a criminal or a hunky dad (Ed Burns). Sidebar, Julie’s singledom isn’t a death knell, people. There’s nothing wrong with being single! We see a different marriage in Missy (Kristen Wiig) and Ben (Jon Hamm). When they’re newlyweds, they can’t keep their hands off each other. After kids, they’re exasperated and miserable. It’s sad but realistic watching their marriage unravel. Whether she’s uttering a witty quip or evoking her character’s inner turmoil and pain (her scene standing in the window…dagger in the heart), Wiig makes every moment count.

Beyond the three female friends, we also see MJ (Megan Fox), a self-described “gypsy” free spirit dancer openly states she never wants kids. Yet she’s refreshingly never demonized for her choice. We also see Julie’s and Jason’s mothers: one who adores her child and dotes on her grandchild, the other swoops in at the baby’s birth leaving a check and then swoops out again.

Westfeldt’s 3 films that she’s written all tackle relationships from a unique angle differing from the societal norm. The unconventional exploration of parenthood is an intriguing premise. As Westfeldt told Melissa Silverstein at Women and Hollywood:

“…I’ve never understood why things always have to be just one way when I’ve seen so many people in my life struggle tremendously to fit into those boxes or to live up to those expectations or pressures put upon them by whatever society’s concept of ‘normal’ is…I’m frustrated by things that are exclusive to one particular life choice…I think that, in all three of my films, I’ve been trying to explore these different milestones, and the idea that there are a lot of valid ways to live your life and make decisions to find happiness on your own terms.”

I love that Westfeldt questions and explores individual paths to happiness. It’s refreshing to witness Julie and Jason as single parents yet parenting as an egalitarian team. While the friends all outwardly support Julie and Jason, only Alex (the adorbs Chris O’Dowd) actually thinks it’s a great idea. In fact, Julie and Jason’s parenting decision offends Leslie (Rudolph). She believes it’s “insulting” to their “way of life,” “to all normal people who struggle and make sacrifices and make commitments to make a relationship work.” Her teddy bear husband Alex responds with the hilarious line “We’re not Mormons or old-timey people. We don’t exactly have a way of life, babe.” While she pokes fun at everyone, Westfeldt never vilifies married parents or single people. Her film evokes the message that you never know where your choices in life will take you.

As someone in their 30s who isn’t married, doesn’t have kids and doesn’t want kids, I’m always glad to see alternative lifestyles. Although to be honest, the more radical choice would’ve been to depict a childless woman who wants to be childless rather than succumbs to the stereotypical ticking biological clock. But hey, at least we’re seeing a single mother in a favorable light…that’s a huge step. It also would have been great to see greater diversity, such as gay or lesbian parents or more people of color (I mean this is NYC, c’mon!), although I’m glad to see a woman of color (Rudolph) in the film.

While Westfeldt depicts complex female characters, I wish she had delved deeper into the female relationships. Instead, she chooses to focus on the romantic aspect of the comedy. Which is fine of course, in fact that component is quite compelling. And I’m delighted Julie doesn’t wait around for a man or the perfect scenario to lead her life. But as awesome as Friends with Kids is, there’s just not enough lady interaction. No real sisterhood or female bonding.

Considering that Kissing Jessica Stein, Westfeldt’s first screenplay and her breakout role, a wonderful romantic comedy of a straight and bisexual woman who enter a relationship together, passes the Bechdel Test repeatedly, I assumed Friends with Kids would too. But it just barely does. The only times we see two women talking together are when Julie cries to Leslie about Jason dating, when Julie’s mom tells her that she’d love to babysit more, and when Jason introduces MJ to Julie and Julie tells her that she feels like she knows her cause she’s washed her thongs (ha!). In two of those three scenes, women might be talking to women but they’re talking about men. Even one of the most pivotal scenes, a verbal showdown at dinner on a ski trip, happens between Jason and Ben…two dudes.

Why must almost every film, even awesome movies starring and created by amazingly strong and talented women, perpetually revolve around men?

When a film is written and directed by a woman who launched her career on a pretty feminist film, my expectations for her directorial debut are high. Friends with Kids is a touching and hilarious film. And Westfeldt is an incredibly talented writer and director with a knack for capturing nuanced dialogue and raising thought-provoking questions. For a movie created by a woman who believes we should support female filmmakers and women’s voices, I just wish it had been the feminist extravaganza I had hoped and envisioned.

2 thoughts on “‘Friends With Kids:’ Witty & Touching…But Is It a Feminist Extravaganza?”