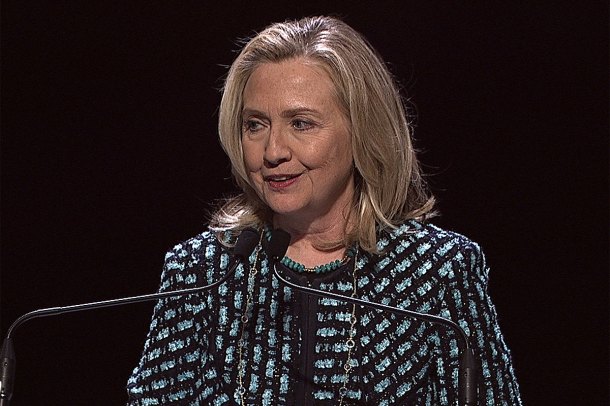 Secretary of State Hillary Clinton delivered the closing remarks at last weekend’s 2012 “Women in the World” Summit. With her effortless (and I’m sure surprising to some) wit, she even poked fun at herself, saying she just hoped Meryl Streep (who introduced her) didn’t star in a movie called “The Devil Wears Pantsuits.” (Sidebar: Ugh, how I loathe how the media constantly critiques and criticizes her looks. Who the hell cares if she wears another fucking pantsuit?!)

Secretary Clinton said her work isn’t so much work but rather a “mission” and how it’s less “strenuous” and far more “inspiring.” She told the audience she has “had the privilege of meeting women who are taking a stand, whose voices are being heard” and who are taking “risks.” She shared stories of powerful, brave women she has met around the globe who have “enriched her life.”

With the Summit entitled “Women in the World,” Secretary Clinton asked:

“So what does it mean to be a Woman in the World?

She talked about the importance of investing in women:

“Nations that invest in women’s employment, health, and education are just more likely to have better outcomes. Their children will be healthier and better educated. And all over the world, we’ve seen what women do when they get involved in helping to bring peace…And that’s why at the State Department, I’ve made women a cornerstone of American foreign policy.”

She discussed the power of choice – in appearance, religion, career, activism and reproductive justice – and how extremists always seek to control women’s behavior and bodies. I cannot tell you how much I love that she called out douchebag extremists who want to dominate and control women:

“…In America, in Tunisia, anywhere in the world, women should have the right to make their own choices. About what they wear, how they worship, the jobs they do, the causes they support – these are choices women have to make for themselves and they are a fundamental test of democracy…

“Why extremists always focus on women remains a mystery to me. But they all seem to.

She discussed the power of choice and how women must shape their own lives:

“Yes, it is hard to believe but even here at home we have to stand up for women’s rights and reject efforts to marginalize any one of us because America needs to set an example for the entire world. And it seems clear to me that to do that we have to live our own values and we have to defend our own values. We need to respect each other, empower all our citizens and find common ground.

“We are living in what I call the age of participation. Economic, political and technological changes have empowered people everywhere to shape their own destinies in ways previous generations could never have imagined.

“All these women, these women in the world have proven that committed individuals often with help, help from their friends, can make a difference in their own lives and far beyond.”

She ended her rousing speech with a challenge and a call to action for us all to be “fearless”:

“Every one of us needs to be part of the solution. Each of us must truly be a Woman in the World. We need to be as fearless as the women whose stories you have applauded, as committed as the dissidents and the activists you have heard from, as audacious as those who start movements for peace when all seems lost.”

Words cannot express how much I love this woman. We need more powerful, outspoken, fearless leaders like her who stand up for women’s rights.

4 thoughts on “Secretary Hillary Clinton On Extremists Controlling Women, the Power of Choice and Calling On Women to Be ‘Fearless’”