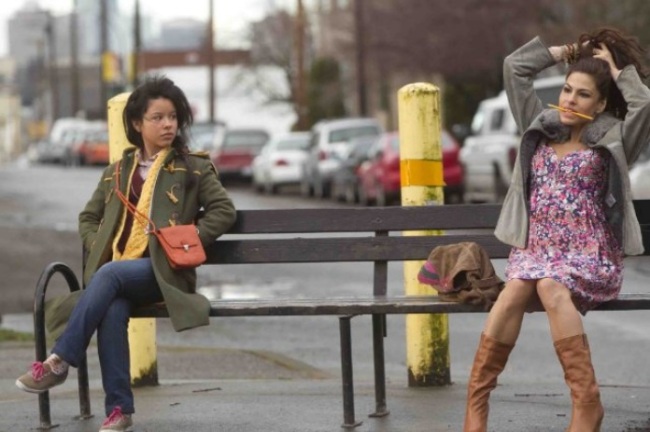 When I was growing up, I never felt like a child. With her continuous string of bad boyfriends, I always felt like I was the one taking care of my single mother and myself. I couldn’t wait to leave home and start a new life. So I can relate to the female-centric film Girl in Progress, which tackles navigating adolescence and strained mother-daughter relationships.

Directed by Patricia Riggen (La Misma Luna aka Under the Same Moon) and written by Hiram Martinez, Girl in Progress features Eva Mendes as Grace, a struggling single mom. After reading coming-of-age books in school, her teen daughter Ansiedad (whose name means “anxiety”) decides to take a “shortcut to adulthood” and stage her own coming-of-age story. Ansiedad strives to forge her identity and chart her own course in the world.

Wait, a film focusing on women or girls? Directed by a woman? With women of color as characters?? Yes, yes and yes!

Vivacious, flawed and cavalier, single mom Grace left home after having Ansiedad at 17. Working two jobs, she struggles to pay the bills, including Ansiedad’s expensive private school tuition. Grace often seems like a big kid herself — eating all the cereal, misplacing money, forgetting to buy shampoo. She tries her best but it’s very clear early on she has no clue how to be a mother to her precocious teen.

Played by newcomer Cierra Ramirez, Ansiedad is smart, perceptive, sarcastic and self-aware. She takes care of her mother, doing chores while her mom plays dress up in her bedroom. When her mom passes out after coming home late with her married boyfriend, Ansiedad carefully takes her shoes off. She knows (and tells) her mom she has terrible taste in men. She pushes her mom to pursue her dreams and go back to school. The roles have reversed. Even at her young age, Ansiedad is the responsible one, begrudgingly mothering her mom.

Exasperated by her childhood, Ansiedad decides it’s time to move on and grow up. But in order to do that, she believes she must reach certain milestones first. With the help of her best friend Tavita (scene-stealing Raini Rodriguez), Ansiedad plots her coming-of-age — winning the chess tournament, becoming rebellious, drinking, transitioning from a “good girl” to a “bad girl,” having sex for the first time — all so she can leave the mantle of girlhood behind.

Through her appearance, Ansiedad tries out various identities — nerdy, Hot Topic-esque punk, quirky preppy — all in an effort to find herself. Butterflies are a common symbol throughout the film, a metaphor for Ansiedad’s metamorphosis from girlhood. She yearns to grow up and escape her disappointing mother, who fails to give her the guidance and support she so desperately craves.

There’s a subplot of Tavita struggling with her weight. When Ansiedad tries to fit in with the cool girls, she betrays her best friend, cruelly taunting her weight. Later Tavita swallows diet pills in an effort to conform to thinness. A huge part of adolescence, a negative body image paralyzes many girls’ self-esteem. I just wish the message “you’re beautiful the way you are” rang louder.

Beyond scenes of fat-shaming and slut-shaming, the jarring utterance of the R word made me cringe. Granted, teens say assloads of inappropriate and offensive things. But no one corrects them. There’s also a horrific “joke” about domestic violence (WTF??). Grace’s boss tells one of her co-workers she can’t be a restaurant manager because her husband beats her (someone seriously laughed at that in my theatre). He later tells Grace the server quit because she had a “fight with her stairs.” I’m not sure if the filmmakers were trying to convey characters’ douchebaggery or if they just thought ableism and abuse were funny. Newsflash, they’re not. Either way, the issues are treated nonchalantly, never given the exploration they truly need.

The film feels choppy as it vacillates between humorous moments of clarity along with bittersweet earnestness and stumbles of forced melodrama and clunky acting by some of the supporting cast. Despite the missteps and histrionics, moments of brilliance shine through. The opening scene, Ansiedad’s class presentation in which she shares her mother’s mistakes was funny and captivating. I adored Ansiedad and Tavita’s camaraderie. Mendes gave a great performance as the immature mom. But hands down, the absolute best moments in the film belonged to the fantastic Rodriguez. Her nuanced portrayal of a teen finding her way mesmerized and captivated.

With several Latina characters, the Girl in Progress effortlessly weaves class and ethnicity throughout the story. Ansiedad’s mother struggles to make ends meet while Tavita lives in a mansion with her mom sipping cocktails. Riggens said she liked setting the film in Seattle (filmed in Vancouver) as it’s not a border state or city, where most movies with Latinas take place.

One of the best scenes occurs between Grace and Ms. Armstrong (Patricia Arquette), Ansiedad’s English teacher. Ms. Armstrong tells Grace that Ansiedad is planning to run away and force herself into adulthood. We see race and class dynamics subtly play out as Grace believes the white educated teacher judges her and lack of education. In their exchange, we witness Grace’s insecurities about not finishing school and how her mother didn’t provide her with needed support. While we feel the sting of Ansiedad’s understandable resentment towards her mother, Grace’s ineptitude isn’t demonized. Rather we begin to understand she failed to receive support from her mother too. Grace just doesn’t realize she’s replicating the same toxic pattern of neglect with her own daughter.

Ansiedad desperately tries to take a different path than her mother. But she realizes (interestingly when she mimics her mother’s hairstyle in a scene), that she’s shadowing her mother, reenacting the same shitty mistakes. But with a feel-good ending wrapped up too neat and tidy, the resolution of Grace and Ansiedad’s mother-daughter dynamic felt inauthentic. It was like, “Why are you never here for me?!” “Okay I’ll be here for you.” Ta-dah…the end! Wait, what??

I wished Girl in Progress delved deeper, exploring the role reversal and tangled relationship between Grace and Ansiedad. It does however perfectly capture that frustrating push pull of adolescence — the desire to want your mother to support and be proud of you yet the simultaneous craving for independence and freedom.

With women only comprising 33% of speaking roles and even fewer films featuring women of color, we desperately need to see and hear more diverse women’s voices behind the camera and on-screen. Riggens said Girl in Progress “is really about females, about women” of all ages. Repeatedly passing the Bechdel Test, the movie isn’t about Grace’s search for love or Ansiedad finding a father figure. Despite a number of male characters, they exist peripherally; the women and girls take center stage. Ultimately, Ansiedad realizes her mother truly loves her. She also discovers the value of female friendship, something we don’t nearly see often enough in film.

No matter how nurturing, mother-daughter relationships are often fraught with tension, a complicated web of emotions. To this day, I still grapple with issues surrounding my mother, as many of us do. But Girl in Progress reminds us adulthood isn’t a destination. Rather it’s an ongoing journey where we (hopefully) continually evolve and grow.