Mothers are supposed to be everything to everyone. Sadly, society often stigmatizes, vilifies and demonizes single mothers. Single moms are blamed for “breeding more criminals.” Single parenthood is criminalized and “declared child abuse.” On top of that, “almost 70% of people believe single women raising children on their own is bad for society.” WTF? Seriously?? Wow. Way to be misogynistic people.

So it’s no surprise to see broken and dysfunctional single moms reflected on-screen. And don’t get me wrong. I love watching flawed female characters. But what about single mom Sarah Connor, “the mother of destiny?” Often labeled a feminist hero, topping lists for greatest female characters, is she the “ultimate protective single mother?”

Along with Ellen Ripley, Sarah paved the way for strong female characters. In Terminator, Sarah (Linda Hamilton) is a friendly college student and food server, lacking confidence, who “can’t even balance [her] checkbook.” Targeted by cyborg assassins sent from the future to kill her son, the future resistance leader fighting against domineering machines, she is thrust into a hellish nightmare fighting for her life. The Sarah (Linda Hamilton) of Terminator 2: Judgment Day transforms into a badass goddess. With her sculpted muscles doing pull-ups and firing guns, she’s a ferocious warrior filled with rage (something women are rarely allowed to exhibit) yet haunted and struggling with mental stability. In the cancelled-way-too-early fantastic TV series Sarah Connor Chronicles, we witness Sarah (Lena Headey) as a brave single mother, passionate, smart, angry and flawed, doing everything she can to not only survive but thrive.

As kickass as she is, Sarah possesses no other identity beyond motherhood. She exists solely to protect her John from assassination or humanity will be wiped out. Every decision, every choice she makes, is to protect her son. In Sarah Connor Chronicles, Cameron tells Sarah that “Without John, your life has no purpose.” Sarah tells her ex-fiancé that she’s not trying to change her fate but change John’s. Even before she becomes a mother in Terminator, her identity is tied to her uterus and her capacity for motherhood.

Now, I realize she’s saving the world, trying to keep her son alive and stop a cyborg onslaught. But the underlying theme — motherhood must consume women — is troublesome. Mothers don’t have to squelch their desires and sacrifice their identity and entire lives in order to be a “good” mother.

Succumbing to the Mystical Pregnancy Trope with the father of her baby coming from the future, Sarah’s pregnancy and birth of her son eerily parallels the Virgin Mary and the birth of Christ. A woman who gives birth to a messianic son. Kyle Reese (Sarah’s time-traveling love and baby daddy) tells Sarah she’s revered in the future as a warrior and strategist, for raising and teaching her son John to be a leader and the world’s salvation. So not only is she John Connor’s mother. Sarah transcends her role becoming the mother of humanity.

While not sexualized, Sarah is still defined by her relationship to the men in her life. In the films, there are no women for her to interact with, aside from her roommate Ginger and a female guard at the institution. One of my favorite components of Sarah Connor Chronicles is that we’re introduced to several strong, complex women. Sarah is forced to work with Terminator-reprogrammed-protector Cameron (Summer Glau) whom she distrusts. Of course Cameron isn’t even human. But she takes the form of a teen girl so people she encounters treat her accordingly. While I love the series, it can’t go unnoticed that rather than showcase female camaraderie, the series pits its two female leads against one another — a common media theme — essentially competing for John’s trust.

Single mothers are often portrayed as reckless, promiscuous or damaged. Or the trifecta jackpot…all 3! As competent and fierce as Sarah is, she’s still portrayed as mentally unstable in Terminator 2. Suffering from PTSD, she’s terrorized by nightmares and flashbacks. Sarah’s trauma is never truly discussed as if it’s something she needs to snap out of or shake off. She’s often calmed down and reined in by John. Now, as a child raised by an emotionally unstable single mother, I understand this dynamic. And of course if someone told me I was going to give birth to humanity’s savior, that machines were coming to kill me and then machines did…yeah, I might lose my shit too.

Throughout T2, Sarah’s humanity erodes as she becomes more and more cold and calculated like a machine. Her emotional journey and breakthrough — balancing her fierce survival instincts with her humanity — doesn’t transpire until her son stops her from killing an innocent man and she crumbles, breaking down in tears. Was Sarah’s state of mind depicted to convey her character’s complexity? Or was it to show John’s strength and resolve at such an early age? Either way, it’s her motherhood that essentially conjures her transformation.

A theme throughout the Terminator films and series is “child-rearing divides our attention, making us less fit for heroism.” At the start of Terminator 2, Sarah’s actions cause her to lose custody of John as he’s raised in foster homes. In Sarah Connor Chronicles, she struggles to balance her duties as a nurturing single mom to John and her role as a soldier trying to alter the course of history. In the series, she’s the one reminding John and Cameron about what they’re fighting for: the value and beauty of humanity.

While I always love seeing fierce ladies kick ass, punching a foe or firing a gun isn’t synonymous with strength. Many people believe women in action films promote empowerment and equality. But in reality, most female action heroes in film don’t shatter gender stereotypes. They rarely lead as heroes, usually serving as love interests and props to the male protagonist. Ultimately, most female film characters succumb to stereotypical gender roles.

Of the few truly empowered female characters in action films, most (Sarah Connor, Ripley, The Bride/Beatrix Kiddo) are lioness mothers. Linking violence “with the archetype of protectress,” these women risk everything to save their children. But women who are assertive, intelligent, complicated, self-reliant survivors (like Sarah) exhibit empowerment, whether they strap on a gun or not.

Patriarchy presents itself as a constant threat. Like Alien’s Ripley, Sarah constantly tries to assert her agency and is stifled. Both women try to convince the men around them that threats — murderous robots and acid-bleeding aliens — are real. Yet no one heeds their warnings. In T2, when talking to Miles Dyson, the scientist responsible for the creation of Skynet, Sarah talks about the threat of patriarchy and the salvation of motherhood:

“Fucking men like you built the hydrogen bomb. Men like you thought it up. You think you’re so creative. You don’t know what it’s like to really create something; to create a life; to feel it growing inside you. All you know how to create is death…and destruction…”

Sarah designates a gender binary implying that women create and men destroy, reifying the gender roles of women as caretakers and men as conquerors. Yet she herself straddles that line — a nurturing, protective mother utilizing violence as a freedom-fighting soldier to save her son and the planet.

Of course, everything John Connor learned can be attributed to his mother’s resilience and ingenuity. And that’s awesome. While I love Sarah Connor every bit now as I did when I was 10, I can’t help shaking my unease that just like the majority of films in Hollywood echoing society’s views, a woman is supposed to sacrifice everything for a man. Even her son. 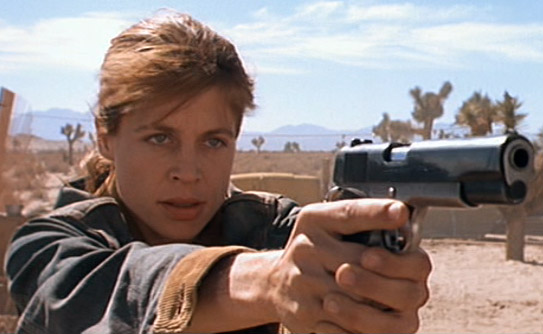 On the surface, it seems like the Terminator franchise revolves around a dude often searching for a father figure rather than appreciating his mother. And problematic depictions of motherhood do emerge. But who’s really the hero? Is it the smart hacker son destined to be a leader? Is it the cyborg that learns humanity? Or is it the brave and fierce single mother who sacrifices everything to protect humanity and doesn’t wait for destiny to unfold but takes matters into her own hands?

Ultimately, the Terminator story is an allegory of single mothers in today’s world. Whether juggling jobs to pay the rent, balancing the demands of work and raising a child, or battling cyborgs — Sarah crystallizes the sacrifices and struggles single moms endure in a patriarchal society to ensure a better life for their children.

Single mothers aren’t vilified in the Terminator saga, they’re admired and celebrated. If that’s not feminist, I don’t know what is.