Originally published at Bitch Flicks as part of their Women in Politics in Film & TV Week.

When I grow up, I want to be Leslie Knope. It’s no secret I love Parks and Rec. A female-fronted series with a hilarious ensemble cast that’s the most feminist show on TV? C’mon, how could I not? It’s easy to write off Parks and Rec as a quirky and brilliant comedy. Yet it’s so much more than that. It broke ground revealing the highs and lows of political office and showing an intelligent, upbeat, passionate woman can not only run for office but win.

Inspired by The Wire’s portrayal of politics (another reason to love it even more!), it depicts local government in the small town Pawnee, revolving around the indomitable Leslie Knope. Amy Poehler (who happens to be one of my fave feminist celebs) anchors the show with her fantastic portrayal of the waffles-loving leader.

With Leslie Knope’s win, women and girls see that women can become leaders. She helps normalize the image of female politicians, showing us that it’s not strange — rather it’s routine — for a woman to strive for political office. She allows us to dream of impacting change through politics. She tells us that it’s okay for women to be powerful.

Always striving to empower women and girls, Leslie started Camp Athena, a program for teen girls and the gender-bending Pawnee Goddesses, an originally all-girls (and later co-ed) girl scouts-esque group. When judging a beauty pageant, Leslie brilliantly brought “her own laminated scorecard with categories including “Knowledge of herstory” and “The Naomi Wolf factor.” She started “Galentine’s Day” for her lady friends to celebrate each other and how they don’t need men. Forever dreaming of running for office, Leslie idolizes strong women leaders posting pictures of Hillary Rodham Clinton, Madeline Albright, Condoleezza Rice, Janet Reno, and Nancy Pelosi. Leslie aspires to become the first female president of the United States. Did I mention she constructed a Geraldine Ferraro action figure? From a popsicle stick?? Priceless.

Parks and Rec continues the lady power by revolving around a female friendship. Creators Greg Daniels and Michael Schur conceived the show to focus on Leslie and Ann Perkins’ friendship.Fitting as Amy Poehler and Rashida Jones are real-life friends. In an age where you see women catty and backbiting towards one another or the Smurfette principle with only one woman in the cast, it’s great to see several women who not only get along but support one another’s goals.

But Parks and Rec skyrocketed into the feminist stratosphere when it featured Leslie’s decision to run for city council, her campaign and her win.

In “I’m Leslie Knope,” Leslie declares, “I’ve been dreaming of running for public office my whole life.” While other girls played with Barbies, Leslie had her trusty Geraldine Ferraro action figure (I cannot express just how much I love this).Leslie makes campaign speeches in her sleep and declares her campaign slogan “Knope We Can’t Not,” a hilarious riffs on President Obama’s slogan. We see Leslie participate in the usual campaign tasks such as field and GOTV (get out the vote), fundraising and debating. And her position on Egyptian debt relief.

Leslie chooses her career over a man…twice. In season 2, when she’s dating Louis C.K., he asks Leslie to move with him but she decides to stay in Pawnee for her career. Then in season 4’s premiere, Leslie must choose whether or not to break up with adorbs Ben in order to pursue her dream of running for office. And she chooses her career. We so rarely see this on TV. It’s so refreshing for a woman to put her work and herself first instead of a man. 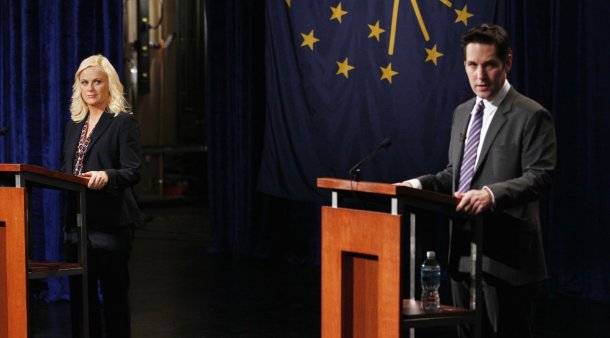 Leslie had to contend with her campaign manager leaving after she came forward with her relationship with Ben Wyatt, dirty spin tactics and even a smear campaign as she was accused of killing puppies (???) when the animal shelter closed due to her negotiation reallocating funds for the Parks Department. Each of these issues is dealt with humorously (duh). What’s surprising is that in a strange way — with its illustration of the hurdles women face and can overcome — Parks and Rec’s portrayal of Leslie Knope’s campaign might just be the most honest depiction of a campaign ever.

When Leslie responds to the lewd photos sent to all the female city hall workers, she tells reporter Perd Hapley, “When men in government behave this way, they betray the public’s trust. Maybe it’s time for more women to be in charge.”

Yes, yes it is time.

I was thrilled we had not one but two women running for office! Claire’s campaign for city council mostly took a back seat, only appearing in 3 episodes. And she lost. Although it was great to see her run at all. But Leslie’s campaign remained the crux of the 4th season.Hopefully, when we see more women leaders run for elected office on-screen, we’ll see more women running for off-screen.

There is a chasm, a massive gender gap in politics. Far less women run for office far less than men.  In 2011, only 16.6% of women serve in the House and only 17% of women in the Senate. At the state level, only 23.5% of legislators are women and only 21.8% of women hold elective executive positions, including only 6 female governors. When you look at the numbers for women of color, only 27% of the 16.6% who serve in Congress are women of color with no women of color in the Senate. Amongst statewide politicians, 20% of the women serving as state legislators and 15.9% of those serving in statewide elective executive positions are women of color.

For several years, I worked at a women’s center at Harvard University, coordinating a political training program for female grad students. Female political candidates face unique challenges and obstacles. Some women are reticent to run because they worry about fundraising (many women have no problem asking for money as activists yet have trouble when it comes to asking for money for themselves) and facing sexism in the media and the ridiculous scrutiny on their appearance. Women often have to be asked to run for office whereas men just run. Women often perceive that they need more training, more experience, regardless of their actual qualifications.

But I think there’s another reason women don’t run.

You can’t be what you can’t see. If little girls don’t see any female politicians in the media — in books, film and TV — it becomes that much harder for them to envision themselves as leaders or even knowing that politics is a potential path. If no politicians look like you — although having Hillary Clinton run for president and Sarah Palin as a Vice Presidential candidate certainly helped — it’s extremely difficult to imagine you can lead.

We need even more women to run for office, advocating for greater equity. Women must fight harder to prove themselves and their worth, due to their small numbers and societal expectations. Female politicians often submit more legislation and tend to advocate more for abortion, education and healthcare. They see the world from a different vantage point than men. When women sit at the table of the decision-making process, a greater diversity of voices and perspectives are heard.

Women overwhelmingly won this record-breaking election. With 20 women in the Senate and at least 77 women in the House, a historic number of women will serve in Congress. It will be the most diverse Congress in history. Additionally, with President Obama’s re-election, gay marriage passed in 4 states, and an anti-abortion amendment failing in Florida — all these successes struck a massive blow to the GOP’s onslaught of attacks against women, gay rights and reproductive rights.And I think feminist humor played a small yet vital role in the 2012 elections, spreading awareness about inequality.

As we’ve already seen in her brief term as City Councillor, Leslie has advocated for clean parks, passed a soda tax and fought back against abstinence-only education. As Diane Shipley points out in her must-read Bitch Flicks article on Leslie Knope:

“Leslie Knope *is* amazing. Over the course of three seasons, she’s gone from a small-time, small-town government employee with delusions of grandeur to someone it’s easy to believe could make a big splash on the larger political stage one day. I hope she does, and I hope we get to see it. What’s more, the popularity of her character signals an important change, a backlash against the backlash: the mainstream acceptance of a heroine who lives by feminist values and encourages others to do the same.”

Looking at the two comedies featuring women in political office on right now, Veep satirizes government, mocking politicians and their staff’s incompetency. While Julia Louis-Dreyfus and the rest of the ensemble are hilarious, I sometimes cringe as I want to see a woman in a position of power succeed. But with Leslie, you never doubt for one moment she can’t do exactly what she sets out to accomplish. And you never doubt she will stand up for women everywhere.

We need to see more depictions of women politicians. With Parks and Rec, not only do we see that women can and do run for office, but they can win. Leslie shows us that women can confidently follow their dreams and turn them into reality. As my friend and fellow writer Molly McCaffrey said to me:

“Watching Leslie win felt like a victory for not only women but people who care about the world.”

Now if only we had more Leslie Knopes in the world. With women and girls watching, we just might.