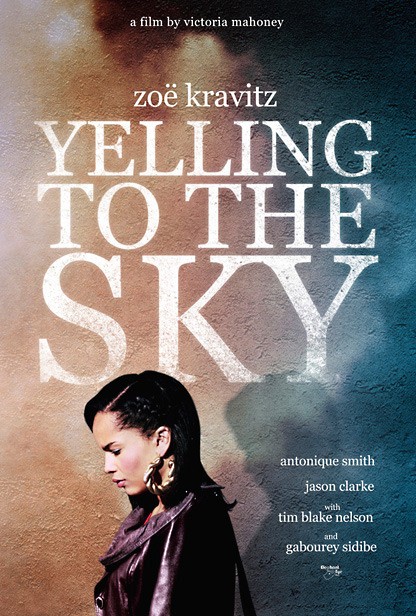 Originally published at Bitch Flicks as part of Women of Color in Film and TV Week.

Yelling to the Sky struck a visceral chord with me. I related to it in a way I often don’t with films. I’m not a biracial woman growing up impoverished, who turns to selling drugs as a means of survival. But I grew up with an absent father and a single mother struggling with mental illness, feeling trapped by my surroundings, desperate to break free.

All the actors give stellar performances in this emotionally raw and gritty film. Zoe Kravitz in particular captivates with a nuanced, powerful performance as the smart, struggling Sweetness O’Hara, trying to survive in a whirlwind of turmoil. Sweetness and her older sister live in a troubled home with unstable, unreliable parents: their white father, an alcoholic and their African-American mother who suffers from mental illness.

Yelling to the Sky opens with a jarring scene. Sweetness is getting bullied and beaten up in the street by her classmates. Latonya (Gabourey Sidibe) taunts her for the lightness of her skin and her biracial heritage – briefly raising complex issues of race and colorism. But she’s rescued by her older sister Ola (Antonique Smith in a scene-stealing powerhouse performance) who we see, as the camera eventually pans out, is very pregnant. This juxtaposition of a brawling pregnant woman, a fiercely protective sister, makes an interesting commentary on our expectations of gender.

Sweetness’ unpredictable father Gordon (Jason Clarke) vacillates between affectionate charisma and volatile violence and rage. He verbally and physically abuses every woman in the household. He tries to make amends for his deplorable parenting later in the film. But since he’s caused so much trauma, it might be too late for forgiveness.

Unfortunately, we never really learn about Sweetness’ mother Lorene (Yolanda Ross) who seems numbed by medication and/or depression beyond Sweetness asking if she was hospitalized in a mental institution when she “went away.” I wish the film had explored more of their relationship.

While I was disappointed the film didn’t explore mother-daughter relationships, it does show the bonds of sisterhood. The relationship between Sweetness and Ola is my favorite part of the film. We see the girls joke, play, challenge and comfort one another. Both rely on one other for support. Ola leaves home to live with her boyfriend, leaving Sweetness to fend for herself alone. But she’s not the only one trapped. Months later, Ola must return home with her baby, now a single mother. Her dreams of escape nothing but nebulous memories.

Yelling to the Sky is a searing portrayal of one girl’s pain. Of her frustration at being confined and trapped in a world not her choosing. Sweetness doesn’t focus on her education or her future. She deals with the immediacy of her pain. She starts selling drugs as a way to make money. She numbs herself with drugs, alcohol and surrounding herself with a cadre of bullies and drug dealers. Sweetness desperately yearns to escape. But where to? Where can she go?

Mahoney said she wanted to evoke feelings of claustrophobia when Sweetness spent time at home. And she succeeds beautifully. You feel just as trapped as Sweetness, chained by loneliness, fear and desperation. When she’s out in the streets, it feels frenetic with drunken stupors, drive-by shootings and drug deals gone wrong.

Is the film perfect? No it definitely falters at times. I wish we had learned more about each of the characters. It feels very much like a snapshot, a voyeuristic peek through the window into their messy and complicated lives. Just when you’re lured in, the window abruptly closes. But the biggest flaw? I wish it had more deeply explored the issue of race without resorting to stereotypes.

A painful history of colorism and skin shade hierarchy — dark vs. light skin — exists amongst black women. When the media portrays black women, we often see women with lighter skin, straighter hair and more Caucasian features. Both L’Oreal and Elle photoshopped black to make their skin appear much lighter. The media often whitewashes black women, continually perpetuating the unachievable attainment of the white ideal of beauty. “The myth of black beauty” and the preference for lighter black skin can be traced back to slavery.

While light-skinned biracial and black women possess privilege, they may also face a backlash and be deemed not “black enough.” While the jarring opening scene of Yelling to the Sky certainly alludes to this, it is never explored further. Instead, the film resorts to racial stereotypes: “dark(er)-skinned black people are mean and like to victimize light(er)-skinned black people,” “girls/teenagers/women who are “authentically” black are bad” and “interracial relationships are dysfunctional.”

I cringed seeing Sidibe depicted as the dark-skinned, mean, overweight bully terrorizing a lighter-skinned petite girl. When the roles reverse and Sweetness beats the shit out of Latonya, I get the sense that it should feel like vindication for her earlier torment. But it feels empty and hollow. But maybe that’s the point, that retribution and violence are empty and hollow. As this is a semi-autobiographical film, perhaps these circumstances transpired in writer/director Victoria Mahoney’s own life, especially as she’s a biracial woman. But as these racial stereotypes occur over and over in media, it would have been great to have them deconstructed or not appear at all.

We don’t see enough female protagonists, women of color in film or female filmmakers of color. We don’t see enough films exploring issues of gender and race. And we should. In an interview, Mahoney (a promising new filmmaker who is certainly one to watch) shared her inspiration for the film:

“Stemming from my teenage obsession with Chekov’s Three Sisters and a connection to the theme of “manufacturing illusions in order to sustain day to day life.” I related on a gut level to the notion of joy and opportunity, existing elsewhere while in the same breadth knowing it was a lie. The illusion of “one day it’ll be different” is what kept me alive and smashing that illusion might’ve been my death. Putting this film out is important because (yet another generation of) young people are facing the exact same isolation, confusion, neglect, inquiry, desire, and heartache. All these years later, there’s little to no progress or solution. Adults have become freakishly focused on ‘self’, so much so, that we’re failing our responsibilities to participate and aid in the development and advancement of young people’s spiritual and intellectual growth.”

This is what I related to and why – despite its flaws – I’m so thankful for Yelling to the Sky. I may be a white woman and I may not have made the same choices Sweetness made, but it showed me I wasn’t alone. It felt cathartic watching.

My childhood existed of treacherous terrain to navigate. My mother was preoccupied by her own problems. I never knew what I was walking into when I went home. So I focused on the future. I clung to the hope that one day things would be different. That was the sole reason I survived. It’s the one thing that kept me going. While my mind was fixated on the future, my actions were grounded in the present. Like Sweetness, I skipped classes and almost didn’t graduate high school for I wanted to numb my pain. It’s this delicate dance of present angst and future hopes that Mahoney captures so well.

Sure, some people may find Yelling to the Sky bleak or hopeless. It’s heartbreaking to watch Sweetness spiral out of control. Sweetness clamors to escape, to break free. Yet there’s nowhere to go. Echoing real-life, the film ends with ambiguity and uncertainty. You don’t know how her life will turn out. Sweetness’ story – her struggle to survive amidst the chaos swirling around her, desperate to cling to any semblance of community – is one worth telling. And it’s one we don’t see often enough.