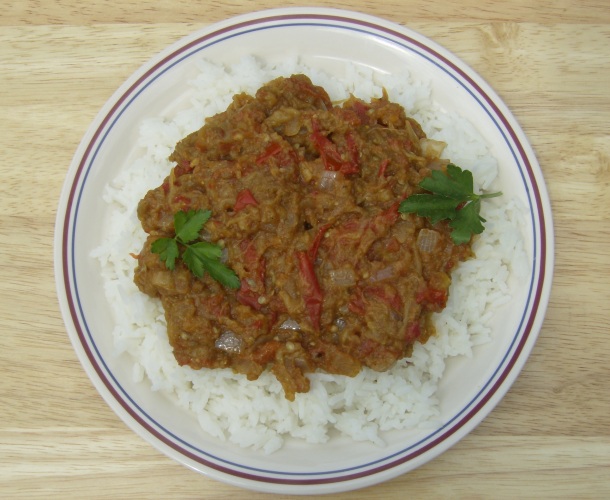 Happy Meat-Free Monday!  I love being an epicurean adventurer and trying different delicacies.  One of my favorite ethnic cuisines is Indian food.  I adore the rich textures and seductive spices.  I’ve been watching and rooting for the adorable Aarti, a competitor who whips up mouth-watering Indian food on The Next Food Network Star.  As a result, I keep craving my fave Indian dish of all, Baingan Bharta or mashed eggplant.  Whenever I visit an Indian restaurant, chances are this is what I’m ordering off of the menu.

As I just purchased my first Indian cookbook, The Indian Vegan Kitchen by Madhu Gadia, I thought it would be fab to cook my fave recipe, particularly as eggplant is currently in season.  You can either grill or bake the eggplant, which gives it a robust smoky flavor.

People are often intimidated by preparing Indian cuisine.  As this recipe contains spices and ingredients at any grocery store and there’s very little prep, this is a relatively easy entrée into preparing more intricate Indian delicacies.  I hope you’ll join me in being an explorer…the Jacques Cousteau, the Amelia Earhart, the Amerigo Vespucci (you get the idea!) of cuisine in the comfort of your own home.

1) The eggplant can be grilled or baked in the oven (I baked it in the oven).  Preheat grill or oven to 450 degrees.  If grilling, grill the eggplant on high heat for 20 to 30 minutes, turning periodically.  If baking, lightly oil the eggplant, place in an oven-safe tray and bake for 30 to 35 minutes, turning once or twice.  CAUTION: watch the eggplant as it gets close to the end so it doesn’t explode (not kidding, this happened to mine!)  The skin of the eggplant will darken to brown.

2) Place eggplant in a bowl and cover for 10 to 15 minutes.  Once the eggplant is cool enough to handle, slowly remove the skin, scraping all eggplant pulp from the skin.  Keep all the juices that come out too.  Discard the skin.  Mash the pulp with a potato masher or fork and set aside.  You should have approximately 1 cup of pulp.

3) Heat oil in a nonstick skillet over medium-high heat.  Add onion and cumin and cook 2 to 3 minutes until golden brown.  Add tomatoes and cayenne pepper.  Cover and cook for 2 to 3 minutes.  Mash the tomatoes with a potato masher or the back of a spoon, making a sauce-like consistency.  Stir in coriander, fennel seed powder and salt.

4) Stirring in a folding motion, add the mashed eggplant.  Reduce heat and cook for 5 to 7 minutes, stirring occasionally, until the eggplant becomes shiny as oil rises to the top.

5) Transfer to a serving container and serve hot with flatbread or over basmati or jasmine rice.