The exquisite Chanel jackets…the lush Prada bags…the sexy Jimmy Choo shoes…I love watching the movie The Devil Wears Prada; getting lost in the eye candy whirlwind of NYC and high fashion.  Like many people, flipping through the glossy pages of fashion magazines excites yet soothes me; it’s escapist fun.  But I also know that there’s a darker side to fashion…fur.  So I was eager to see the new film Skin Trade, a documentary that confronts the controversial topic of fur in the fashion industry.  But I was also apprehensive as I’ve seen the horrific footage out there regarding animal cruelty.  So I steeled myself; ready to plunge into the activist world. 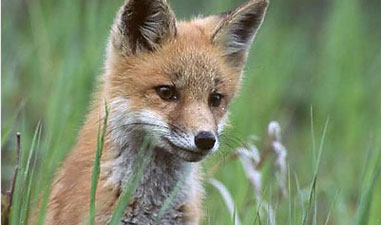 Director and co-writer Shannon Keith spoke with the Elephant Journal about her impetus for making the documentary:

“I wanted to make a film about an issue that is winnable for us. If we can end the fur trade, it will be one big step towards ending animal cruelty. No one can argue there’s any good reason for fur.” 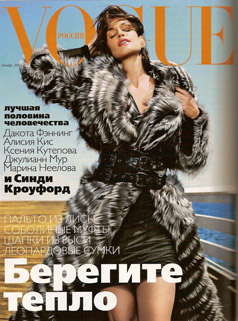 I completely agree with Keith, as do many animal lovers, that there’s no need for fur.  However, some consumers proudly wear fur coats and fur-trimmed clothing.  If you pick up a copy of Vogue magazine, you see fur dominating the fashion world.  So designers must be behind the fur fad, right? Not quite.  Jessica Szabo, a pet columnist, author and former fashion journalist, states in the film,

“Everyone naturally assumes fashion designers are the ones who are dictating the trends and calling the shots in terms of what people wear.  But the reality is it’s the editors of the top fashion magazines who are doing this.  And that’s because they are having to put out month after month, a magazine, a book, images that are supposed to draw the reader in and want to make them be a part of the lifestyle portrayed…”

Some have deemed Anna Wintour, editor of Vogue, “the most powerful woman in the U.S.” In the documentary The September Issue, Wintour said, “There’s always a way to wear fur.”  She has also said, “Vogue is there to report on the fashion industry. Fur is part of fashion and we will continue to report on it as long as that is the case.” But is it that cut and dry?  No.  The Cruella de Vil of fashion feigns that she bends to the will of the fashion gods.  But what she fails to acknowledge is that fashion and beauty editors like herself make the demands on designers, determining what images will grace the glossy covers and spreads.  Wintour decrees what designers will create.  As publisher Tom Florio said, “Nobody was wearing fur until Anna put it on the cover in the ‘90s.”

Now of course designers share responsibility as they could choose not to use fur in their lines.  Mainstream designers like Stella McCartney, Mark Bouwer, Calvin Klein, Todd Oldham and Ralph Lauren do not use fur.  And some companies like Overstock.com have stopped selling fur or any fur products, turning away vendors who do sell fur.  This season, fashion powerhouses Karl Lagerfeld for Chanel, Marc Jacobs and Anna Sui all created faux fur collections for the Fall ’10 runway.  So if designers can create beautiful faux fur fashions, why do people still don fur?

Fur is a status symbol of excessive wealth, luxury, prestige and power.  Joshua Katcher of the vegan food and fashion website The Discerning Brute asserted, “Wearing the fur coat says you have power, literally over the animal.”  Rory Freedman, author of the vegan diet book Skinny Bitch said in the film,

“I think people are still wearing fur because they’re seeing these Hollywood types and celebrity types wearing them.  Unfortunately, our culture really looks to these people to set the tone.”

Freedman is right.  In our celeb-obsessed culture, we look to actors and musicians as to what’s hip and trendy.  And many celebs like Jennifer Lopez, Sharon Stone, Eva Longoria, Kanye West and the Olsen twins flaunt furs as a status symbol.  Yet many other celebs like Alicia Silverstone, Pam Anderson, Drew Barrymore, Alec Baldwin, Eva Mendes, Persia White and Pink protest the cruel and inhumane industry by posing for PETA’s ads such as the “I’d Rather Go Naked Than Wear Fur” campaign.

But there are many myths surrounding the making of fur and treatment of the animals.  There’s no regulation in fur trades and inspectors don’t visit the farms to maintain humane treatment.  The Canadian Fur Council perpetrates the myth that fur is eco-friendly.  But the vast amounts of toxic chemicals in fur prevent decomposition, make it far from green.  As environmental attorney Jan Schlictmann, of A Civil Action fame, states in the film,

“Saying fur is green is like saying toxic sludge is good for you…There’s no way of getting around the fact, the process of tanning requires huge amounts of water and chemicals, metals, dyes, solvents, acids; there’s just no easy way to de-flesh these things, to de-fur to remove the furs from the skins.”

Another tactic of smoke and mirrors is the blatant mislabeling of fur origin.  Keith interviewed Representative Jim Moran (D-VA) regarding the legislative bill HR 2480 “Truth in Fur Labeling Act.” Many people buy faux fur thinking it’s a humane option.  Unfortunately, much of the faux fur out there trimmed on coats, vests, hats, etc. isn’t even fake at all.  Rather, it comes from dogs and cats in China where there are absolutely no animal regulations whatsoever (although there aren’t many here in the U.S. either).  But the kicker is that if an item is under $150, a company doesn’t have to label the fur ingredients.  So if you bought a winter coat under $150 with a faux fur trim, you probably bought something with real fur in it anyways.  The passage of HR 2480 would force companies to reveal the true origins of fur and faux fur.  Unfortunately, the bill was recently sent to a committee, which is the death knell of a bill.

What Skin Trade does well is in focusing on how the editors mandate fashion trends and the blatant lies in labeling.  I also like that Shannon Keith, the film’s vegan director, appears in the film.  Otherwise, it makes it seem as if an omnipotent force has created the film.  All film creators have bias; it’s nice to see what a documentary maker’s is upfront.  I also adored the sassy Joshua Katcher and his on-the-street candid conversations with women wearing fur which were not only informative in providing people’s perspectives who are pro-fur but also hilarious and provided much-needed levity.

But I found the soundtrack (the 80s called and wanted their music back) and the cutesy animation sequences distracting.  It feels as if Keith wrangled up some of her friends and taped them.  Erik Mayer, a “historian” who appears in the film certainly doesn’t appear to be an expert as a quick Google search showed that he isn’t affiliated with any universities, think tanks, non-profits or advocacy groups.  Instead, he oversees an online magazine with courses and papers, none of which are footnoted, contain a bibliography or have an academic tone.  Keith could have turned to Eric Jay Dolin, PhD who just released his book Fur, Fortune and Empire: The Epic History of the Fur Trade in America.  In the film, Mayer states that Ben Franklin started the fur coat craze by wearing a full length bear coat to France.  However, not to get technical but he actually wore a fur hat.  And women in France, at least the aristocracy, wore fur-lined clothing centuries earlier.  Small inaccuracies like this can derail an otherwise fantastic documentary.

Regardless, Keith’s vital and urgent message needs to be heard.  She told the website The Vegan Police,

“My thought was that if I could make a mainstream film with celebrity representatives, I just might be able to actually reach those who make the decisions in the fashion world, and change the face of fashion to a more compassionate one.”

If Keith wanted to change people’s minds about fur, I’m not sure this was the best route to traverse.  I keep thinking about the intended audience.  Who will watch who isn’t already an animal activist, a vegan or someone opposed to fur?  Will some of them even watch due to the graphic content?  The film depicts horrific clips of raccoons being slammed into the ground, foxes caught in traps, anal electrocution, animals’ necks breaking, clubbed seals and animals’ fur being peeled off their bodies.  The film is a deluge of nightmarish cruelty.  I had to keep stopping the film as it was almost unbearable to watch.

The horrific, gory and gut-wrenching scenes may never be viewed by those who actually need to see them: fur purchasers, fur salons, fashion designers or fashion editors.  However, we as consumers wield the power of purchase; to refuse to perpetuate this cycle of cruelty.  So ladies (and gents), the next time you see a fab coat in a boutique window or on a department store rack, just remember you don’t need to be an activist to purchase something else.  You’ll look even more fabulous without the fur.

12 thoughts on “The Devil Wears Fur (and Prada): Documentary ‘Skin Trade’ Exposes the Truth about Fur in the Fashion Industry”