As I previously posted, I spent last week in NYC. I told you all briefly what I’d be doing so you wouldn’t think I had run away.  Well now I’m ready to debrief and discuss the details of Soapbox Feminist Winter Term 2011, a week-long workshop run by activists Jennifer Baumgardner and Amy Richards.  Each day was categorized by a theme of meetings with non-profits and panels of speakers…and of course networking with fab feminists.  So I’m going to write a post for each day.  It’ll be like you were there with me, except for the whole meeting famous feminists part of course!

Monday, the first day of Feminist Winter Term began with brunch at Amy Richards’ house.  For those of you who don’t know (and you should dammit, she ROCKS!), Amy Richards is a feminist activist and the co-author, along with my other icon Jennifer Baumgardner, of Manifesta and Grassroots.  It was so surreal being in Amy’s house, shaking Jennifer’s hand and having Amy put her arm on my shoulder, asking me if I wanted something to drink.  They are two of the sweetest and most supportive, nurturing and genuine people I’ve ever met.  Some people may get star-struck over stupid celebs like Justin Bieber, Jennifer Aniston or Brad Pitt.  Me? I get star-struck for feminists!

There were 26 participants, including me, there to soak up every ounce of inspiration and activism we could get our hands on.  We went around the room, introducing ourselves, saying where we came from and sharing our “click” moment when we realized we were a feminist.  People hailed from around the country and Canada too.  Some were undergrads, some grads and a couple like me who were out of school.  My story is a long, meandering one (for those of you who know me, that comes as NO surprise!).  I relayed parts of this story on my blog’s “About” page, but not in its entirety.  A fusion of the story I shared with my Feminist Winter Termers and thoughts that coalesced later on, here is my journey to calling myself a feminist…

I had always been an opinionated, mouthy girl, never afraid to express what was on my mind.  I had also been pro-choice, pro-LGBTQ rights and an animal rights supporter for as long as I can remember.  I knew about sex from the age of 3 (not kidding…I freaked out my grandmother when I said that I knew where babies came from…a penis and a vagina…well, that IS where they come from!) and I suppose I thought that if women didn’t want to be pregnant, they shouldn’t be forced to remain that way.  Basically, I believed in freedom: freedom of choice and freedom from harm.

As a young girl, I played with hyper-feminine Barbie dolls.  At my best friend’s house, I played with pseudo-masculine G.I. Joe “action figures” (ahem, dolls!) and Matchbox cars.  I was pissed off when my mom would only buy me the girly toys like Barbies, My Little Pony and She-Ra, but not He-Man or Tonka trucks.  I often read books with feisty female protagonists like Anne of Green Gables, Island of the Blue Dolphins, Little Women and From the Mixed-Up Files of Mrs. Basil E. Frankweiler.  But I also read books with boys like Encyclopedia Brown and Tales of a Fourth Grade Nothing.  Apparently, I didn’t care about exhibiting feminine or masculine traits…I just wanted to be me. 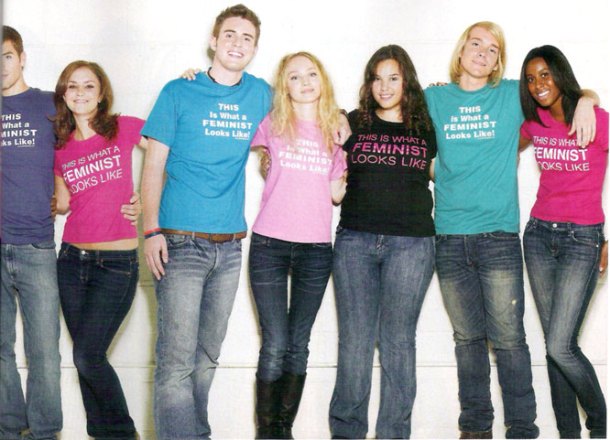 Fascinated by gender and culture, I majored in Anthropology and Sociology in college, taking courses on gender and sexuality.  Coming from a divorced home, gender roles and women’s independence intrigued me.  Yet I still didn’t call myself a feminist.  In one of my classes, my professor asked a class of 40 students, “Who here calls themselves a feminist?”  No one raised their hand.  When she asked why, I stated, “I’m not a feminist but (ah the infamous ‘I’m not a feminist but…’ tagline) I believe in women’s economic and reproductive rights.  Women have the right to choose an abortion, people in the LGBTQ community shouldn’t be treated any differently than a heteronormative couple and women should receive equal pay.  But I’m not a feminist.”  Despite my support for all of those feminist causes, I didn’t like the term feminist because I believed in equality, not that women were above men.

I continued to take gender classes and read works by bell hooks, Margaret Atwood, Eve Ensler, Simone de Beauvoir, Sojourner Truth, Mary Wollstonecraft, Don Kulick, Lila Abu-Lughod, Jennifer Baumgardner and Amy Richards.  Despite any missteps in the movement, and every social justice movement suffers from mistakes, I eventually realized that feminism wasn’t about anyone being above or better than anyone else.  It was about equal treatment.  As bell hooks put it,

“Feminism is a movement to end sexism, sexist exploitation, and oppression.”

I realized that I espoused these feminist beliefs yet refrained from calling myself one.  It seemed oddly hypocritical to me, masquerading as a feminist while not saying the actual word.  I finally started calling myself a feminist…and it was one of the best decisions I ever made.

Now I know not everyone shares my sentiments.  Some people know they’re a feminist early on while others, like me, take some time to embrace that identity.  Still others will never call themselves one and that’s cool too.  To me, actions matter far more than titles; what you believe speaks volumes as to who you are as a person.  Women are not automatically feminists and men and transgender individuals can be feminists too; your beliefs and actions make you a feminist, not your gender.  One of my friends told me that I shouldn’t call myself a feminist and be reduced to a label.  While the word “feminist” certainly comes loaded with positive and negative connotations, depending on who you talk to, aligning with that identity wasn’t about boxing me in.  Rather it was about proudly declaring who I was to the world.

Stay tuned for the next post on Soapbox Feminist Winter Term 2011!

5 thoughts on “This is What a Feminist Looks Like: Discussing Our Journey to Feminism at Soapbox Feminist Winter Term – Day 1”