As the film freak/pop culture junky that I am, I try to watch all awards shows.  The Oscars, SAGs, Tonys, Emmys…I’m addicted to them all so of course I watched the Golden Globes on Sunday night.  I mean drunk celebs on a live awards show?!  Sign me up!  And while many recaps focused on the fashion and Ricky Gervais’ blunt, brutal humor, the highlight for me was Chris Colfer’s acceptance speech when he won Best Supporting Actor for Glee.

In his speech, Colfer (who may be my new idol) dedicated his award to:

“…But most importantly, to all the amazing kids that watch our show and the kids that our show celebrates who are constantly told no by the people in their environments, by bullies at school that they can’t be who they are or have what they want because of who they are.  Well, screw that, kids.”

Colfer gave a heartfelt salute to tolerance and being true to yourself, a particularly important lesson in light of bullying and LGBTQ suicides.  I was reminded by my trip a couple of weeks ago when I visited the Tolerance Museum in NYC, which contains galleries and interactive displays on genocide, racism, intolerance and hate speech.  Also, as most people have, I’ve been consumed with U.S. Representative Gabrielle Giffords (D-8th) and the Arizona shooting tragedy.  So what do all of these seemingly disparate topics have to with one another?  Am I suffering from conversational ADD?  Perhaps.  But my thoughts on Rep. Giffords, hate speech and Colfer’s rousing words of acceptance coalesce as I believe these are all connected.  I knew I wanted to write about this tragedy but I wasn’t sure how as so many others have written far more eloquently on the topic than I have.  But it’s important for all of us to examine and discuss.

So did gender and misogyny factor into the shooting?  As Rep. Giffords is the youngest woman in Congress and women comprise only 17% of Congress as it is, I couldn’t help but wonder.  Feminist blogger, writer, co-creator of Feministing and all-around kick-ass feminist icon Jessica Valenti argued that gender played an important role in the Giffords shooting.  In an article for the Guardian, Valenti talks about the vengeful hatred spewed by Sharron Angle and Sarah Palin, the fear conservatives have to be viewed as feminine and the dangers of “manning up” and hyper-masculinity:

“What’s not being discussed, however, is that a fair amount of this violent language and imagery is coming from female politicians on the right… it doesn’t seem unlikely that conservative female politicians feel the need to peddle their ideas in gendered and violent language in order to fit in with the masculinised right…In a country that sees masculinity – especially violent masculinity – as the ideal, it’s no wonder that this type of language resonates. But it’s a sad state of affairs when women in politics have to resort to using the same gendered stereotypes that kept all women out of public service for so long.”

Amanda Marcotte, blogger at Pandagon echoed Valenti’s sentiments on gender as a factor:

“Gender is an issue with this specific shooting.  Just as you can’t claim that shooting a congressperson and a judge at a political event is a non-political event, you can’t really just pretend there aren’t gender implications to a young man shooting one of the sadly too few women in Congress.”

“At a small local branch of a major bank, for example, the tellers would have their fingers on the alarm button whenever they saw him [Loughner] approaching.  It was not just his appearance — the pale shaved head and eyebrows that unnerved them. It was also the aggressive, often sexist things that he said, including asserting that women should not be allowed to hold positions of power or authority…One individual with knowledge of the situation said Mr. Loughner once got into a dispute with a female branch employee after she told him that a request of his would violate bank policy. He brusquely challenged the woman, telling her that she should not have any power.”

Looking at it from a societal standpoint, Irin Carmon at Jezebel raised the issues of domestic violence, rape and sexual assault; how these aren’t isolated incidents but rather symptomatic of a larger misogynistic problem. Here are some disturbing stats on violence against women in the U.S.: 1 in 6 women will be sexually assaulted in her life, 1 in 4 women will face domestic violence in her lifetime, and 1 out of 12 women will be stalked in her lifetime.  Sadly, we live in a “rape culture” that condones sexism and violence against women.  We’re bombarded with hate speech, violent rhetoric and misogynistic language and images which fuse together forming a toxic concoction.

Now, I’m a staunch supporter of freedom of speech.  I vehemently disagree with people wanting to censor rock/rap music, gory films or violent videogames, attributing it as a cause to kids’ destructive behavior.  While it can contribute to aggression, I don’t think censorship is the answer.  But hate speech crosses the line from merely expressing your thoughts to inciting violence.  I’m reminded of Dr. Tiller’s assassination in 2009.  I was appalled at how anti-choice groups posted “wanted” posters of abortion providers, yet shirked responsibility when Scott Roeder committed murder.  Bill O’Reilly condemned Tiller as running a “death mill,” equating him with Nazis and Al-Qaeda and said he had “blood on his hands.” Yet he says his words did not incite violence.  Yes, you CAN say anything you want; but that doesn’t mean you should.

Similar circumstances arose when Sarah Palin posted on her site a “Take Back the 20” image complete with bulls-eye gun sight marks on the politicians she felt should be targeted due to their support of the healthcare bill. Rep. Giffords happened to be one of the elected officials Palin targeted.  After Giffords had been shot, the image was swiftly removed from the site.  Rebecca Mansour, a SarahPAC staffer, responding to the usage of gun imagery said in an interview, “We never ever, ever intended it to be gun sights.” Right.  A fucking card-carrying member of the NRA never thought it would have any affinity to guns.  Sarah Palin herself infamously responded to the accusations and denied any wrong-doing in her “blood libel” (really?! Oh, here go hell come) speech:

“But, especially within hours of a tragedy unfolding, journalists and pundits should not manufacture a blood libel that serves only to incite the very hatred and violence that they purport to condemn. That, is reprehensible. There are those who claim political rhetoric is to blame for the despicable act of this deranged apparently apolitical criminal. And they claim political debate has somehow gotten more heated just recently. But when was it less heated? Back in those clam days when political figures literally settled their differences with dueling pistols?…As I said, while campaigning for others last March in Arizona during a very heated primary race, I said we know violence isn’t the answer, when we take up our arms, we’re talking about our vote.”

It’s easier for Palin to point fingers, passing the blame onto the media rather than admit culpability.  Yet prior to her attack, Rep. Giffords herself worried about the ramifications of Palin’s actions and words. In an MSNBC interview, Giffords said,

“For example, we’re on Sarah Palin’s targeted list, but the thing is, that the way that she has it depicted has the crosshairs of a gun sight over our district. When people do that, they have to realize that there are consequences to that action.”

Sadly, Giffords and the 6 other victims killed and 12 injured suffered for Palin’s malevolent and vitriolic actions.  The misogynistic douchebag shooter, Jared Loughner, must be held accountable.  There will always be psychopaths who don’t need any excuse to incite violence.  But Palin should also take responsibility for the role she played in this tragedy.  Frank Rich wrote in the NY Times that at least 3 other politicians faced threats after Palin’s bulls-eye image.  She “hates violence” yet has no problem killing animals on TV or inciting hate speech towards her opponents.  Sarah Palin is no fucking pacifist.  Okay, rant over. 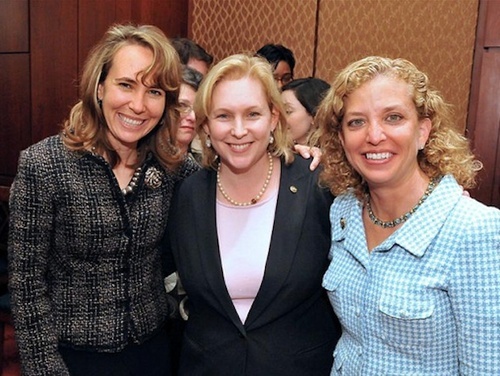 Luckily, Gabrielle Giffords is now recovering and even standing up.  When she awoke from her coma, she was surrounded by loved ones, including strong, kick-ass women.   But we still must contend with a culture spewing hate.  When President Obama (who declared January National Stalking Awareness Month AND whom I frakking heart…I don’t care what anyone says) addressed the nation several nights days ago, he implored,

“These men and women remind us that heroism is found is not only on the fields of battle…Let’s use this occasion to explore our moral imaginations…That we can question each others’ ideas without questioning each others’ love of country…They believe & I believe we can be better.”

We CAN imagine better, we can be better.  Our world chokes on the stench of sexism, racism, homophobia and intolerance.  But imagining a better world doesn’t have to remain a nebulous dream.  We can and should make it a reality for our sisters, mothers, spouses, grandfathers, daughters, uncles, partners, friends…for ourselves.