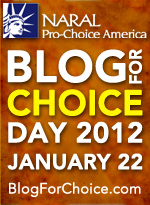 39 years ago today, in 1973, Roe v. Wade passed legalizing abortion. Almost 4 decades have passed but the abortion battle rages on, our rights still under attack.

In 2011, the House voted on choice-related legislation 8 times, more than twice as much in any of the previous 5 years. The House passed H.R. 3, which restricts abortion, introduces rape and abortion audits, and originally intended to redefine rape, and H.R. 358, the “Let Women Die Act” which not only attacks birth control but allows a “conscience clause” for hospitals and doctors from performing abortions even if the woman’s life is in danger.

Each one of the Republican Presidential nominees – Mitt Romney, Newt Gingrich, Rick Santorum and Ron Paul – is anti-choice. Make no mistake, each one of them puts the rights of a fetus above an individual’s choices for their own body. While the Obama administration did approve near-universal contraception coverage (yay!!), the administration hasn’t been pro-choice supportive on issues such as emergency contraception and overturning the heinous Hyde Amendment.

Roughly 1 in 3 women will have an abortion in her lifetime. Women in the military don’t have insurance coverage to fund abortions. Abortion restrictions, particularly due to the Hyde Amendment, place an unfair burden on low-income women and women of color. Women of all races, ethnicities, classes and incomes should be able to have their rights protected. People need to determine their reproductive choices without being encumbered by fiscal constraints, restrictive laws or extremism.  With unsafe abortions on the rise globally, we can’t afford to let anti-choicers strip our reproductive rights away.

It never ceases to amaze me how some anti-choice conservatives care so much about zygotes and fetuses but don’t give two shits about social welfare programs, reproductive freedom and women’s equality. Nope, they would rather demonize uteruses and vaginas.

In the documentary, Gloria: In Her Own Words, feminist icon Gloria Steinem, who had an abortion herself, shared how the issue of abortion rights catalyzed her becoming a feminist. As a journalist, she covered an abortion hearing in New York in 1969. She said:

“Women were standing up and sharing their abortion experiences. I listened to these women testify about all that they had to go through, the injury, the danger, the infection, the sexual humiliation, you know to get an illegal abortion. And I suddenly realized why is it a secret, you know?

“If 1 in 3 women has needed an abortion in her lifetime in this country, why is it a secret and why is it criminal and why is it dangerous? And that was the big click. It transformed me and I began to seek out everything I could find on what was then the burgeoning women’s movement.”

When the government tries to take away your reproductive rights, to make choices about your own body, you realize how vital it becomes to speak up and fight for your rights.

Last year, I attended a Planned Parenthood rally, Walk for Choice to protest anti-choice legislation, SlutWalk to protest rape culture, and Daily Show co-creator Lizz Winstead’s Tour for Planned Parenthood. I blogged for Blog for Choice Day, the “My Planned Parenthood” blog carnival, the birth control “We’ve Got You Covered” blog carnival, and CLPP’s From Abortion Rights to Social Justice Conference at Hampshire College. What do I plan to do in 2012? Fundraise for the Eastern Massachusetts Abortion (EMA) Fund and keep writing about abortion rights and reproductive justice.

Our bodies have become a battleground. My mother never thought she would ever see Roe v. Wade threatened. But that day has come. Have we entered the fucking Dark Ages?! How is it that in this day and age we debate whether or not a fertilized egg is a person? Why do people think they can tell someone what to do with their own body?

We can make a difference.  Call or write your legislator. Vote. Blog, tweet or post articles on Facebook.  Donate money or your time to an abortion fund, clinic, non-profit or lobby. Rally your friends and family. We must continue to take a stand and make our voices heard.

I don’t know how we got here. But I know I’m not going down without a fight. What will you do to protect reproductive rights?

One thought on ““Blog for Choice Day:” On the 39th Anniversary of Roe v. Wade, Abortion Rights Still Under Attack”