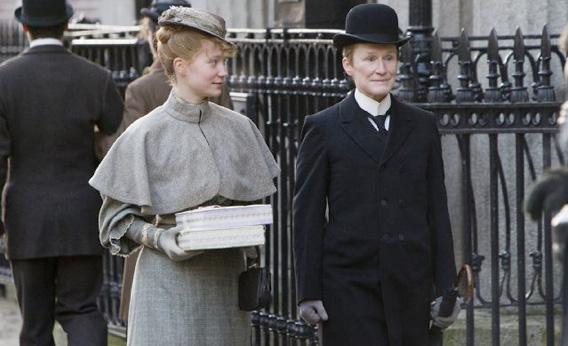 “You don’t have to be anything but what you are.” Hubert Page (Janet McTeer) tells the titular Albert Nobbs played by Glenn Close. But in a time where women possessed no status, no rights – when your only options were as a wife, servant or prostitute – how could you be yourself if you yearned for another life?

Haunting and sad, Albert Nobbs tells the tale of a woman who disguises herself as a man in order to survive in 19th Century Ireland. A “labor of love” and a “dream fulfilled,” Oscar nominee Glenn Close, who co-wrote the screenplay, tried to get Albert Nobbs made into a film for 30 years. Adapted from the play, which Close starred in on Broadway in 1982, is itself adapted from George Moore’s short story. Moore’s books were controversial “because of his willingness to tackle such issues as prostitution, extramarital sex and lesbianism.” Rodrigo Garcia’s poignant film Nine Lives, which Close also appeared in, showcasing 9 vignettes of women’s lives, is one of my favorite films. So my expectations were high for Albert Nobbs.

Was this a “jaw-dropping performance” by Glenn Close? She was absolutely outstanding. I didn’t realize at first just how good of a job she did until I realized I completely forgot that it was Glenn Close! I’m used to seeing her play strong, confident or assertive women. Here, Close plays a character shy, awkward, guarded and desperately lonely. She melts into the role. She’s as straight-laced and tightly wound as the prim and proper world around her.

It might be easy to initially dismiss Close’s performance as merely donning make-up and male garb, forever sporting a stoically immutable countenance. But Close completely lets go in Albert’s few aching outbursts of emotion. With a child-like naïveté, Close played Albert as an “homage to Charlie Chaplin.” About the role, she said:

“Albert was particularly tricky because there’s always the question of how much should show on her face because a lot of it is somebody who’s totally shut down, who doesn’t even look people in the eye. Servants weren’t supposed to look people in the eye, but she’s an invisible person in an invisible job. And then her whole evolution is slowly being able to look up – the first time she really looks someone in the face is after she’s told Hubert her story and then she kind of looks out to her dream.” 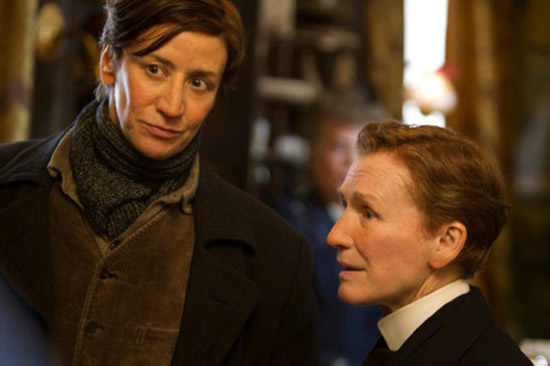 Albert’s world begins to change after she meets outgoing house painter, Hubert Page (McTeer). In her well-deserved Oscar-nominated role, Janet McTeer exquisitely steals every scene. Hands down, she’s the absolute best part of the film. I couldn’t wait until her magnetic presence appeared on-screen again. McTeer, who plays the qualities of the character, not the gender, exudes a soulful swagger and charismatic kindness. She radiates confidence, warmth and a bold assertiveness. McTeer, also playing a woman in disguise, possesses a strong sense of self, the complete polar opposite to Albert who has no idea who she is as a person. About her character, McTeer said:

“I tried to be, on the one hand, very male, by which I mean large and expansive and confident and sitting on the back of the heels, as it were, and on the other hand I wanted [my character] Hubert to have as many as what we consider to be the loveliest of the female qualities — empathy, compassion, kindness. I wanted Hubert to be a really good mixture of both.”

It’s the embodiment of these qualities that makes Hubert unique. But we also see this mélange in Albert. Helen tells Albert, “You’re the strangest man I’ve ever met.” What makes Albert so strange? Is it that she treats women with thoughtfulness, kindness and equity stereotypically lacking from the other men Helen met?

After Albert meets Hubert, she realizes she could have a life of companionship. SPOILER -> Hubert is married to a woman she adores and a beautiful scene between the two portray a tender, loving and devoted couple. <- END SPOILER Hubert gives Albert hope for a different future: a life free from the shackles and confines of loneliness. In a bittersweet scene, Hubert and Albert walk along the beach together. Albert in a dress, the first she’s worn in 30 years, runs along the beach. Reminded of her old identity, in a rare expression of emotion, she’s unconstricted, buoyed by freedom and sheer joy.

Many movies contain cross-dressing plotlines for comedic effect. But not a lot exist that focus on gender-bending from a dramatic angle. Boys Don’t Cry and Transamerica explore the lives of a trans man and woman while Yentl and The Ballad of Little Jo both echo Albert Nobbs as they feature women who choose to live as men in order to survive or pursue their dreams. An act of violence as a young girl catalyzes Albert to live as a man to protect herself and survive.

Critics have focused on the gender components in the film. But an equally important theme, class threads throughout the entire film. Albert Nobbs depicts how women contended with and endured poverty. We witness the stark dichotomy between the lavishly wealthy clients and the servile wait staff in the hotel. Servants in the Victorian Era were to be invisible, never looking the upper class in the eye. With her downcast eyes, Albert remains dutiful. Yet she begins to aspire for more. Albert has been saving her money all her life and hopes to open a shop of her own.

The film portrays relationships and courtship as an economic contract. When Albert courts the coquettish Helen (Mia Wasikowska), Helen expects and asks for all sorts of gifts and trinkets. SPOILER -> We also see class play out after Helen gets pregnant. Women needed men in order to survive financially. Women who give birth to children out of wedlock were punished fiscally, fired from their jobs. Husbands provided fiscal security. <- END SPOILER Gender and class coalesce. You realize Helen’s gender and station in life condemn her situation. Albert and Hubert would never be able to attain their dreams (and Hubert her independence) had they retained their identity as women.

I perpetually worry audiences watch period films with dangerously confining gender roles and then sit back thinking, “Phew, we’ve come so far!” Yeah, no, we so haven’t. Albert Nobbs raises so many thought-provoking questions. Why is the male gender the more “desirable” gender in society? What does it say about a society where half its population has a mere two options for their lives? How can women take charge of their own lives amidst confining gender norms? And therein lies my problem with the film. It provides no conclusions, the answers remain elusive.

It’s a slow and unassuming movie that at times moves at a methodical pace. But the more I pondered, the more I realized the film possessed many intricate layers. Throughout we see women’s perspectives and hear women’s voices. Albert Nobbs contains not one but two powerful female actors with other women in memorable supporting roles; a film rarity. Neither Albert or Hubert are defined by their gender or sexuality. They both transcend gender.

The tragic story of Albert Nobbs lingered in my memory long after I left the theatre. Its exploration of female friendship, lesbian love, class and poverty, gender roles and a woman’s self-discovery, truly make it a rare gem.