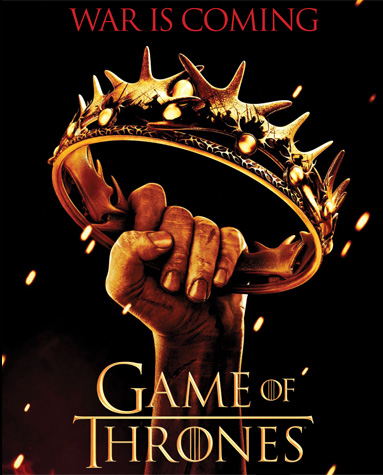 Tonight (4/1) is a ridiculously busy night. Not only does Season 2 of The Killing premiere…not only is there a new episode of Mad Men…but Game of Thrones Season 2 premieres too!!! New episodes of 3 of my favorite TV shows?? I can barely contain my excitement!!

Based on the best-selling A Song of Fire and Ice series penned by fantasy author George R.R. Martin , Game of Thrones is a medieval fantasy where kings, queens, lords, ladies, warriors, knights, servants, priests, priestesses and prostitutes all play a role in a political battle of wills, vying for control of the Iron Throne.

The Season 1 finale saw the Seven Kingdoms of Westeros in a tumultuous upheaval. If you haven’t seen Season 1 yet, SPOILERS!!!-> Ned Stark executed; Catelyn Stark now a widow tries to guide her son Robb in war against the Lannisters; Sansa living in a hellish nightmare punished by King Joffrey; Cersei grappling with retaining political control as her son Joffrey seems unable to be controlled; the North secedes from the Seven Kingdoms with Robb Stark as their king; Tyrion Lannister becomes the Hand of the King; Jon Snow joins the Night Watch; Arya disguised as a boy goes on the run to save her life; Daenerys Targeryen loses her husband and son, immerses herself in fire with dragon eggs, and emerges with baby dragons, becoming a force to be reckoned with as a powerful queen. <-END SPOILERS

I love Game of Thrones with its complicated characters, fantastic performances, sharp dialogue, gritty atmosphere and shocking plot twists. I especially love the strong, intelligent, fierce female roles. Sadly, it also suffers from a major gender and race problem. The only characters of color are the Dothraki who have been exoticized as the “Other.” I’ve been extremely critical of the misogyny, female objectification and sexism that plague the series. As Ann, a commenter on my blog, astutely pointed out, it’s not just the women who face a gender problem. Men who exhibit stereotypical “bad boy” masculinity (along with heteronormativity) seem slated to become the heroes while the few noble men who exist are punished.

When I read that there would be an influx of new female characters in Season 2, including those in leadership positions (a sorceress, warrior and ship captain), I was cautiously optimistic. Game of Thrones doesn’t have a problem creating strong female characters. Its problem stems from how those strong women are treated (abused, raped, objectified, treated as property, depicted as weaker than men) and how they react to the oppression surrounding them. After watching the first 2 trailers for Season 2, I wondered if women would fare better this season since the videos pretty much revolved around the men in the show.

As the tagline of Season 2 is “War is Coming,” I worry the female characters will be swept aside and take a backseat to the men. Many people erroneously believe that war is men’s domain, despite its impact on women as they comprise soldiers, political leaders, consultants, casualties and survivors.

With the most recent trailer, I’m a bit more hopeful about the portrayal of gender. The “Price for Our Sins” trailer reveals Daenerys, Cersei, Catelyn, Arya, Shae and Sansa along with new characters Melisandre and Margaery Tyrell. We also hear more female voices than in the previous trailers and it starts and ends with Daenerys, my favorite character whose transformation from meek and docile into a caring yet fiercely powerful queen was the highlight of the first season for me.

I hope Game of Thrones ceases to display female objectification or rape. I hope there’s greater diversity, although of all the new characters I’ve seen, they’re all white. I hope we witness more women fighting oppression and taking control of their lives. I’ll just have to wait and see. Luckily, with tonight’s premiere, I won’t have to wait too long. And I can’t wait to see what the women of Westeros have been up to.

One thought on “‘Game of Thrones’ Season 2 Premieres Tonight…The Wait Is Over!”