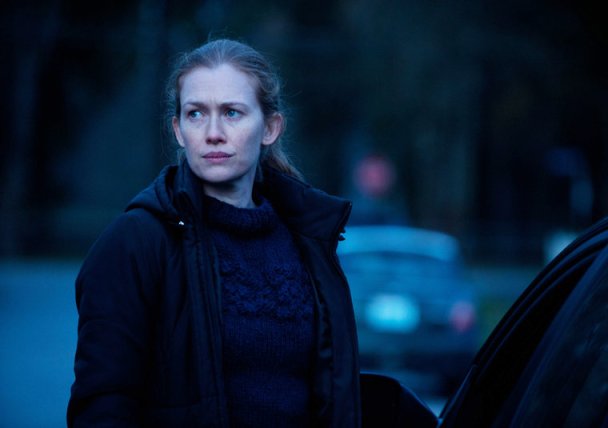 Tonight (4/1), Season 2 of AMC’s The Killing premieres. And I cannot tell you how fricking excited I am!

I absolutely loved the intriguing 1st season, particularly steely homicide detective Sarah Linden. Based on the Danish TV series Forbrydelsen (The Crime), the gritty series is a compelling murder mystery. Detective Linden, played superbly by Emmy-nominated Mireille Enos, is a single mother who plans on leaving Seattle with her son to move to California with her fiance. But she gets pulled back in to one last case. The murder of teenaged Rosie Larsen.

The Killing doesn’t just focus on the detectives or the suspects or solving the murder. It also shows us Rosie’s family. Through the unfolding case, we see how grief affects each of the characters differently. Raising themes of misogyny, racism and xenophobia, the show uniquely focuses on how a tragedy affects a family and ultimately how those ripples affect a community.

The Killing quietly unfolds, pulling you in with its complicated characters, taut suspense and addictive twists. Enos, whose face often tells us everything she’s thinking without ever uttering a word, as the stoic and driven Linden anchors the show. We witness her struggle with her obsessive dedication to her career and seeking justice and her devotion to her son. Joel Kinnaman as Stephen Holder, Linden’s sarcastic and strangely charismatic rookie partner, and Emmy-nominated Michelle Forbes (who’s amazeballs in everything) as Mitch Larsen, Rosie’s distraught mother, also shine with subtle, nuanced performances.

Season 1 left us with some huge cliffhangers. SPOILERS!!! -> Who the hell killed Rosie Larsen? Did Darren Richmond get shot? What’s going on with Holder? Why did he double-cross Linden? Is he as shady as he seems? Is Rosie’s murder part of some larger conspiracy?

Many critics were pissed that we still didn’t discover Rosie’s killer by the finale. And sure it was frustrating. But do all shows have to be easy to watch? Part of the reason I loved LOST so much is that you as the audience had to work for the payoff, paying attention to every detail.

As I wrote before, the mystery is actually secondary to the point of the show. The storytelling comes first and foremost. The murder is merely a vehicle to tell the story and showcase the characters. Sud describes The Killing as “slow-burn storytelling in a sense that every moment that we don’t have to prettify or gloss over or make something necessarily easy to digest, that we’re able to go to all sorts of places that are honest, and dark, and beautiful and tragic, in a way that is how a story should be told.”

In our male-dominated media, it’s refreshing to watch a TV show with female writers, a female executive producer and showrunner (Veena Sud), revolving around an intelligent, determined, complicated and flawed female lead who interacts with multiple unique female characters. With the infuriating cancellation of Prime Suspect, I’m even more excited to return to Sarah Linden’s world.