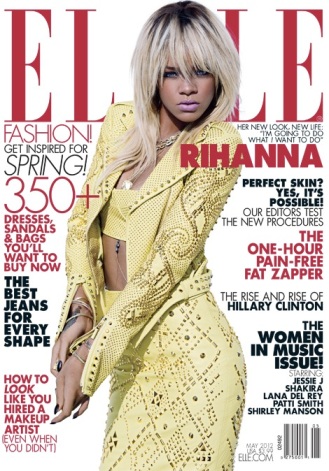 You might have been pissed Rihanna reunited with Chris Brown professionally (I know I was) or that rumors about their romantic reunion continue to swirl. But Rihanna’s not apologizing for getting back in touch (and staying in touch) with her ex-boyfriend and domestic violence abuser. She’s going to do what she pleases.

In May’s issue of Elle, Rihanna talks about the “backlash over their reconciliation:”

“The bottom line is that everyone thinks differently. It’s very hard for me to accept, but I get it. People end up wasting their time on the blogs or whatever, ranting away, and that’s all right. Because tomorrow I’m still going to be the same person. I’m still going to do what I want to do.”

As a domestic violence survivor, I’m worried about the message Rihanna’s decision to get back in touch with Brown sends.

Now, I rarely say celebs must be role models. Rihanna is her own person and of course can do as she wishes. But her reunion with Brown saddens me. Young people have grown up watching their abusive relationship unfold. We live in a rape culture normalizing and glorifying violence against women. Going a step further, Rihanna’s choice might reinforce the notion that domestic violence isn’t really a big deal, cementing the trivialization of partner abuse.

In the U.S., nearly 1 in 5 women has been sexually assaulted and 1 in 4 women will face domestic violence in her lifetime. Society often shames and blames victims of rape and domestic violence. But people don’t bring violence on themselves. Abusers are the ones to blame, not survivors. Domestic violence isn’t just something that occurs between two people in a relationship. It’s an insidious epidemic.

Rihanna fell in love Brown, her best friend and her “first big love.” But their relationship began to deteriorate and turned toxic and dangerous. On her 2010 album Rated R which followed her abuse, Rihanna sang songs like “Russian Roulette,” about how “love is a terrifying game,” and “Man Down,” accompanied by a revenge fantasy video. She “channeled the pain of the assault and the breakup.”

In her 2012 song “Birthday Cake” which Brown collaborated on, apparently Rihanna’s choice, the lyrics about “blowing my candles out,” “betcha wanna put your name on it,” “I’mma make you my bitch,” and licking “the icing off,” all paint imagery of food, sex, domination, ownership and consumption. These lyrics sicken me when I think about Rihanna singing a duet with her abuser.

In Ann Powers’ astute analysis of Rihanna and “Birthday Cake” at NPR, she asserts Rihanna doesn’t want to wear the mantle of a role model, or empowerment or freedom:

“What’s upsetting for those of us who admire Rihanna’s talent and boldness — and for me as a feminist — is that she has clearly not taken up the narrative of women’s enlightenment and self-liberation. Quite the opposite — the story she wants to tell is the one in which the endangered woman doesn’t get out, or leaves for a while but comes back, or at best does leave, but can’t resolve the mixed feelings she has about her choice.”

“The original moment of upsetting intimacy should be canceled out by the new moment of empowerment—in our seeing that she chooses Brown. It’s just that, with that photo in the back of our minds, we can’t help but worry about her fitness to judge.”

Despite my disappointment over Rihanna’s decision to contact her abusive ex, I made the same mistake. I survived not one but two abusive relationships. After I broke up with one of the exes, I tried to remain friends with them. But I eventually had to ask myself, “What the fuck are you doing??” I wouldn’t want one of my friends associating with their former abuser. So why was I? That’s when I cut off all contact.

It’s not easy to break the cycle of abuse. When someone abuses you (physically, emotionally, psychologically, fiscally), it doesn’t necessarily mean you stop loving them. Abusers often promise they’ll never do it again. And it’s so tempting to believe they’ll change. Survivors often blame themselves, thinking they could have done something different or that they somehow provoked the abuse. Some survivors desperately want to leave but can’t, worried they have nowhere to go and no way to support themselves. Or their partner threatens to take away their children or report them if they’re an undocumented immigrant. That’s why it’s so hard to leave and why so many return.

Some people say that because Rihanna forgave Brown, so it’s okay, we should all forgive him. Or because time has passed, it’s been 3 years, it’s okay. No, it’s not fucking okay. And others have voiced that they don’t believe Brown should be forgiven or that he should’ve performed at the Grammys. Brown is on probation till 2014 yet the Grammys still let him perform. And I’m sure commercialism and profit motivated their decision. But it also sends a clear signal: that abused women don’t matter.

Sasha Pasulka wrote a brilliant piece at Hello Giggles about how she’s not okay with Brown performing at the Grammys. She asserts that Rihanna is probably tired of “being a poster child” for domestic violence survivors and is “under no obligation to speak out about” her abuse. “But someone has to” and she’s shocked more people aren’t speaking out:

“We – the grown-up influencers in this country, the people with platforms and with educations and with power — are allowing a clear message to be sent to women: We will easily forgive a person who victimizes you. We are able to look beyond the fact that you were treated as less than human, that a bigger, stronger person decided to resolve a conflict with you through violence. We know it happened, but it’s just not that big of a deal to us.”

But domestic violence is a big deal and should outrage us all. And that anger should motivate us to speak out and support survivors.  Caperton at Feministe wrote:

“This is why we should still be upset. This is why we can’t just let it go. Because girls and women don’t just see his violent assault as a non-issue–they see it as a joke. Regardless of whether he ever beats a woman again or whether he feels really, really bad about what he did (of which we have yet to see evidence), if the response from anyone is “It’s okay if he’s hot,” it means we as a society have a lot more work to do. If the response is, “LOL domestic violence is so funny,” I have no idea where to even start.”

So why does it matter what Rihanna does? Because it influences young women and their opinions on relationships. Some teens believe Rihanna got what she deserved. This past February, those horrifying and disturbing tweets surfaced where women claimed they would let Chris Brown “beat them any day.”

But this is symptomatic of a larger societal problem — a culture that normalizes violence against women, dismisses survivors, tolerates abuse and trivializes domestic violence.

“The women who offered themselves up for a Chris Brown face punching are not the problem; they’re the symptom of a culture that teaches people (and especially young women) that love is submitting to your partner’s ever whim and not holding them to any sort of behavioral standard.”

This is the world children grow up in. And it’s fucking frightening.

For me, I realized I deserved a healthy relationship, not one mired in abuse and shame. And that’s what made me eventually leave. We need to teach young women that they deserve better. We must teach children and teens that it’s never okay for someone to put their hands on their partner. Love should never hurt. Ever. These are the messages we need to send to young women and men.

Rihanna isn’t responsible for the fucked-up world we live in. She’s under no obligation to discuss her abuse and it’s certainly not her responsibility to fix social ills. She did absolutely nothing wrong; Chris Brown did. But I wish Rihanna would pause a moment and think about how people, especially young people, will view her actions and internalize her choices. Young women and men need to know that domestic violence isn’t something to be taken lightly.