Romantic comedies usually make me want to gouge my eyes out. Now, that doesn’t mean I hate them all. Some of my favorite films are rom-coms. But every now and again, one comes along that entertains rather than enrages me. Following in the footsteps of female-fronted comedies Bridesmaids, Young Adult and Girls (all of which I love), Lola Versus follows a single woman making horrendously bad decisions yet struggling to find her way.

Indie muse Greta Gerwig — hands down the best part of Greenberg — plays Lola, a 29-year-old woman whose life is about to unravel. Not only is she on the precipice of turning 30 (a potentially introspective time in any woman’s life), her fiancé (the effortlessly charming Joel Kinnaman…watch him as Holder in The Killing…simply brilliant) breaks up with her shortly before their wedding. Like 3 weeks before their wedding. Understandably, her world crumbles around her.

Lola is sweet, intelligent and articulate. Gerwig imbues her protagonist with vulnerability and quirky humor. And she’s an absolute mess. A disaster. Lola doesn’t know what she wants or what to do with her life. She now has no man, no fabulous NYC loft to live in any longer, and she’s suffering from writer’s block while trying to complete her PhD dissertation.

Supporting Lola through her break-up are her best friends Henry (Hamish Linklater, who I will forever think of as Julia Louis-Dreyfuss’ brother on New Adventures of Old Christine) and Alice (Zoe Lister Jones, who also co-wrote the script).

As she tries to move on, we witness Lola ask a man to put on a condom and take a pregnancy test. Not only is it great to see aspects of sex and reproduction. It’s refreshing to see a woman exert her sexuality but not be defined by it merely an object for the male gaze.

While it started off promising, I gotta admit, the bulk of Lola Versus pissed me off.  I wanted to shout at the screen, “No, Lola!! Don’t sleep with him!” or “Spend more time with your girlfriends!” or “Don’t believe him that he’s clean…whatever the fuck that means…make him wear a fricking condom!!” or “Stop smoking weed with (and being nice to) your ex-fiancé who dumped you!”

By the end of the film, I realized I wasn’t mad at the movie per se. I was pissed at Lola’s bad choices.

But isn’t that life? Isn’t that what people do when they’re dumped? They obsess over their exes, retracing the steps of their relationship, trying to deciper the clues that led to the relationship’s unraveling. They pine for them. They strategize ways to accidentally run into them (or avoid them like the plague). Either way, there’s a lot of strategizing involved. I wanted Lola to be empowered. To stop obsessing over nice but douchey guys who didn’t appreciate her or who weren’t right for her. I wanted her to hang out with her female friends. But the way the plot unfolded rang more realistic and way more uncomfortable. 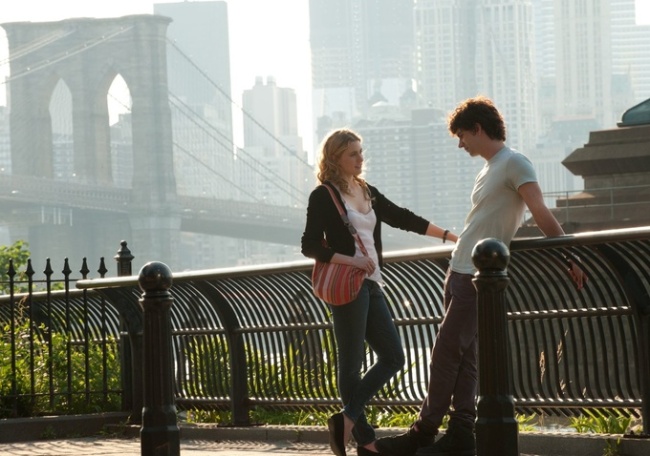 In an interview with Collider, Gerwig shared how the script spoke to her because Lola was such a hot mess:

“Sometime female characters, especially in the genre of something that people consider rom-com, make mistakes in a cute way or they’re a mess in a way that’s palatable. I like that Lola is a real mess. She’s making big mistakes and it’s not just cute. It’s destructive and self-absorbed and not awesome and she has to recover from that. She stands to damage relationships around her. Even as this crappy thing happens to her at the beginning of the movie, she uses that as an excuse to behave badly for the next year of her life. I like movies about women behaving badly, because women behave badly just like men, and we’re not always adorable and cute about it.”

Gerwig is absolutely right. Women in film aren’t usually allowed to be messy or unlikeable. Although that’s slowly changing.

Lola Versus made me uncomfortable because it reminded me of too many of the bad decisions I’ve made in my life. Falling back into sleeping with people I shouldn’t. Agonizing and analyzing every single conversation. Calling an ex, desperately hoping to rekindle that spark. Settling for someone not that great in a vain attempt to fill the gaping void that my partner’s disappearance has left.

I eventually stopped all this time-sucking nonsense. I thought by hanging onto relationships, I was boldly forging ahead seeking my happiness. But that’s not what I was really doing. I was placing my happiness in the hands of others. And so was Lola.

The movie tackles the topic of single women and aging. As we approach or pass turning 30 (like me!), we contend with societal expectations. Not that turning 30 is some horrible harbinger of doom. Quite the contrary. I’ve been more confident and comfortable in my own skin after turning 30. But it’s still hard to silence the social cues that tell us our lives should fall into place in a certain pattern.

Here’s the thing about Lola Versus. It frustrated me and I rarely laughed out loud. Although the scene where she screams at the party…priceless. But Gerwig mesmerized me and the film enthralled me. It passes the Bechdel Test (yay!!!). And it boasts one of the absolute best endings I’ve ever seen in a film. Ever.

In every romantic comedy, it’s all about two people getting together in the end. Or if it’s really radical — and trust me, I use that term facetiously — they’re already together in the beginning and it’s about the two lovers facing obstacles but ultimately staying together. The only rom-coms I can recall that deviate from this predictable paint by numbers path are Annie Hall, The Break-Up and Kissing Jessica Stein.

I don’t want to spoil the ending. But I will say this. (Aver your eyes if you want to be completely surprised) Lola achieves happiness, something that had eluded her all along. She suffered writers’ block, not being able to silence the voices and noises in her head — ironic since her dissertation was analyzing silence in film — but now she could write again. She became happy with who she was and with her life.

And it had nothing to do with a man.

Now that doesn’t mean she says fuck you to all her relationships. While she knew how to love other people, she didn’t know how to love herself, a lesson most of us need to learn.

Lola talks about Cinderella with her mom (Debra Winger…so glad to see her in more films!). She tells her that she liked Cinderella as a kid but how fairy tales are toxic, teaching girls to wait for a man to sweep them off their feet and give them shoes. Fairy tales set women up for failure. We put these unrealistic expectations on love and romance. Now, I’m not arguing for settling, not by any means. But fairy tales teach girls that when they grow up, they should wait around for men; that they should put romantic relationships before everything else in their life even sacrificing themselves. Lola realizes that she must navigate her own happiness rather than relying on a man or some lofty romantic fairytale.

Too many romantic comedies subject women to stereotypical gender roles. Needy, passive, just out to find a man. Can’t romantic comedies be intelligent? Can’t they highlight the importance of female friendship too?? Yes, yes they can. And Lola Versus does.

One of my favorite lines in the film is when Lola says:

“In this world of shipwreck, there’s hope in uncertainty.”

Isn’t that what we do in this world? Try to salvage the wreckage of our disappointments, losses and broken hearts, forging ahead and charting a new course?

Through her relationships, Lola discovers what she truly wants from life. She realizes it’s okay to have your life in tumult as long you’re happy with yourself. Throughout the film, I kept rooting for Lola — for her to find her place in the world. I was rooting for hope. And ultimately, I was rooting for myself.