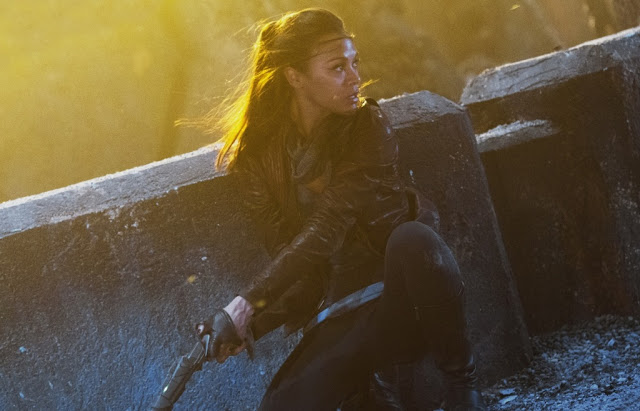 Yes, I am a Trekkie. I’ve been a huge fan of Star Trek ever since I was a kid. The camaraderie of Star Trek: The Original Series, the intellectual and moral conundrums on Star Trek: The Next Generation, the political intrigue and exploration of social issues on Deep Space 9 — I love them all.

In the 60s original TV series, Lieutenant Uhura was a ground-breaking role. It was one of the first time audiences saw a black woman on TV who wasn’t a maid or a servant. She was also part of the first interracial kiss on TV, although that always bothers me as it was against her wishes due to mind control. Uhura’s occupation as the Enterprise’s Communications Officer inspired women (Dr. Mae Jamison, Sally Ride) and African-Americans (Dr. Mae Jamison, Guion Bluford) to become astronauts. We can’t be what we can’t see, one of the reasons media impacts our lives so deeply.

Yet the original Star Trek didn’t exactly delve deeply into Lt. Uhura’s personality. However, we can glean a few things about the Communications Officer. Adept at languages, she was ambitious, climbing through ranks to eventually become a Commander. She enjoyed music and loved to play instruments and sing. She doesn’t really have a tangible persona, not compared to roguish and rebellious Kirk, rational and logical Spock or emotional, metaphor-spewing Bones. So it’s great to see the extremely talented Zoe Saldana — who I will seriously watch in anything — imbue the iconic character with more complexity and depth as an opinionated and assertive woman.

In the original series, Kirk, Spock and McCoy form the central trio. But in Star Trek Into Darkness, Uhura replaces McCoy so now there’s a woman of color in the triad. A lady broke through the boys’ club barrier!! But won’t her ladyparts contaminate the brotastic bond??

Is Uhura in Star Trek Into Darkness a strong-willed, intelligent, assertive badass? Or merely relegated to the role of a dude’s girlfriend? She’s both. 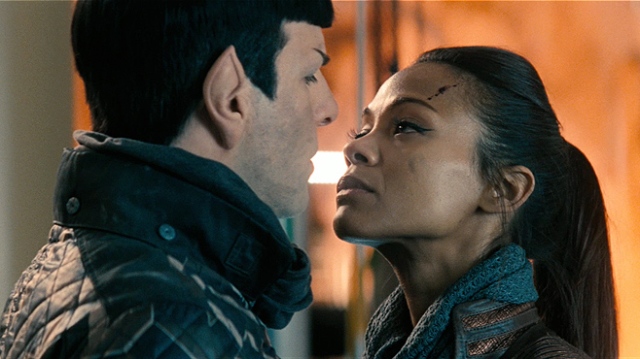 Uhura and Spock share an effortless chemistry. As we saw in the first Star Trek film, despite their difference in rank, they appear to be equals in their romantic relationship. Uhura possesses agency, despite her romantic involvement. She’s the one who demands Kirk let her negotiate with the Klingons rather than shooting first. She’s the one who insists on being beamed down to help Spock in the film’s climax. No one is making decisions for her. She’s making them. She’s not afraid to voice her opinion. When she’s pissed at Spock, thinking he held little regard for his life, she’s unafraid to confront him even though Kirk, her boss, is present.

Part of me loves that Uhura, a black woman, is the one in the romance. Too often we see white women play out that plot. Black women often remain on the sidelines as the feisty sidekicks, giving their white friends advice on love. Lucy Liu recently lamented about racist stereotypes in Hollywood, how people don’t think of her in a romantic comedy. While not a rom-com, it’s great to see a woman of color get the guy.

But it pisses off another part of me that Uhura’s role in Star Trek Into Darkness is ultimately defined by her relationship to a man, even though that relationship often takes “a back seat to the bromance between Spock and Kirk.” Uhura’s role as girlfriend exists to convey Spock’s humanity. Uhura is upset at Spock that he seems so cavalier in a life-threatening situation, not giving their relationship a second thought. He assures her that he cares deeply but doesn’t want to endure the anguish of fear. They have a genuine conflict that I wish had been explored more. In the emotional climax, Spock loses control of his emotions due to his feelings for Kirk, not Uhura. Again it feels like it’s all about a dude.

Even though the other female character in the film Dr. Carol Marcus, a weapons specialist for chrissake, she’s ultimately defined by her relationship to a man too — her father, an ambassador and head of Starfleet. She’s also been called the worst damsel in distress ever. Not sure I’d say the worst but yeah it’s pretty bad. Oh and of course we see her in her underwear, for no reason other than to show Kirk ogling her. (In case you’re not familiar with original Star Trek, Dr. Marcus also happens to be the mother of Kirk’s son — another way her character is defined by a man — although she’s also the creator of the Genesis Project, which is pretty badass. But who knows if this will even transpire in the subsequent reboot series.)

I copped to the fact that we should
have done a better job of not being gratuitous in our representation of
a barely clothed actress.

We also had Kirk shirtless in underpants in both movies.Do not want to make light of something that some construe as mysogenistic.

What I’m saying is I hear you, I take responsibility and will be more mindful in the future.
— Damon Lindelof (@DamonLindelof) May 20, 2013

Also, I need to learn how to spell “misogynistic.”

While it’s nice that he acknowledges their folly, even after he apologizes, it’s more a half-assed excuse as he mentions Kirk is shirtless. No, no. I just can’t. I’m not going to go into all the reasons why reducing a woman whose defined by men to a sex object specifically for the Male Gaze is so NOT the same as showing a man shirtless. Just trust me. It’s not the same. At all.

I complained in Iron Man 3 of Pepper Potts’ faux empowerment, essentially fulfilling the Damsel in Distress trope. While others have claimed Uhura becomes the Damsel in Distress too, I disagree. While women overall get a pretty shitty treatment in the film, Uhura’s agency is not stripped away. She voices her ideas, desires and annoyances. Unlike Pepper, Uhura fearlessly expresses her opinions and holds steady to them.

When Klingons surround Uhura, Spock and Kirk’s small spacecraft, Uhura decisively asserts herself. She tells hot-headed Kirk — who of course wants to charge out with guns blazing – that he brought her there to speak Klingon. “So let me speak Klingon.” Uhura wants to be the diplomatic negotiator resolving the situation. Huzzah! Oops, when negotiations go awry things, it’s testosterone to the rescue. And yes, Uhura gets saved by a dude. Annoying. However, in the ensuing melee, Uhura grabs a dagger off a Klingon who was going to kill her and kills him first in self-defense. Later in the film, she asserts herself again when she beams down to help Spock against villain Khan.

Star Trek Into Darkness also makes an interesting commentary on stereotypical masculinity. While Ambassador Marcus is aggressive, looking to kill Khan, Kirk learns the importance of following the rules to ensure justice. It initially seems like a denouncement of toxic hyper-masculinity. Ahhhh but not so fast. The climax of the film, the showdown with Khan, isn’t resolved with logic or cunning. Nope, it’s with good old fashioned testosterone as Spock, now in touch with his anger after a Wrath of Khan reversal and the death of Kirk, beats the shit out of him.

Speaking of Khan, while it’s awesome to have an intelligent woman of color featured so prominently in the film, the egregious whitewashing of Khan cannot be ignored. In Star Trek the Original Series and the film Star Trek II: The Wrath of Khan, Khan Noonian Singh was a genetically engineered human augment, a product of the eugenics wars. As a Sikh from Northern India, he was a composite of a variety of ethnicities played by the charismatic Ricardo Montalban, aka one of the awesomest villains. Ever. But in Star Trek Into Darkness, it’s a white dude. Sure Benedict Cumberbatch does an okay job. But this racist whitewashing “is a slap in the face” to the audience as well as Gene Roddenberry’s vision of bringing people together from around the globe and galaxy “by a mission of exploration and diplomacy.”

So why am I going off on a tangent about Khan when this is an article about Uhura? Because the ancillary racism and sexism bolsters the film’s message. The original Star Trek series was groundbreaking in its depiction of gender and racial diversity and exploration of social issues. But we don’t live in the fucking 1960s anymore. JJ Abrams clearly doesn’t want to do anything different or “boldly going” anywhere when it comes to dismantling oppression and heralding diversity.

JJ Abrams created strong female characters in Alias (a female-centric series) and Lost, two of my favorite TV series. He showcased female friendship between Sydney and Francie, Sydney and Nadia, Kate and Claire, Kate and Sun. And Lost would have been female-centric too if the networks hadn’t made him change the leader of the survivors from Kate (whose character was more like Rose) to Jack. However, when you start to look at his treatment of characters of color, sadly most of them die on both shows. But in Star Trek Into Darkness, he seems a bit too concerned with harkening back to the good ole’ days of yore. You know, the ones filled with sexism and racism.

It’s strange in a film that objectifies women and defines them by their relationship to men, we simultaneously see an intelligent, decisive and opinionated Uhura. Aside from Uhura’s rank as a lieutenant, we see no women in leadership roles. No women captains, no women ambassadors, no women number ones (second in commands to captains). Uhura possesses no female friends. She doesn’t talk to a single woman at all. Not one. Not even underwear-clad Carol.

Yes, Uhura rocks. And yes, she asserts her agency. But no matter how opinionated, smart and fabulous she is, the gains made by Uhura begin to erode when you factor in the incessant sexism swarming around. As I’ve said time and again, if you depict your female characters, no matter how empowered, as only talking to men and not other women, it reinforces the notion that women’s lives revolve around men. Even when women possess agency and intelligence and a budding career, Star Trek Into Darkness perpetuates the trope that women are not complete or whole unless they’re helping a man, looking sexy for a man, or a man stands at their side. Bearing the name of an iconic boundary-busting, visionary series, I expect more.

One thought on “Does Uhura’s Empowerment Negate Sexism in ‘Star Trek Into Darkness’?”