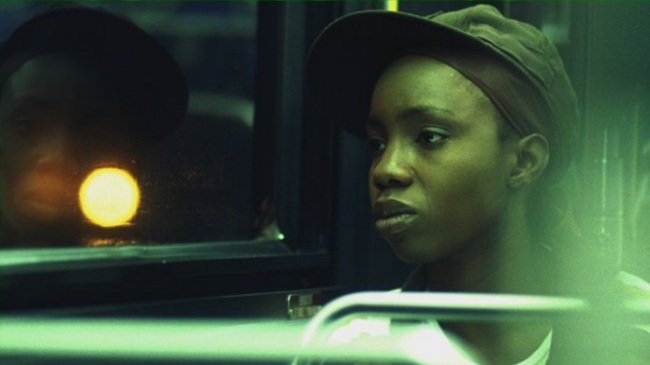 “Who do you become if you can’t be yourself?” Pariah, my absolute favorite film of 2011, tackles that question.

Written and directed by Dee Rees and produced by Nekisa Cooper, the powerful, award-winning Pariah tells the story of Alike (Adepero Oduye in an astounding performance), a 17-year-old black lesbian in Brooklyn. Studious, artistic and sensitive, Alike is a writer who knows who she is but hides her sexuality from her family. We so rarely see positive portrayals of black women and queer women on-screen. Here, we have the privilege to see both. With subtlety and grace, it’s an exquisite and achingly beautiful female-centric coming-of-age film about a young woman discovering her sexuality and asserting her identity.

Carrie Nelson already wrote an articulate and intelligent review of the award-winning film. You should seriously go read it! But I want to touch on a few points that particularly struck me while watching, particularly about gender performance and identity. Most films don’t address teenage sexuality. Sure they may objectify women or poke fun at raging hormones. But they don’t often explore how teens’ discover their sexuality, especially women’s sexuality, people of color’s sexuality, or queer sexuality.

Throughout the film, we receive visual cues to Alike’s gender performance. When we first see Alike in a club, she’s wearing a loose men’s jersey, baggy jeans and a baseball cap. She’s emulating her butch best friend Laura (Pernell Walker). On the bus home, Alike removes her hat and shirt, revealing a form-fitting top. She puts on earrings. All for her overprotective, lonely and overbearing mother Audrey (Kim Wayans). When she’s around her mom, Alike wears stereotypically feminine clothing. Flouncy skirts, dresses, snug blouses – all clothing that “shows off her figure” like her mother wants. form-fitting tops. Her mother buys her these clothes, knowing full well that Alike abhors wearing them. Yet refusing to accept her daughter, trying to orchestrate her daughter’s identity.

Alike’s mother can’t handle the fact that her daughter is a lesbian. Audrey shows a colleague at lunch a fuchsia sweater she bought for Alike. She tells Arthur (Charles Parnell), Alike’s father, that she’s “tired of this tomboy thing she’s doing.” Yet Alike tries to express herself, telling her parents that the sweater “isn’t me.” Alike’s identity contradicts her vision of her daughter that she imposed on Alike. Alike’s father is more protective of her as she’s a “daddy’s girl.” Yet he refuses to admit or see the signs that Alike might be a lesbian. Between the two is Alike’s sister Sharonda (Sahra Mellesse) who knows about her sexuality and loves her regardless.

Whenever Alike leaves home, she transforms herself into the identity she chooses. At school, we see her rush to the girls’ bathroom to change. She adopts a more masculine appearance to coincide with her gender non-conformity. Laura buys Alike a strap-on to have sex with a woman. But Alike’s uncomfortable wearing it (it’s white, it pinches her) and ends up throwing it away.

For Alike, both sets of clothing – the hyper-masculine and hyper-feminine – are a costume. She rebels from the princess wardrobe her mother wants for her by going to the other extreme, exploring if it’s who she is. But neither appearance encapsulates Alike. Both the butch and the femme identities are disconnected from her personality.

In an interview, Rees, an out lesbian herself, said Pariah is about identity and finding your place in the world:

“Alike’s a woman who knows she loves women, and is sure in that, but her struggle is how to be. Her struggle is a more nuanced struggle of gender identity within the queer community. She’s not the same person that (her friend) Laura is, neither is she this pink princess that her mother wants her to be. She falls somewhere in between. Finding the courage to carve out that space is her journey.”

Audrey suspects her daughter is a lesbian or at the very least is attracted to women. But she tries to derail Alike’s sexuality. Audrey forces Alike and the charismatic Bina (Aasha Davis), the daughter of a work colleague and one of Alike’s classmates, to spend time together in a vain attempt to separate Alike from hanging out with Laura, who’s own mother has disowned her for being a lesbian. Alike tells her mother that nothing is going to change, Audrey replies, “God doesn’t make mistakes,” as if homosexuality is a mistake. But Audrey’s plan backfires as Alike and Bina bond over music and share a growing attraction to one another. 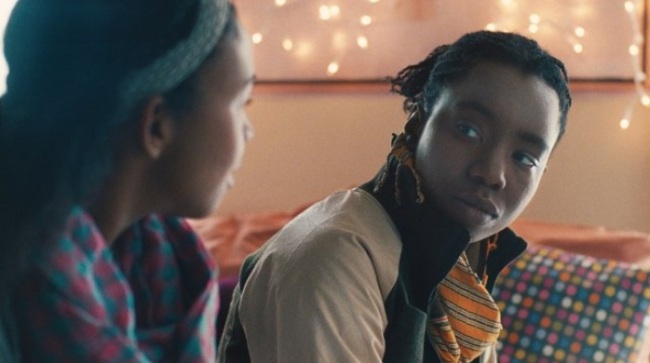 Drawn to one another, Alike and Bina have sex. Despite their shared intimacy, Bina rejects Alike. Breaking Alike’s heart and devastating her, Bina tells her she’s not “gay-gay” and asks her to keep their encounter secret. We see that Bina possesses sexual fluidity yet is afraid to commit to a woman, perhaps due to society’s heteronormative standards. Or maybe she doesn’t want to commit to anyone, male or female. Or maybe she’s an insensitive asshole.

Whatever Bina’s motivations, Alike’s heartbreak ushers in her refusal to bury her identity any longer. Amidst a huge fight between her parents, Audrey angrily tells Arthur, “Your daughter is turning into a damn man right before your eyes.” Alike tells her parents she’s a lesbian, which enrages her mother. Audrey hits her repeatedly, her father trying to restrain her, after Alike finally confirms what her mother already knew.

Alike turns to Laura (who tries again to reach out to her mother after she earns her GED) for solace and support. Both women are able to commiserate as friends and as lesbians rejected by their mothers’ gendered expectations.

By the end of the film, we see Alike’s clothing change again. Adopting some of Bina’s style fused with her own – perhaps to convey that she’s learned from her heartache or it may be her acknowledgement of her sexual transformation – she wears scarves and earrings with jeans. No longer shadowing Laura and no longer conforming to her mother’s gender binary, Alike rejects the gender binary of butch and femme, a symbolic balance of her identity, a unison of femininity and masculinity.

Alike divulges her feelings through spoken word. Her poem at the end of Pariah is hauntingly stunning (making me weep uncontrollably), echoing her painful yet ultimately freeing journey towards self-acceptance:

“Heartbreak opens onto the sunrise for even breaking is opening and I am broken, I am open. Broken into the new life without pushing in, open to the possibilities within, pushing out. See the love shine in through my cracks? See the light shine out through me? I am broken, I am open, I am broken open. See the love light shining through me, shining through my cracks, through the gaps. My spirit takes journey, my spirit takes flight, could not have risen otherwise and I am not running, I am choosing. Running is not a choice from the breaking. Breaking is freeing, broken is freedom. I am not broken, I am free.”

Pariah shattered my heart with its aching beauty, uplifting my soul. We are allowed a window to witness her journey and self-discovery. Through her wardrobe and poetry, Alike eventually expresses herself as a lesbian in the way that she wishes. Alike insists she’s not running, she’s choosing. While she means this literally, there’s  meaning beneath the surface. No longer running from who she is, Alike chooses to embrace her identity. Watching Alike discover and assert herself is beauty, poetry in motion.