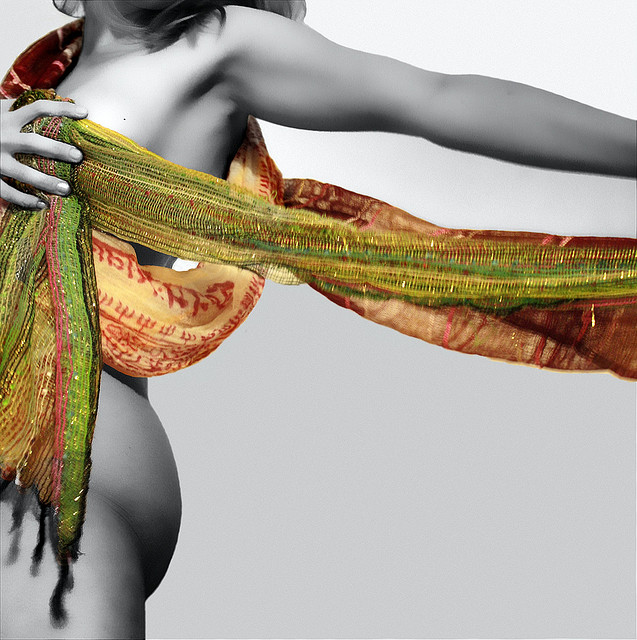 Sleepovers with my step-sister B. were the best.  When she came over, the whole house and yard became full of imagination and play.  The living room turned into a swamp full of alligators, as we scrambled from couch to loveseat or pillow to pillow to avoid being chomped by menacing jaws that wanted nothing more than little girls.  My Barbie house would come to life for hours, as we made up stories with cases full of dolls while listening to Michael Jackson’s Thriller.  Sometimes the Ken dolls would even play MJ and Paul in “The Girl is Mine”, with Barbie swooning at the sidelines.  Even then, we had learned that girls should like it when boys fight over them.

B. is a few years older than me, and I looked up to her.  At night, we would talk long after the lights had gone out, chatting about friends and school happenings.  My quiet, introverted self also trusted her enough to share my struggles, things that were bothering me.  One of those things was the teasing I endured at school.  You could say I had my share of awkward stages while growing up.  I was a chubby girl, often surrounded by slim, lithe friends.  My adult teeth had a mind of their own as they grew in, with my top incisors opting to stick out instead of resting side by side with the rest.  Vampire-like, you could say.  Classmates certainly did.  As they often do, some of my classmates noticed these differences and made sure I knew it.  I became a target of teasing because of my weight and my teeth, enduring name-calling, teasing, and taunting that I wasn’t good enough.  Or that I didn’t look good enough.  For me, it meant the same.

I would share these stories with B., tell her the names I was called, the hurt I felt when I became a target for classmate boys and even girl friends when we were entangled in verbal, passive aggressive “fights”.  (Girls can be  so horrible to each other.)  I would come home crying, my mother upset but feeling helpless.  I could almost literally feel my self-esteem dissipate a little more with each incident.  B. would listen to my sadness in these stories as we chatted in the dark, and she would attempt to cheer me up.  We would talk about the kids who were bullying me, what I could say to them and how they often weren’t so perfect either.  Sometimes we were admittedly mean ourselves, giggling at my classmates’ own issues, but I only ever once brought one of those comments out of my bedroom.  While I felt awful making my own mean statement in retaliation, I wasn’t on the receiving end of nasty teasing from that playmate again.

This past week [on October 19th], Love Your Body Day was recognized as an opportunity for women to celebrate themselves, bodies of all shapes, sizes, and abilities.  As a woman who has struggled with her body-image since those elementary school years, this day marks both that struggle and my constant reach for something better, for healing.  Sadly, my struggles with body image didn’t end in elementary school.  ‘Tweenhood and adolescence brought early development, braces, and really bad bangs and permed hair.  Really bad.  *shudders*  I retained my chubbier size and was often on the sidelines or at least unnoticeable in gym class.  I was a reader, not an athlete.  I never tried to be an athlete; I felt awkward in my body and wanted to fade to the background and not stand out.  I did the same in the classroom.  A standout student who often knew the answers or could contribute to the discussion but stayed quiet, I never wanted to draw attention to myself.  After all, if you’re not noticed, no one will see and pick apart your perceived flaws.

In high school, I started to become more aware of how diet could change my appearance.  I admittedly loved Devil Dogs, Hostess cupcakes, and ice cream while growing up.  Weekends with my dad often included stops for 3 Musketeers and chocolate chip ice cream for dessert.  Late night snacks at home were a heaping bowl of ice cream or maybe some Oreos.  Apples and bananas and fruit were often available but not the first choice.  With teen angst and diet advice filled teen magazines, I discovered the harm these foods were doing, not so much for my health and body on the inside, but for my hips.  For a period of time, I ate only an apple for lunch.  Everything became fat-free or low-fat, and I relied on Snackwell’s cookies or fat-free fro yo for sweet treats.  Nevermind the sugar or processed ingredients in these snacks.  But, hey, this wasn’t about health; it was about weight.   Peanut butter on PB&J sandwiches became a minimal, slim layer.  While working at a movie theater, I thought I was thoughtfully choosing (high fructose corn syrup filled) Hawaiian Punch instead of equally bad soda.  My choices were questionable, but I thought I was doing what I should to find that slimmer me.

As an adolescent and young woman, I also began to see how my eating was tied to my emotions and appearance.  In college, when my ex broke up with me for a short period of time, I lost my appetite and didn’t eat much for weeks.  I reaped the “benefits” when I lost weight, and was rewarded with compliments.  The same thing happened when my ex and I later separated and divorced.  For weeks, my appetite was minimal, and, even when that passed, I continued the trend for months and controlled my daily diet so that food intake totaled, maybe, 600 to 700 calories.  I slimmed down to my smallest size ever, without stepping foot in the gym.  I liked my reflection a little more and really liked the compliments.  The near fainting spells and stomach growls I did not like.  But, again, this was not about health.  And, I still didn’t love my body.

Other efforts to lose weight and find body love centered around exercise.  Hours were spent on the elliptical, watching TV or reading “be a prettier, sexier, slimmer you” magazines while mindlessly propelling myself along.  I was often bored, and although I felt proud when I was done, I also sighed with relief.  It was all done with the same goal: please let me lose weight, so I can be prettier, sexier, more attractive, more likeable, more noticeable . . . in other words, so I can finally, maybe, like my outside self.  And other people could like my outside self, too.

Despite, or even because of, these tribulations, and because of  my new vegan lifestyle, this year’s Love My Body day means something more to me.  I feel like I may finally be moving past all this crap.  Since going vegan (and I would not say since going vegetarian), my mindset has shifted pretty dramatically.  I now have reasons why I make the food choices I do, reasons others than the effect on my abs.  I have ethics.  I don’t eat animal products not because some acclaimed diet book told me not to, but because I no longer feel it’s the right, moral thing to do.  Nor do I think it’s healthy for my arteries and my heart and my cells and my future.  I boldly defy the guidelines of certain diets by eating carbs,  bananas and potatoes and sweet potatoes and brown rice and quinoa.  Why?  Because they feel good and they’re good for me.  As for that common question, has veganism helped me to lose weight?  Have I become a long, lithe yogi vegan that we all picture when we hear the word?  No.  I may have had some slight weight change, but honestly not much.  I’m certainly thoughtful about what I eat, but not overly restrictive.  I enjoy the occasional handful of dark chocolate covered almonds and really enjoy baking treats like the Pumpkin Chocolate loaf I made two days ago.  As such, I’m, still, much more Joan Holloway than Betty Draper.    The difference?  I’m ok with that.  I’m healthy, active and making smart food choices that center around green smoothies and homemade veggie and bean burgers with sprouted grain breads.  I’m now accepting that I will likely not get to that very slim frame that I discovered when I was physically and emotionally unhealthy.  And if that’s what I need to do to get there, it’s simply not worth it.

Along with healthy, vegan food choices, and how things are feeling on the inside, I’ve started focusing on and recognizing what my body can actively do.  While growing up and as a young woman, the first physical activity that stimulated pride in my body’s capabilities was dance.  During my sophomore year of high school, I took a funky jazz class and suddenly realized that my body could move.  Hips, ribs, shoulders . . . I could suddenly move in ways I had no idea were possible for me.  It was challenging and tough, and I struggled at times, but it was invigorating, and I constantly strove to do better.  I loved it.  Since then, the only activities that have come close to that feeling have been yoga and, currently, outdoor running.  Not mindless disengagement on the elliptical or treadmill.  Not engrossing myself in a how to lose weight or how to please your man article while moving my legs and arms along.  Actively being present while outdoors and moving my body.  Constantly aiming for progress and improvement, just as I did in dance class.  The difference has been incredible.  (Now, I just gotta get back to yoga. . .)

So, for all you ladies, and men, out there, for whom this post resonates (sadly, I know there are tons of us), I hope you’re also able to find your own balance and ability to love, or at least mostly like, your body.  Veganism has been the push for me.  What is it for you?

Erin Plante is an animal loving vegan learning to cook, bake, live, and thrive cruelty-free. She’s a runner in training, a home health and hospice social worker, and a passionate feminist.